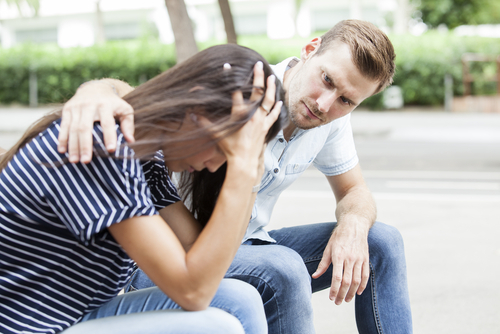 When tragedy hits, it is human nature to want to help. We bring food; we do laundry; we offer childcare. We want to connect!  Some people do this through service; others do it through commiseration. We often feel the need to relate to the person suffering by sharing our own experiences.

President Henry B. Eyring explains that it is only natural to want to help; it's a feeling amplified by the covenants we made at baptism:

“You have seen such tests in the lives of good people you love. You have felt a desire to help them. There is a reason for your feeling of compassion for them.

You are a covenant member of the Church of Jesus Christ. A great change began in your heart when you came into the Church. You made a covenant, and you received a promise that began changing your very nature.

That is why you have a feeling to want to help a person struggling to move forward under a load of grief and difficulty. You promised that you would help the Lord make their burdens light and be comforted. You were given the power to help lighten those loads when you received the gift of the Holy Ghost.”

But how do we know what to say to lighten those burdens?

What Not To Say

When my father was diagnosed with stage IV lung cancer and was only given three to six months to live, we noticed the desire others had to comfort us. We appreciated the outpouring of love and faith we received.

Most interactions were positive.

What I didn’t expect, however, was that we would also be inundated with stories that were anything but uplifting. These people meant to help, but their poorly chosen words had the opposite effect.

When it comes to cancer, everyone has a story about how it has affected their lives. Unfortunately, cancer is a beast and the outcome isn’t always a good one. This often leads to someone, in an effort to relate, sharing cancer horror stories with the grieving person who is more than likely still reeling from their loved one’s cancer diagnosis.

Just two days after learning my dad may only have months left, one sister in my ward actually offered to help me plan my dad’s funeral. After I recovered from the shock, I thanked this sweet sister, who was clearly only trying to help, and made some pithy joke about hoping to keep him around a bit longer than that. I also said a prayer of gratitude that this was said to me (with my uncanny ability to not show emotion) and not to my grieving mother or sisters.

Logically, I knew that these well-meaning neighbors and ward members were only trying to relate to our plight—they wanted us to know that we weren’t alone and that everyone goes through trials.

Emotionally, I wanted to scream and cry and shout at the person, “No, it’s different! It’s not the same—it has never happened to MY DAD.” I didn’t need to hear a recitation of all the people they had known who had died of cancer or how long some other person suffered. In that moment, the only cancer that mattered to me was my dad’s and I needed to know that everything would be all right. Even if it wasn’t all right, I needed the hope that it would be.

When someone is dealing with a tragedy, we don't want to add to their already overwhelming burden; we want to lighten it.

How to Say the Right Thing

A good friend introduced to me a theory about how to not say the wrong thing to someone in crisis. The article, which explains the “ring theory” of kvetching, changed the way I look at grief and comforting others.

Originally published in The Los Angeles Times by clinical psychologist Susan Silk and Barry Goldman, this simple technique works in all kinds of crises—medical, financial, death of a loved one, even romantic. 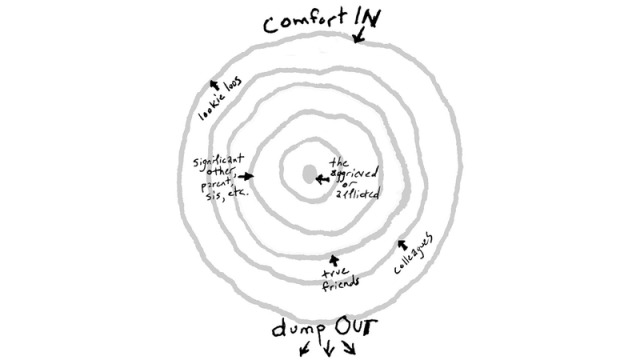 The ring theory of grief, explains Silk and Goldman, goes as follows:

"Draw a circle. This is the center ring. In it, put the name of the person at the center of the current trauma…. Now draw a larger circle around the first one. In that ring put the name of the person next closest to the trauma…. Repeat the process as many times as you need to. In each larger ring put the next closest people. Parents and children before more distant relatives. Intimate friends in smaller rings, less intimate friends in larger ones. When you are done you have a Kvetching Order….

Here are the rules. The person in the center ring can say anything she wants to anyone, anywhere. She can kvetch and complain and whine and moan and curse the heavens and say, 'Life is unfair' and 'Why me?' That's the one payoff for being in the center ring. Everyone else can say those things too, but only to people in larger rings."

When you are talking to someone in a ring smaller than your ring who is affected by the crisis more than you are, your goal is to help uplift that person. Positivity only. You are to simply comfort and support—no complaining or kvetching!

When you are talking to that person, listening is often more helpful than talking. If you do say something, first ask yourself if what you are about to say will offer comfort or support to the grieving person.

Silk and Goldman go on to explain that if you need to cry or scream or complain, that’s fine! That is a normal, human response. Just do it to someone in a bigger ring:

“Complaining to someone in a smaller ring than yours doesn't do either of you any good. On the other hand, being supportive to [the] principal caregiver may be the best thing you can do for the patient.”

Comfort IN, Dump OUT

With my dad’s cancer, my mom needed positivity. She was in a smaller ring than I was and, thus, didn't need to hear how terrified I was to lose my father. Her needs came first. A few weeks after starting treatment, the doctors did an MRI on my dad's brain for the first time. This new scan showed cancer spots on the brain now, too. My mom was understandably distraught. But because the original CT scan didn't include his brain, my response to her was “Who’s to say the spots weren’t already there? We just don't have the 'before' picture—they could be smaller and we wouldn’t even know it!” I will never forget the visible relief on her face in that moment and seeing my father, ever the optimist, standing behind her nodding at me, smiling. The ring theory was working—my mom was comforted with my positive, uplifting outlook.

► You'll also like: 6 Ways Our Culture Can Avoid Being 'Grief Illiterate'

On the other hand, my dad, the center of the ring and the self-titled “Cancer Boy," needed humor. He already had the positivity. What he needed was someone to keep it light-hearted with him. I could see the gratitude in his eyes when I would kid around with him about his cancer—he needed someone else to be able to joke about it because it meant that they knew, just like he did, that everything was going to be fine; he was going to defy the odds and beat this. He was the center ring, so even though it felt entirely too soon, we would crack jokes and laugh in cancer's face. When I was discouraged or needed to cry, I could go to my siblings because they were in the same ring as me. And so it goes. (Spoiler Alert: Almost six years later, my dad is doing great and is close to being completely cancer-free.)

In Mosiah 18:9, Alma describes the covenants we make at baptism, and what it means to be called His people—we are willing to bear each other's burdens, that they may be light, and we become more willing to "mourn with those that mourn . . . and comfort those that stand in need of comfort."

While there is never going to be one right thing to say, we can better minister to those around us by putting their need for support and comfort in front of our own grief. Everyone is different; we all cope in our own way. But when we listen to the Spirit and are sensitive to those who are more closely affected by the crisis, we can better serve them and help them make it through.

And we will appreciate it even more when we will, inevitably, get our own turn inside the center ring.