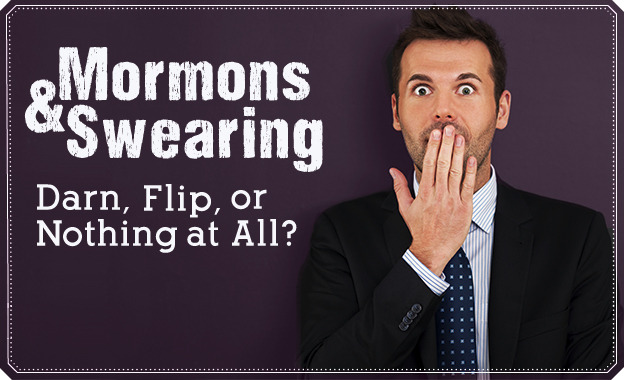 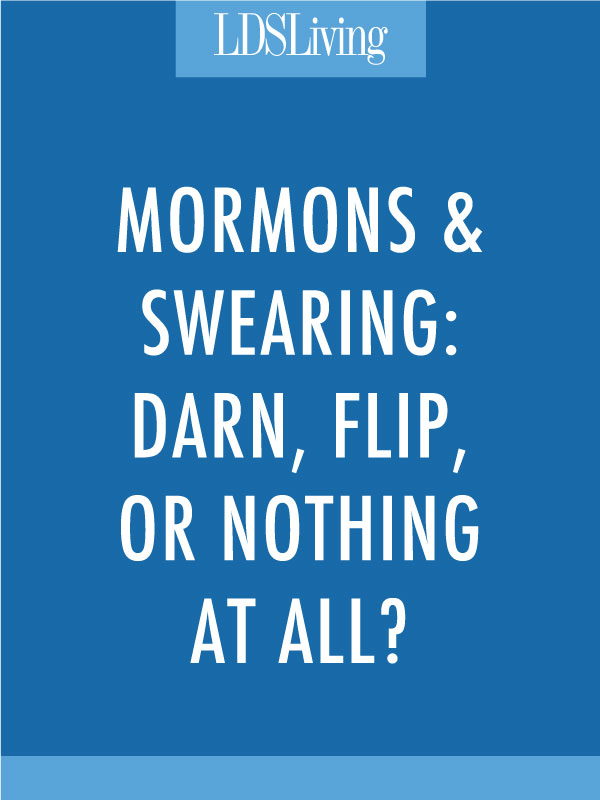 The Church's guidelines on language are outlined simply in the For the Strength of Youth pamphlet:

How you communicate should reflect who you are as a son or daughter of God. Clean and intelligent language is evidence of a bright and wholesome mind. Good language that uplifts, encourages, and compliments others invites the Spirit to be with you. Our words, like our deeds, should be filled with faith, hope, and charity.

In specific reference to cursing, the section continues,

Do not use profane, vulgar, or crude language or gestures, and do not tell jokes or stories about immoral actions. These are offensive to God and to others. Remember that these standards for your use of language apply to all forms of communication, including texting on a cell phone or communicating on the Internet.

But in the case of "Mormon swears," or the common "cleaner" substitutes for traditional curse words, members are left in a gray area to decide for themselves how they're going to speak. Here are just two opinions from active LDS members on the concept of Mormon "cursing."

The Science of "Swearing"
By Kelsey Berteaux

I promise I won't judge you for your take on this issue if you won't judge me on mine. Because I'll admit it. I say flip. I say darn. I say shoot, and heck, and probably a lot of other "Mormon curse words" without even realizing it. Are these substitutes, as so many people say, "just as bad as the real thing"? Absolutely not. Let me explain.

Did you know there's a physical difference between when a person says or hears a tabboo curse word versus a substitution? On a subconscious level, your body reacts differently between hearing a legitimate curse word versus a substitute for one. There is literally a difference in how your brain processes the two, and tabboo curse words are measurably more jarring than their counterparts.

So if your goal is to clean up your language, substitutions are a valid answer to the problem--they're not the same as curse words. They are "cleaner." And in my book, that makes using them a persuasive solution to the problem of filling in the language gaps that naturally arise when you're removing worse words from your vocabulary.

Now, I know what you're going to say, and to be clear, I'm not advocating speaking with a casual curse subsitution in every other sentence. I'm also not a huge fan of substitutions that sound eerily like the word they're subbing for--a misheard curse's reaction is the same as a real one, and I don't want to subject anyone to that subconcious reaction and feeling. But if I forget something important, hurt my wrist, or delete an important email, I feel I'm 100% alright to say, "Oh, dangit!"

A Life Without Expletives?
By Jannalee Sandau

I remember a friend I had in high school who, every time we heard some swear around us, would humorously quip, “could you mentally reconstruct that sentence, please?”

Though it was a bit of a joke between us, I stand behind that phrase. Thoughts become words, and both can be controlled and better used. I believe that our thoughts can be trained to construct sentences without worldly swear words or their Mormon substitutes.

I acknowledge that “Mormon curse words” are not as “profane, vulgar, or crude” as their worldly counterparts, and might be a good step towards replacing offensive language with less offensive language, but they are just that—a step, not an end result. The ideal end result is language filled with meaningful, uplifting words. Curse words, Mormon or otherwise, are unnecessary to communication and are usually used in times of high negative emotion. Somebody cuts you off on the freeway. You forgot to call someone you promised to. Your computer crashes right as you finish the project you’ve been working on for two weeks. Each of these situations are a catalyst for cursing. Yes, even “Mormon swears” are usually born of frustration, anger, or the desire to release a pent-up emotion. Perhaps instead of making our end goal to “clean up our language,” it would be better to make our end goal to be more patient or kind and not give into the “natural man.” As we focus on eliminating any type of swear word or substitute, our language will become more uplifting and we will be more aware of our patterns of anger or frustration and improve them.

- The wise in heart shall be called prudent: and the sweetness of the lips increaseth learning. (Proverbs 16: 21)

- The heart of the wise teacheth his mouth, and addeth learning to his lips. (Proverbs 16: 23)

- Even a fool, when he holdeth his peace, is counted wise: and he that shutteth his lips is esteemed a man of understanding. (Proverbs 17: 28)

It’s interesting that all of these scriptures tie emotion, wisdom, words, and self-control. These were all characteristics that the Savior displayed. Think of how many times He must have been frustrated with the short-sightedness of those around Him, with those who rejected Him or misinterpreted His words, who defiled His house, or took His Father’s name in vain. Christ was the master of self-control, and if we are to follow Him, we should be as well. And the best place to start is with our language.

What do you think about "clean cursing"? Take the poll below.