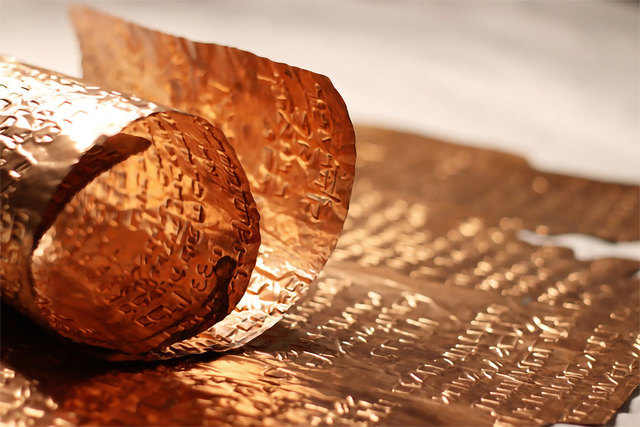 Is the Book of Mormon Like Other Ancient Records Written on Metal Plates?

“Whatsoever things we write upon anything save it be upon plates must perish and vanish away.”

One of the most distinctive aspects of the Book of Mormon is its physical form. Those who saw the ancient Nephite record described it as being engraved onto thin golden plates which were bound together with D-shaped rings.1 The book also mentions other metal records, such as the Brass Plates, the 24 gold plates which contained a Jaredite record, and the underlying Nephite records from which Mormon created his abridgment.2 Clearly, the Nephites had an extensive and enduring tradition of keeping records on metal plates.3 Explaining the reason for their manner of record keeping, the prophet Jacob declared, “whatsoever things which we write upon anything save it be upon plates must perish and vanish away” (Jacob 4:2).

According to H. Curtis Wright, a bibliographer with expertise in ancient epigraphy,4 “literally thousands of metal documents”—written on metals such as lead, bronze, copper, silver, and gold—have been discovered “all over the ancient world.”5 So, the medium upon which the Book of Mormon was written is well attested in antiquity. Yet some may wonder, more specifically, how closely the Book of Mormon and the various plates, which it mentions, resemble other metal documents from the ancient world.

William J. Hamblin, a scholar of ancient history, found that the genres of writing on metal in the “Mediterranean world at the time of Lehi” generally fit into the following categories: ritual, laws, prophecies, and histories.14 “These genres,” wrote Hamblin, “broadly match the described contents of the bronze [brass] plates in the Book of Mormon” (see 1 Nephi 5:11–13), which reflect “the Law (torah), the Prophets (nevi’im), and the Writings (ketuvim)” found in the Jewish tradition.15

Hamblin has also noted that metal documents from the regions of the Mediterranean have been written in various Semitic scripts (including Hebrew), as well as adapted forms of Egyptian.16 This gives a plausible ancient context for the Nephites’ perpetuation of Hebrew and what they called “reformed Egyptian” in their metal record keeping tradition (see Mormon 9:32–33). 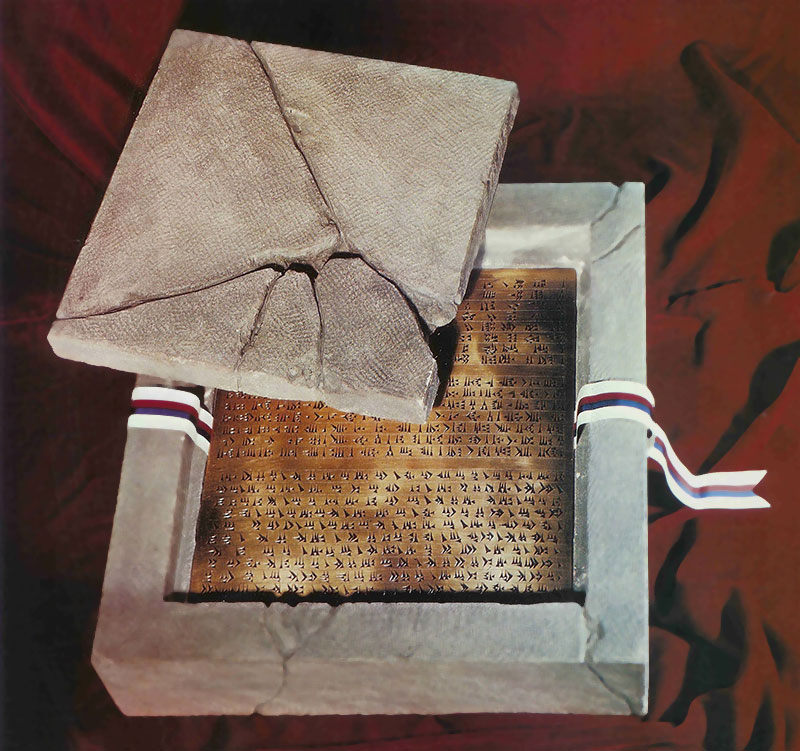 Apadana foundation plates of Darius the Great in a stone box from Tehran, Iran. Image via In the Cavity of a Rock.

When it comes to length, the Book of Mormon is rather unique. Its ancient engravings were translated into over 500 pages of English text. In contrast, the amount of text found on most other known metal documents is quite short, often requiring a few pages or less when translated into English.17

Lengthier ancient metal documents, however, are not completely unheard of. In South Korea, a prophetic record of wisdom teachings was found on a set of 19 gold plates that date to the 8th century AD.18 Even more notable, a gold document, which records “a significant portion of the Quran” was found in the tomb of a Chinese emperor. Its “120 gold gilded plates” were “hinged together” in “6 separate sets of 20 ‘pages.’”19

An eastern philosophical work called The Perfection of Wisdom Sutra is also said to have been written on gold plates. According to David B. Honey and Michael P. Lyon, the text’s “6,400,000 Chinese characters” occupy “three full Western-style volumes in its modern critical edition.”20 Assuming the report of its ancient existence is accurate, “copying it on gold plates must have necessitated an extraordinary amount of gold as well as a huge investment in human and monetary resources.”21

There is an ancient eyewitness report that a Greek poem from around the 8th century BC, called Works and Days, was recorded in a lead book.22 Wright described the poem as a “literary opus of some thirty Oxford pages.”23 An ancient Hittite account, called the Deeds of Suppiluliuma, dating to the 14th century BC, was likely written on bronze tablets.24 Although many sections of the document are poorly preserved, the remaining portions suggest it would have been quite long.

Even closer to Jerusalem, the famous Copper Scroll (part of the Dead Sea Scrolls) is a substantial Hebrew document that dates to the 1st or 2nd century AD. It was inscribed onto separate copper plates that were riveted together into two continuous scrolls.25 These and other examples demonstrate that lengthy metal documents, while rare, are certainly attested in the ancient world.26

Physical Space on the Plates 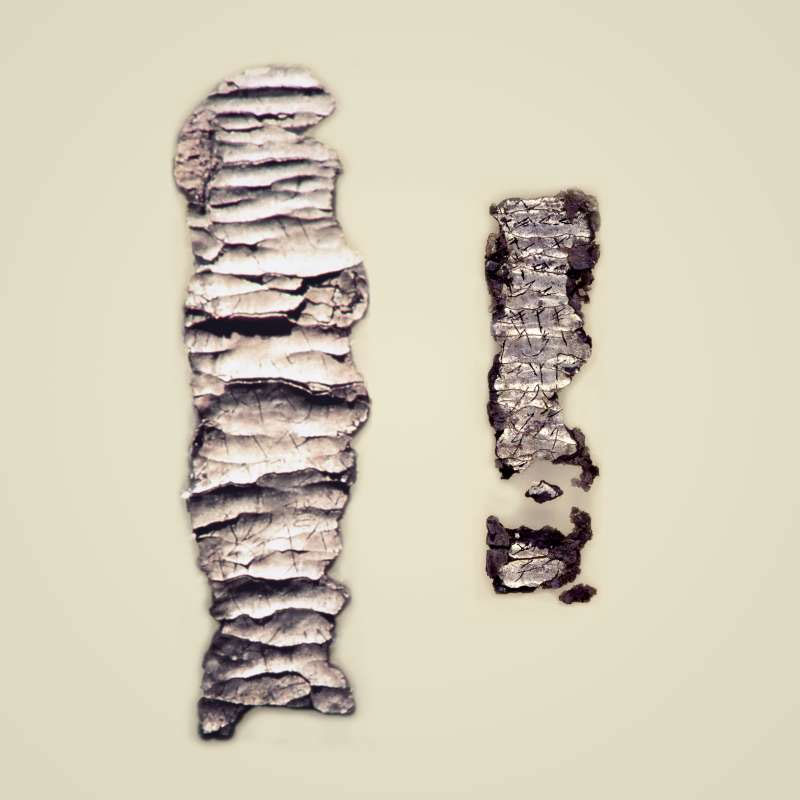 Silver scroll found at Ketef Hinnom containing a portion of Numbers 6, dating to the 6th or 7th century B.C. Image via the Israel Museum.

Finally, there is the question of physical space. Could over five hundred pages of English text really have been derived from the characters inscribed on the Book of Mormon’s gold plates? Once again, comparisons with other ancient documents and scripts provide valuable insights. Hamblin, for example, has compared the 24 plates of Ether with the Iguvine Tablets (3rd–1st centuries BC) discovered in Italy, which are made up of seven large plates, five of which have writing on both sides.27 After several calculations, Hamblin concluded “that it is quite reasonable for the twenty-four plates of Ether to have contained both the book of Ether and Genesis 1–10,” as the Book of Mormon indicates.28 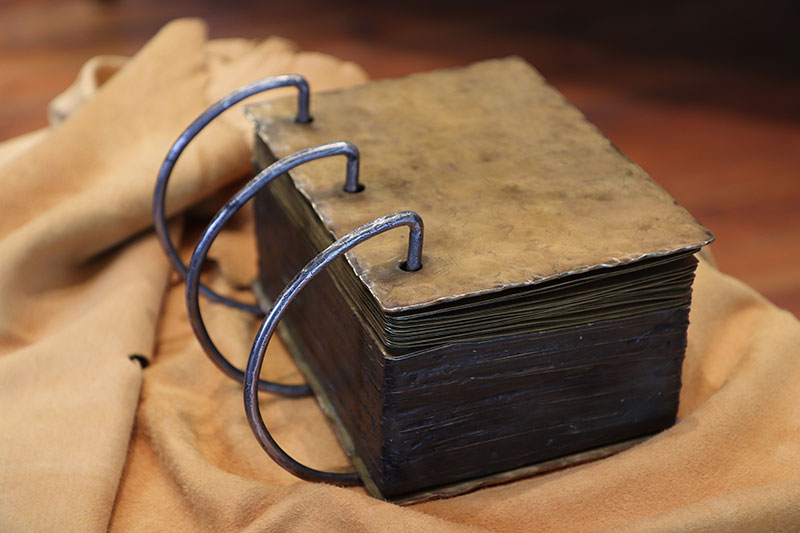 Replica of the gold plates constructed by David Baird. Photograph by Daniel Smith.

Ancient metal documents were known among scholars33 and probably even a good number of regular folks during Joseph Smith’s day.34 How much Joseph Smith or his associates knew about such discoveries before the Book of Mormon was published, however, is uncertain.

What is clear is that the Book of Mormon and its discussion of metal plates fit in remarkably well with other findings from the ancient world, including many metal documents from the Mediterranean and Near East. Even the book’s unusual length is not all that startling when compared to other rare, lengthy documents from antiquity.35

If the world today possessed the plates upon which the Book of Mormon was written, its material and historical worth, as far as worldly wealth is concerned, would be astounding. Yet, as the prophet Moroni declared, “the plates thereof are of no worth, because of the commandment of the Lord. For he truly saith that no one shall have them to get gain; but the record thereof is of great worth” (Mormon 8:14; emphasis added). While the Book of Mormon shares physical similarities with other ancient metal documents, its powerful testimony of Jesus Christ—the most important measure of its worth—is truly unparalleled.36

John A. Tvedtnes, The Book of Mormon and Other Hidden Books: Out of Darkness Unto Light(Provo, UT: FARMS, 2000).

Lead image a replica of the Copper Scroll. Photo via TimesofIsrael.com