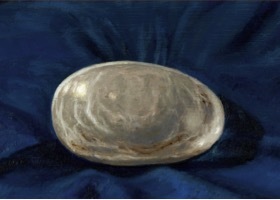 Joseph Smith Had a Second Seer Stone. Here's What We Know About It

Last year the Church released photos of Joseph Smith's brown seer stone. But did you know he also had a white seer stone that might have been even more important to him?

Palmyra resident Pomeroy Tucker, who worked on the publication of the Book of Mormon, remembered that Joseph Smith’s seer stone had a “whitish, glassy appearance, though opaque, resembling quartz” in his 1867 book. Other late sources claiming to have interviewed early Palmyrans reflected Tucker’s description of the stone, making it difficult to know if they were original observations or mimicking his more informed, publicly declared opinion. Nevertheless, they stated that Joseph Smith used a white stone.

Unlike his brown stone, Joseph Smith did not give his white stone away. In fact, the Nauvoo Apostles remember him showing them his seer stone, and they imply that he may have been using it in some way. Joseph showed Wilford Woodruff his white stone in 1841, years before Woodruff ever saw the brown stone (which was presumably in Oliver Cowdery’s possession until 1850). During that time, Joseph had been working on the Book of Abraham and preparing the Nauvoo Temple endowment. On 27 December 1841, Wilford Woodruff wrote that Joseph showed him his seer stone at a meeting with the Quorum of the Twelve Apostles. From the fall of 1841 to the summer of 1842, Wilford Woodruff called Joseph Smith “Joseph the seer” in his journal numerous times.

Joseph also showed the white stone to the Twelve Apostles when they met together, followed by a speech that described the white stone as his own personal stone. Brigham Young recorded, “I met with the Twelve at brother Joseph’s. He conversed with us in a familiar manner on a variety of subjects, and explained to us the Urim and Thummim, which he found with the plates, called in the Book of Mormon the Interpreters.”

Young also declared that Joseph “showed us his stone.” Joseph then explained “that every man who lived on the earth was entitled to a seer stone, and should have one, but they are kept from them in consequence of their wickedness, and most of those who do find one make an evil use of it.”

Was the white seer stone more important to Joseph Smith than his original brown seer stone?

There is also other evidence that the white stone was valued over the brown stone. In 1887, Wilford Woodruff succeeded John Taylor and was given possession of the seer stones (apparently the brown and the white). Soon after he became the new President of the Church, Woodruff carried one of the seer stones with him to Manti, Utah, where he consecrated it on the altar of the temple. That evening he revealed in his journal that before leaving the altar of the temple, he “Consecrated upon the Altar the seers Stone that Joseph Smith found by Revelation some 30 feet under the Earth Carried by him through life.” In other words, he consecrated the white stone on the altar, not the brown stone. The brown stone was presumably given to Cowdery, then to Phineas Young, and so on. The stone that Woodruff identified was “carried by [Joseph Smith] through life.” Woodruff had to make a conscious choice about which stone he took with him, and it is clear that he consecrated the white seer stone on the altar of the Manti Temple.

Did Joseph Smith translate the Book of Mormon with the white seer stone?

Given that many local Palmyra residents remember Joseph with a white stone, and taking into consideration the fact that he gave his brown seer stone away to Oliver Cowdery, is it also possible that Joseph translated the Book of Mormon with the white stone?

There are almost no contemporary accounts of the Book of Mormon translation that describe the color of Joseph Smith’s seer stones. The earliest accounts, though they may be few, do not mention Joseph Smith using a brown stone to translate. The earliest source, from the Wayne County Inquirer, reported soon after 6 April 1830 that Joseph Smith used a “white stone” to translate the Book of Mormon. The Pennsylvania newspaper printed the account during a time when Joseph was actively evangelizing from Palmyra to Harmony, Pennsylvania. Though it is unknown how the newspaper may have known the color of Joseph Smith’s steer stone, much later accounts made similar claims. By that time, Joseph would have given his brown stone to Cowdery.

On 4 November 1830, a few months later, Joseph Smith purportedly used a seer stone to give the newly baptized future Apostle Orson Pratt a revelation (see D&C 34). Though he may have given Oliver Cowdery his brown stone, he appeared to have possessed another stone that he was actually using. James Van Cleave heard Pratt explain the reception of the revelation. He wrote, “On arriving there Joseph produced a small stone called a seer stone, and putting it into a Hat soon commenced speaking and asked Elder Pratt to write as he would speak.” The leap from the newspaper source to Pratt’s account would indicate that Joseph Smith had a white stone that he kept in his possession after he gave his brown stone to Cowdery that may have been the stone he used to translate.

Most of those who emphasize that Joseph translated with a brown stone did not follow Brigham Young to Utah after Joseph Smith’s death. Emma suggested that Joseph Smith used a dark stone to translate after he stopped using the interpreters. Her letter is important to the translation of the Book of Mormon due to Emma’s status as a direct witness of the translation. She informed Emma Pilgrim that after Joseph used the “Urim and Thummim” for the lost book of Lehi, “he used a small stone, not exactly, black, but rather a dark color.” Martin Harris also witnessed the switch between the two devices, but he never mentioned the color. Emma did not participate as a scribe during the translation of the extant Book of Mormon: in fact, she only wrote for Joseph during the translation of the Book of Lehi and for a brief time in the fall of 1828. Therefore, she may not have felt the need to address the specific coloration of the seer stone that Joseph Smith used while translating with Oliver Cowdery. Additionally, she was at odds with the Church in Utah when she gave her accounts, which could have affected her perception. She knew that Joseph gave Oliver Cowdery his brown stone and presumably that the Church under Brigham Young possessed Joseph’s white stone. In opposition to the Church, she had a political motive to emphasize Joseph Smith’s use of the brown stone because it would lend credence to Mormons who had not followed Brigham Young to Utah. Emma was not alone: David Whitmer also emphasized the importance of the brown stone. 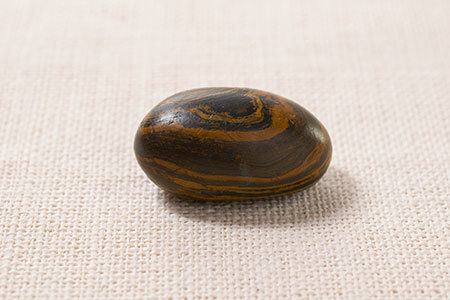 ► You'll also like: 7 People Who Had the Seer Stone in Their Possession + Extra Photos

Where is the white seer stone today?

It was during Snow’s presidency that someone finally left a full description of the seer stone he possessed. Richard M. Robinson remembered that Snow showed him the seer stone sometime around the turn of the twentieth century. Snow apparently told Robinson that “the Seer Stone” was the stone the “Prophet Joseph used.” Three decades after seeing the stone, Robinson wrote that the “seer stone was the shape of an egg, though not quite so large, of a gray cast something like granite but with white stripes running round it. It was transparent but had no holes, neither in the end or in the sides.”

This stone may have remained in the hands of the Presidency for decades, but it is clear that Church Historians like B. H. Roberts knew nothing about the white stone. Nonetheless, it is apparently in the possession of the First Presidency, along with the Presidency’s papers, today. Its exact provenance is not what is impressive about this stone but rather the fact that Wilford Woodruff consecrated it at the Manti temple and that he believed that it was Joseph Smith’s personal seer stone that he kept throughout his life. Future evidence drawn from the Presidency’s papers may illuminate the multiple lapses of our knowledge of this stone’s provenance, but the evidence we now possess assures us that it is important to the Restoration.

When the Church released photos of the brown seer stone that was owned and used by Joseph Smith, the news ignited a firestorm of curiosity and controversy. People wanted more information and wondered why they hadn't been aware of the stone's existence.