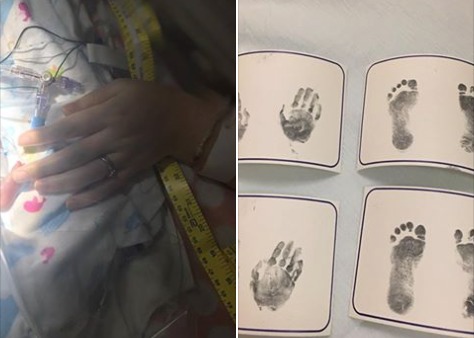 Clarissa and Jason Osborn are no strangers to heartbreak.

In 2013, Clarrisa was diagnosed with brain tumors and received months of radiation and treatment until doctors said she was tumor free. In 2016, the couple lost their second child, a daughter, after her heart stopped beating just a few months after she was born.

And recently, the family lost their four quadruplets, born at 23 weeks into Clarissa's pregnancy, weighing just over a pound at birth.

"Kylie did have brain bleeding and lung issues and did not make it through the night," the couple posted on their Facebook page on Tuesday. "Ellie, who was doing great yesterday took a turn for the worst and due to lung bleeding she did not make it this morning."

Despite the heartbreak of losing two daughters in less than 24 hours, the couple also shared their faith in Heavenly Father's plan for His children.

"We appreciate your love and prayers," the couple posted on Facebook. "Each baby has touched our lives in their short life. We know that there is a plan for all of God's children.

"Savannah and Lexi are hanging in there right now. We will keep you updated. Thank you for your continued prayers."

On Wednesday, the family posted on Facebook that their two other daughters, Savannah and Lexi, passed away.

"With heavy hearts we update you on our family," the Osborns posted. "Lexi and Savannah took their last breaths in our arms this morning. We have read your comments, texts, and felt your prayers.

"We firmly believe that our girls have moved on to be with their Heavenly Father and their sisters Shanna, Kylie, and Ellie. There is life after death and that gives us comfort."

During Clarissa's pregnancy, the couple was featured on the BYUtv show Random Acts, where friends and family along with the show's hosts helped gather gifts for a baby shower for Clarissa.

"Clarissa is one of the sweetest ladies I've ever met," family friend Monique Good says on the show. "She does the little things that you wouldn't think of that somebody needs help with and she does it quietly. She doesn't do anything for herself."