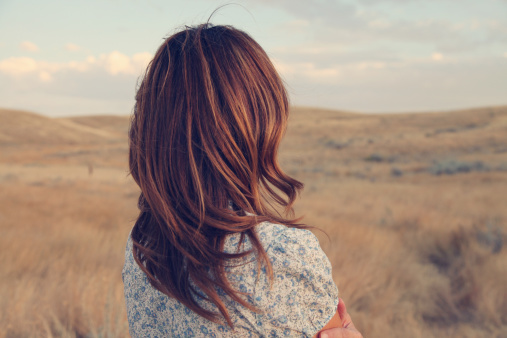 LDS Mother Shares Brave, Honest Insights "for Anyone Who Wants to Believe but Can't Connect" to the Spirit

In the Bible, there is a story of two disciples who were discouraged and grieved. Their leader and exemplar and friend Jesus Christ had died and they thought he was gone forever. They were walking to a town called Emmaus when a stranger came up to them and they conversed and walked together. The stranger asked what troubled them, and they told them all about the horrific death of their beloved Jesus. The stranger quoted scripture and told them to not worry, that Jesus Christ would rise again. That stranger was Jesus Christ, but as it says in Luke 24:16, "Their eyes were holden that they should not know him."

Here, these two downtrodden and sorrowful men were mourning the loss of Jesus the whole time they were walking and talking with the Savior himself, but their eyes were "holden" so they didn't recognize Him. I have had my own sort of road to Emmaus, one that lasted for three years where I felt alone, scared, blind, downtrodden, discouraged, and hopeless. You could say my eyes were holden.

It started with depression and moving to a new neighborhood. In the last three years, shortly after I moved, I began to battle the darkest and deepest depression I had ever known  Just when I thought I had it figured it out and thought it was “solved,” it came back again. That second round brought me to my knees in a kind of desperation and despair I have never experienced.

Feeling No Guidance from God

During this time, for those full three years, it was like my signal to the Spirit and Heavenly Father got lost. Depression changed the station and no matter what I did, all I got was static. And not just the Spirit but any kind of love or connection or guidance from God, something I had always had my whole life.  Throw in some questions and doubts and negative experiences in the Church and it was a recipe for pure darkness. I felt totally forsaken and alone. Mother Teresa went through similar feelings and, in a letter to her Archbishop, described it perfectly. She said, “Please pray specially for me that I may not spoil His work and that Our Lord may show Himself--for there is such terrible darkness within me, as if everything was dead. It has been like this more or less from the time I started ‘the work.' Ask our Lord to give me courage.”

Well, the Lord did give me courage, and after some time and the right interventions, I got on my feet again and started to feel good emotions once more, but still nothing spiritually. I decided to double down; maybe I just wasn’t doing it right. Maybe that quick prayer as I fell asleep and the less-than-ideal scripture reading wasn’t cutting it. As conference approached, I was so hopeful and just knew that I would finally get something. I prayed, pleaded, fasted, read, pondered, asked family members for support and prayers, and prepared as best as I could for conference.

It came and my heart broke. I could hear the words and in a distant way liked the words, but I couldn’t connect to the words or even get a feeling of comfort or a reassurance of God’s love. Instead, I kept hearing the theme that if I just read the Book of Mormon, if I just pray, if I just have the desire, He will open the door. I cried bitterly after the sessions and thought, “I am knocking! I am praying. I am asking. I am pleading. I am here! Where are you?”

That led me to conclude one of two very very uncomfortable truths. Either 1) He wasn’t there and my testimony of the gospel wasn’t true, which I couldn’t deny because of past experiences, so that led me to conclusion number 2) that something was wrong with me. I was the problem. I was broken. I was unworthy somehow.

As you can imagine that was not a healthy mindset to have and again sent me into a spiral of self-loathing, shame, and ultimately depression.

In the midst of this spiral, something happened.  My visiting teaching partner asked in late October if I would like to take part in a challenge to read the Book of Mormon daily and maybe share what I learned when she taught a stake scripture class. I took the challenge but thought, “Uh, I’ve tried this before and I’ve gotten nothing so, I doubt I’ll be able to say anything when the time comes.” But I still agreed. Remarkably, a day later, my brother who had been a support and confidante reached out and asked if I would like to read the Book of Mormon with him. He outlined a plan where we each read however much we wanted but we would commit to read every day and email each other with something that stood out or that we learned.

Even at the time, I knew that the timing of two challenges coming my was was not coincidental. So I dove in. I got rid of the perfectionist ideal where I thought I had to wake up at 5 a.m., read for at least a half hour, color code, write in a journal, cross reference, and take a class on Isaiah. I made it work for the flawed and inconsistent me and made it as convenient and simple as I could. I read on my phone at all kinds of times and settings and it wasn’t always the most profound or spiritual, but it was me reading every single day and really searching for gems. And I found them and it helped,  but two months in I didn’t feel anything different. My days weren’t going better. I wasn’t more patient with my kids. In fact, quite the opposite. I wasn’t inspired or filled with peace. I wasn’t feeling the Spirit or a connection to God. I still struggled with depression and I still felt forsaken. I was feeling very, very discouraged and had lost hope and was going through it mechanically just to follow through. To quote from Nephi and Lehi’s dream, I was “pressing forward through the mist of darkness, clinging to the rod of iron.” But I hadn’t yet partaken of the beautiful, joyful fruit.

Then, just around Christmas time, something happened. My heart started softening. I noticed that every once in a while I would look over at my kids and husband and see them in a new light. It was brief, but I would be filled with a beauty and gratitude that took my breath away. My prayers started to be answered—not the big stuff, but the little flashes of inspiration of being led and reading just the right article to help fix a relationship I had been worried about, an idea to read a book that has miraculously helped me with my depression, a prompting and challenge from a family member to read my patriarchal blessing which had just what I needed to hear, and on Christmas Eve, two beautiful, personalized gifts were given to me that made me feel loved, noticed, and valued not just by the givers but by God. I somehow saw through spiritual eyes that God was behind it and was watching out for me and sending people and love my way.

Just as Mother Teresa’s archbishop wisely counseled, I started to feel what he describes in his response to her. “God guides you, dear Mother; you are not so much in the dark as you think. The path to be followed may not always be clear at once. Pray for light; do not decide too quickly; listen to what others have to say; consider their reasons. You will always find something to help you. . . . Guided by faith, by prayer, and by reason with a right intention, you have enough.”

I did have enough and the mists of darkness began to dissipate. I began to see the hand of the Lord and tender mercy moments. My faith began to grow and, more importantly, my hope was restored.

Since then that faith and hope have grown stronger each day. I can’t explain all the hundreds of little offshoots that have and continue to happen because of reading the Book of Mormon. It fills me with the Spirit, opens my eyes, helps me listen to the Spirit, follow its whisperings, and be blessed tenfold by the outcome. I don’t know why I was in that dark place for so long and what was different about this time. I think I tried harder and longer than I ever had, and I also think that the timing was right. I think I had struggled long enough and learned what I needed to, and the Lord slowly began to reveal Himself to me—not because He had forsaken me, but because, for some reason, my eyes were "holden." But I do know that that trial wasn’t because of worthiness or that  He didn’t love or care about me  I know it was for a purpose, even if I don’t know why yet. And I most definitely know that what has brought me to this state of happiness, inspiration, and confidence of my worth and divine heritage is a direct consequence of reading the Book of Mormon. I know it is true; I know it has power to guide us, inspire us, teach us, and change our lives by strengthening our connection to God and His Spirit.

So for anyone who wants to believe but can't quite connect, for anyone who feels forsaken, alone, lost and heartbroken, who reaches out to God and feels like no one is reaching back, you are on your personal road to Emmaus, and there is a purpose in this. He is with you, but for whatever reason, you just can't see Him there right beside you. Keep walking, keep working through it, and whether it be after 1 mile or 100, at some point your eyes will be opened and you'll see that He was with you every step of the way.

"Don't you quit. You keep walking. You keep trying. There is help and happiness ahead. Some blessings come soon, some come late, and some don’t come until heaven; but for those who embrace the gospel of Jesus Christ, they come. It will be all right in the end. Trust God and believe in good things to come.” —Elder Jeffrey R. Holland

Eliza is a constant work in progress who writes to grow and understand. She is a mediocre housewife and hopefully better mother of four who is currently finishing her Bachelor's degree in sociology which satisfies her deep and unnatural need to analyze people and relationships. When studying and talking aren't enough, she writes her observations and findings from the "field" on her blog elizaismyname.blogspot.com.