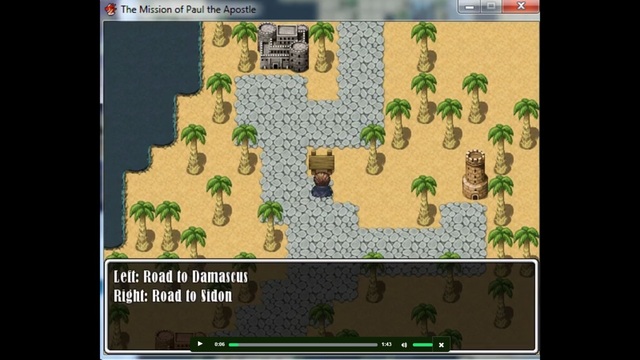 It's not unusual to find a video game inspired by a science-fiction or fantasy novel, but finding a Bible video game created by 14-year-old? That is unusual.

Levi Hilton, a young Latter-day Saint, did not really care for video games before he began making his own.

"I know a lot of people who do [play video games]; it's pretty brutal stuff," Hilton said. "And so, kind of like in general conference how they talk about being member missionaries, I thought it would be cool if they had better stuff to play."

The teen from Orem, Utah, began creating video games more than a year ago. Within six months of learning video game coding, Hilton completed Book of Mormon Heroes: The Servant of Kishkumen. About four months later, Hilton released a sequel, The Servant of Teancum.

Hoping to broaden his Christian audience, Hilton decided to base his next game off of Paul from the New Testament.

"My mom really likes Paul, so on Sundays sometimes we would talk about his missions and stuff," he said. "I thought it was pretty cool, especially because he started out pretty wicked but he changed through his repentance, a lot."

As with Hilton's other video games, the clothing, the money, the events, and the places in his Bible video game The Mission of Paul will be like those described in the New Testament. This is due to his intense study of Paul's story in the book of Acts.

But unlike his other video games, he said he hopes to raise enough money on KickStarter to make this game available not only for computers like Macs and PCs but also for Androids and iPhones.

Overall, Hilton estimates it will take him 150 hours, or partway through the summer, to complete The Mission of Paul.

This game also won't be Hilton's last. Once he has completed The Mission of Paul, Hilton will continue his Bible-themed video games by delving into the Old Testament with games about Daniel and Moses.

Hilton's Book of Mormon video games are available on Amazon and The Redheaded Hostess.