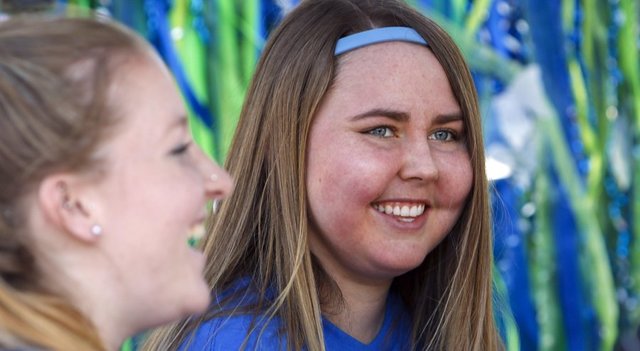 Julia Larsen, an LDS teen from San Marcos, California, was diagnosed with brain cancer last November. A 17-year-old senior in high school, Larsen could have gone to amusement parks, met celebrities, or traveled across the world when the Make-A-Wish foundation gave her one wish, but she chose instead to spend that wish bringing fun and imagination into the lives of impoverished children.

Make-A-Wish is a non-profit organization that makes the dreams of children with life-threatening medical conditions come true. Of the over 3,700 wishes they've granted in 33 years, fewer than 10 children and teens have given their wish to help others, according to The San Diego Union-Tribune.

"I figured I already have so much, I would give someone else the chance to be just as happy," Julia told CBS 8.

Last summer, Larsen visited the Dominican Republic to help build a medical clinic, and since that time, she's been inspired to reach out to those in need. Because her medical condition wouldn't allow her to go on a humanitarian trip, Larsen decided to put her wish towards a project for Habitat for Humanity, which helps impoverished families get into a home of their own.

On Friday, June 24, a group of about 100 of Larsen's friends and family gathered together at the Church of Jesus Christ of Latter-day Saints to build a frame home that could be used as part of a 26-home community for veterans as well as playhouses to bring happiness and excitement to impoverished children.

“It’s really cool to see how many people have come out today to give back," Larsen told The San Diego Union-Tribune.

After doctors discovered her brain tumor on November 4, 2015, Larsen endured surgery, radiation, and chemotherapy to help battle the cancer. But the tumor grew back by March. Now Larsen is on an experimental therapy that seems to be keeping the tumor at bay, though her condition does limit her activity and ability to travel.

Despite these limitations, Larsen was happy to help where she could during the project as she made the dreams of other's come true.