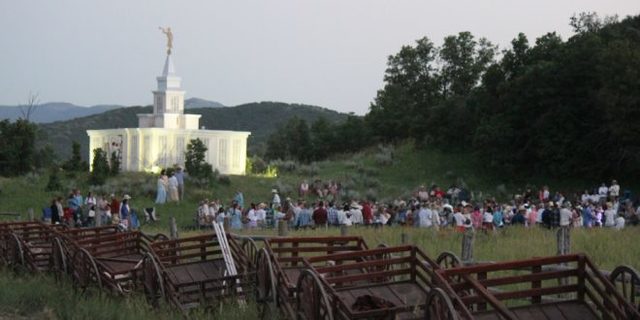 At 25 feet by 25 feet wide and 30 feet high, this replica of the Payson Utah Temple was built in one day by the combined efforts of dozens of LDS youth.

According toLDS Daily, the temple was designed by a professional architect, Bruce Fallon, then given to professional builder Blake Barrett to convert into packages that could be assembled and put together. Every trek family was given a kit they carried in their handcarts and assembled, each creating a different part of the temple that was later fitted together to create the beautiful replica.

Made of spray-painted muslin, foam, and wood, the temple was assembled by the Spanish Fork youth group in Diamond Fork Canyon. Shortly after the temple's completion, a mock mob came riding into the canyon on horseback, threatening to destroy the temple.

Once the threat had passed, the youth were able to enter the temple. Each carried a picture of someone in their life who had inspired them to go to the temple or who they hoped to see in the temple someday. The youth were able to share their pictures as well as their testimonies with one another, but the Stake Young Men’s President, Shane Lawrence, stressed that no prayers were said in the temple and nothing was done "to detract from the sacredness of our temples today," he told LDS Daily. 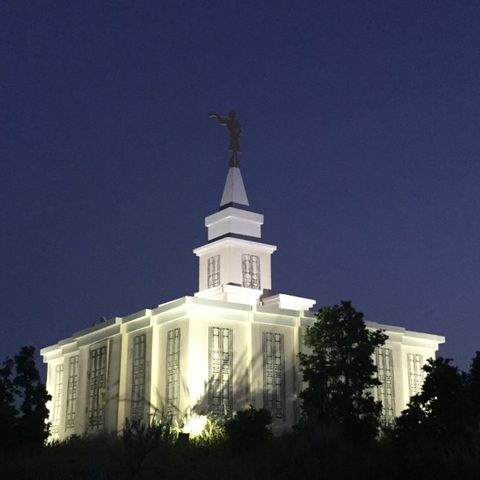 Lawrence continues about the experience on LDS Daily, "“When they arrived at the material location, a bishop was there to teach a lesson on sacrifice and what it took to build temples and what it might take for them to ‘get to the temple one day.’ It was another great spiritual experience. The kits were built by the youth and put together in one day. I believe that was a miracle. Seeing how well it turned out.”

Later that night, the temple was lit up at dusk, standing as a beacon and a symbol to the youth of the sacrifice of their ancestors as well as the place where they can grow closer to them by performing their temple work.

For more on this story, visit LDS Daily.