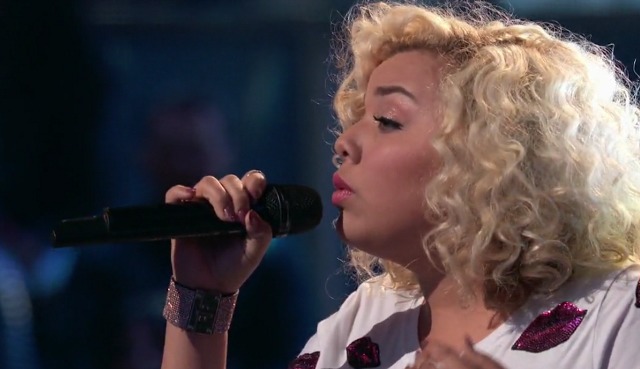 Incredible performances by both Aaliyah Rose and Brennley Brown made a tough decision even more difficult for Gwen Stefani in last night's episode of The Voice. But even though Stefani ultimately chose Brown to move on in Team Gwen, Blake Shelton stole Rose to be on his team and to also move on to the live performance round.

“Aaliyah came out here—and you just don’t sound like anybody else in the world. You have the slowest vibrato I have ever heard in my life,” Shelton said after Rose's performance.

Rose will be the second Mormon to advance to the final stage of The Voice after LDs 15-year-old Hanna Eyre blew the judges away with a performance that caused Adam Levine to call her "miraculous."

Following the two performances, Stefani shared how hard it was for her to make the choice between Rose and Brown. After choosing Brown, it seemed it might have been all over for Rose. Just as she welled up with emotion and thanked Stefani for the opportunity to work together, Shelton pushed his button to steal Rose and keep her on the show.

"I stole Aaliyah because she’s got this incredible presence. She’s got this old voice—to be only 14 years old, it’s just fascinating to me," Shelton said.

YES YES YES @blakeshelton!! I get to keep Brennley & see Aaliyah make it to the Live Shows! What a Dream! ❤️ #VoiceKnockouts — Gwen Stefani (@gwenstefani) April 5, 2017

It was definitely agreed among the coaches that Rose has a beautiful and very unique voice.

"Aaliyah has a really modern sounding voice, like, I think she sounds a lot like how Rihanna sounds," Stefani said.

For this knockout round, Rose performed an amazing rendition of "Like I’m Gonna Lose You" by Meghan Trainor. Rose has been close with Trainor and shared her admiration for her music.

"She is such an inspiration because she loves herself and she doesn’t care what anybody else thinks," Rose said.

Rose's competitor Brennley Brown shared how she could feel Rose's desire when she heard her practice the song.

"Watching Aaliyah rehearse—she put so much passion into what she sang," Brown said.

AM I DREAMING? Thank you @gwenstefani for believing in me & Thank You @blakeshelton for making my dreams a reality! #TeamBlake#LivePlayoffshttps://t.co/JgIN3zFlx2 — Aaliyah Rose (@TheAaliyahRose) April 5, 2017

After all was said and done, Rose couldn't keep her excitement in. She was not only moving on to the live performance round, but she also will get to work with coach Blake Shelton.

“Gwen was such an amazing coach and I’m just looking forward to working with Blake,” Rose said after being stolen by Shelton.

Just then, Shelton walked up behind Rose and, overhearing what she said, he exclaimed, "Oh you are?!"

Rose, surprised by Shelton, answered, "Yes!" and they hugged each other in excitement.

Lead image a screenshot from video above