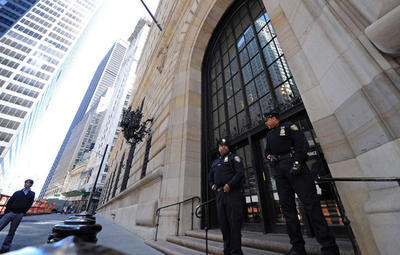 MR says: Not only are Mormons good at business and some of happiest people around, it turns out we're pretty good at security too.

From Fort Knox to the LDS Church's vaults in Little Cottonwood Canyon to the underground nuclear shelter at The Greenbrier, take a look at eight sites throughout the world that are or were heavily guarded.

Every compartment in the vault is secured by a padlock, two combination locks and a seal by the auditor.

Two New York Fed gold vault staff members and one internal audit staff member need to be in attendance when gold is moved or a vault compartment is opened.

A 90-ton, 9-foot-tall cylinder made from steel is at the vault's only entrance. It sits inside a frame made from steel and concrete that can create a seal that is air- and watertight.

Once this is closed, four rods made of steel are placed inside holes in the cylinder and timers are set, keeping the vault locked until the next business day.

This is just the beginning of the vault's security measures. For more information, visit the Federal Reserve Bank of New York's website.