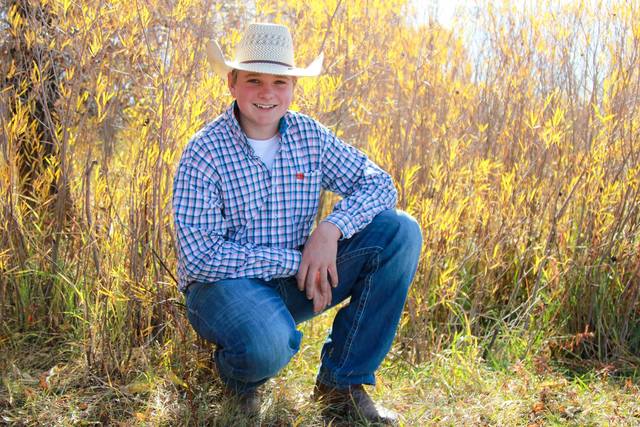 January 10, 2019—the day Kyle learned a terminal cancer diagnosis meant his missionary service would be taking a different form.

What began as a routine doctor's appointment for Kyle revealed that the cancer they thought had been eradicated two years earlier had returned—and was now terminal.

“There were no symptoms, no puking, no headaches, no balance issues. He was gaining weight; he looked as healthy as he’s looked in years. And it was supposed to be just a routine check before he goes on his mission, and that’s when they found it in the MRI,” explains Kyle’s father, Kirk Dory.

“It” was medulloblastoma spreading from Kyle’s brain down into his spine. Understandably, there wasn’t much conversation on the three-hour drive home from the hospital that day. But the topic of Kyle’s mission rose to the surface.

“I was talking to my dad [on the drive home] and I said, ‘I just wish I could go to New York.’  I was ready. I was getting excited, but with the cancer I didn’t think it was possible,” says Kyle.

While it was true that a traditional mission was no longer possible, Kirk, eager to help his son, sought out other options. He suggested they explore the idea of flying Kyle to Rochester, New York, so he could at least see where he’d been called to serve. To Kirk’s surprise, however, the next day he received an email from a concerned mission president asking why Kyle’s name had been removed from his list of incoming missionaries. After explaining Kyle’s situation and their desire to come visit New York, the president’s enthusiastic response was, “I could do better than that.”

The result was Kyle serving an eight-day mission in a trio companionship with the mission president’s assistants. 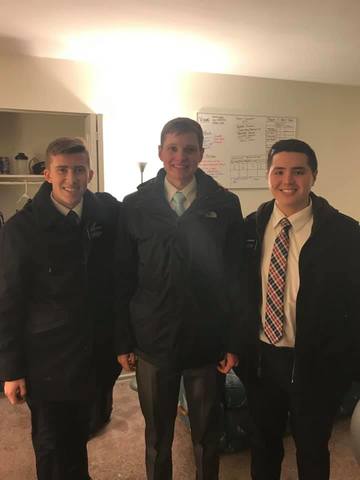 Kyle’s plans for after graduation didn’t originally include a mission immediately after high school. He had planned to go to college for a year, but the Spirit prompted him otherwise.

“I was sitting in Sunday School and there was a brother speaking and he said he thought he served his mission to teach lessons, but he actually served a mission to go love the people,” says Kyle. “When he said that, I went home and grabbed my patriarchal blessing and every paragraph said that I should serve a mission and that it would bless me and bless others.” 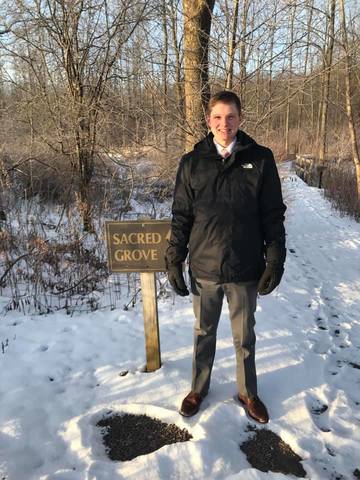 Kyle’s patriarchal blessing would continue to prove a guiding force when the return of his cancer meant an abrupt change of plans.

The familiar phrase “peace in Christ” sounds almost new when someone in Kyle’s position testifies of it. On the day he found out his cancer had returned, Kyle heard the youth theme song “Peace in Christ” for the first time and shared it with his family members. That song and its message have since become a theme for the Dory family, especially after a touching experience they had at the Indianapolis Indiana Temple.

After driving past the Indianapolis Indiana Temple during a school trip, Kyle decided that was the temple he wanted to one day be married in. When the return of his cancer meant that likely wouldn’t happen, the family rented a large van and drove out to Indiana. Kirk describes what happened as their van approached the temple:

“We had a Pandora station playing, and about three minutes before getting to the temple, the 'Peace in Christ' song came on the radio. It was like I had queued it up and played it; I mean it finished playing right as we got out of the van at the temple. It was a very tender mercy that God is in the details of our lives.” 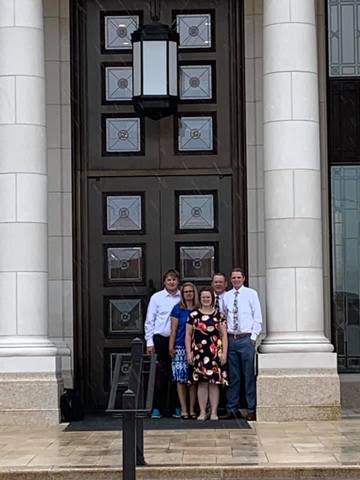 The Dory Family at the Indiana Indianapolis Temple where they performed proxy sealings as a family.

Of that experience, Kyle says, “I just have such a strong testimony of the sealing power that’s on the earth today. I know that if I do end up passing away that I’ll be with my parents again and we’ll be together forever.”

“Peace in Christ” isn’t the only song shaping the way Kyle lives the rest of his life. He is determined to live out all of the bucket-list items in Tim McGraw’s song, “Live Like You Were Dying.” So far, Kyle has ridden a bull in his town’s rodeo, which he managed to stay on for 2.7 seconds—the exact time sung about in the song.

He also plans to climb Medicine Bow Peak later this year, which will check off the line, "I went Rocky Mountain climbing." Most recently he went sky diving with one of the missionaries he served with in New York, a few family members, and his best friend.

“He’s just sucking the life out of his life right now, not worrying about what could have been or what he’d hoped it’d be, but dealing with what it is,” says Kirk.

Another line from McGraw’s song that Kyle has truly learned to live is, “I loved deeper and I spoke sweeter.” Since returning home from New York, Kyle has been sharing the Savior’s love and sweet message of peace by speaking to missionary zones, youth camps, and at his stake conference. Kyle first gained his testimony when a priesthood blessing brought peace soon after his first cancer diagnosis. Kyle says that testimony has only been “solidified” through his deepening challenges. And that faith isn’t affecting just Kyle.

“On one occasion the members of our stake gathered outside the Dory home and sang to them the song 'Peace in Christ,' just prior to him leaving for his week of missionary service. If you asked them, however, it has been all of us that have found peace in Christ as we have observed Kyle and his family's faith and courage in this trial,” says Kory Allen, Kyle’s stake president and good friend.

Faith and courage seem to be abundant in the Dory family, but how? How do parents facing the unthinkable still testify of peace and hope? Kirk explains that sometimes he gets angry with cancer and has to go “chop wood to lift the steam off.” But in a Facebook post, he explains how he manages his emotions:

“One of the things I learned about on this roller coaster ride called cancer is to just hold on tight. It is like riding a roller coaster blindfolded. You can’t see what lays ahead, how many twists, turns, or loopty-loos are before you. So you just hang on, trust God, and try to roll with it.

"One of the challenges of life is to drink from the bitter cup without becoming bitter. Feelings of anger, bitterness, doubt, and sadness are part of feelings that naturally come at times like this. It’s part of the deal. I can’t control those feelings coming, but through the enabling and atoning power of Jesus Christ, I can choose to not let them take up residency in my heart and mind.”

Kirk’s fine-tuned focus on Jesus Christ is enabling him to find the positive in a situation many might label as solely negative.

That perspective has led Kirk and his family to a unique understanding of what it means to have peace in Christ.

“We think we’re going to find peace when things are removed, when hardships are gone, and certainly that would be amazing, but peace in Christ can be during all of those things. And that’s what this whole thing has come to mean to me,” says Kirk. “Peace in Christ runs through our hardships, runs through our trials. It softens the blow; it makes it bearable so that there is no question that it’s going to be okay. It just will. And it’s absolutely amazing. That’s one of the miracles cancer has given us in my mind. It has allowed us to develop faith.”

And while Kyle may not be living in the city printed on his mission call, he is still fulfilling his call to testify of his faith in Jesus Christ. He says, “As of January 2019, before I was diagnosed, I was supposed to go on a two-year mission in New York. But now with my cancer, I was given two years of life, so I feel like this is my mission right now: to inspire people not in the mission field but at home. I feel like I’m on my mission right now.”

*Update: During a doctor's appointment in August 2019, Kyle Dory's doctor proclaimed the unthinkable—Kyle's MRI scan was clear of cancer. Learn more about Kyle's faith and this miraculous news here.