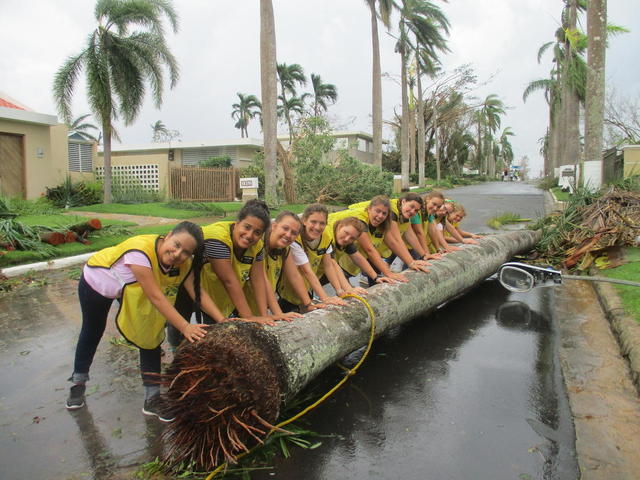 Three dozen missionaries are now back in Puerto Rico, with more to arrive from the MTC soon. They continue to serve and help after the devastation of Hurricane Maria and are having great success in sharing the gospel of Jesus Christ.

In the hours before Maria’s arrival, 55 sister missionaries squeezed into the mission home. Ninety-nine elders took cover in the mission office, a converted Mormon meetinghouse that included a gym and a stage.

They hunkered down and waited out the massive hurricane “that sounded like a train whistle,” said one missionary. Each relied upon food and other provisions they had packed inside their 72-hour emergency kits.

Once Maria had passed, the missionaries were anxious to pull on their yellow Mormon Helping Hands vests and help with the initial humanitarian response effort.

“For eight days, they did some great missionary work,” said President Smart.

But within days it became evident that Puerto Rico’s recovery would be a long-term, difficult process. Most of the island’s basic infrastructure was destroyed. Power was out and drinking water and other necessities were quickly becoming scarce.

Church leaders decided to evacuate the missionaries from Puerto Rico. Most were to be temporarily reassigned to other missions. A few who were weeks away from completing their missions were released and sent home.