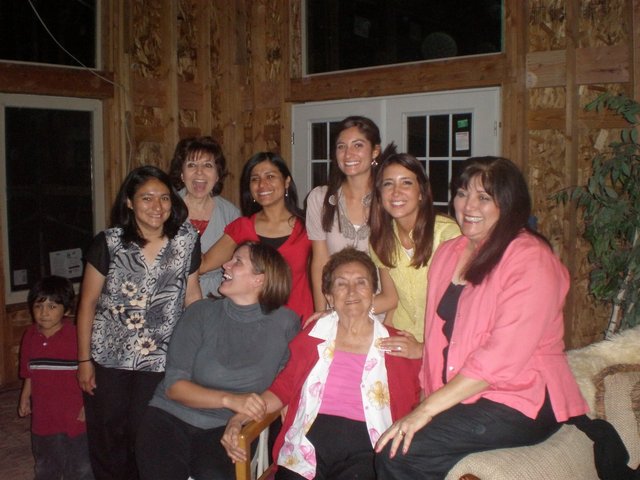 My Story as an LDS Latina

I am LDS. I am also Latina. I am proud of both these “features” of mine, and I think they work very well together.

I am also proud to say that over five million of the church’s 15 million members speak Spanish and that the number of Spanish-speaking LDS congregations nationwide have grown at impressive rates in the past decade. These Saints represent so many different heritages and cultures which enrich the Church and strengthen everyone around them.

Still, gaps exist. There are two types of people in the world—those whom we love and those whom we do not understand. How can you love someone you don’t understand? It can be very difficult. I hope my words can help to promote a better understanding of our Hispanic brothers and sisters.

It wouldn’t be fair to group these Hispanic Saints into one area, since they come from so many different countries, but I am going to go over some unique traits and traditions that seem to ring true about Hispanic members no matter if you are in Paraguay, Panama, or any lands around and in between.

The first time I realized I was truly a Latin-American Latter-day Saint was when the Relief Society president in our ward asked my mom to bring Jell-O to the Thanksgiving ward party. I was about 10 years old. My mom said, “Jell-O? Qué es este Jell-O? What a horrible dessert. I’ll just bring some graham crackers instead.”

But when my mom brought graham crackers to the party, the Relief Society president looked exasperated. She said to my mom, “But Jell-O was going to be the side for the turkey.” My mom gave her a blank look. I, of course like any 10-year-old, was very embarrassed.

Now, looking back at it, I understand. Hispanic people, especially outside of the United States, don’t generally celebrate Thanksgiving in the same way as descendants of pilgrims. My mom grew up in Mexico and her family had never had a Thanksgiving in their lives; even in my home growing up, it was just another day, maybe with a nicer meal, but that was it. It was a definite American tradition. If it had truly been a festivity, we thought, it would have been celebrated with tamales and horchata, no? My mom was simply puzzled at this.

I can’t tell you how many times we have arrived at Church events and been confused at what is going on. What can be learned here? We don’t always celebrate like everyone else does, and we don’t have the same holidays as Americans, and that’s okay. But we do love to have a good party.

Ever since I was a child I was always a little perplexed and confused about all this talk of pioneers. My parents were converts, and for years we heard (and appreciated) the pioneer stories but had no way of relating to it—or so I thought until I went to Salt Lake City’s 2010 Pioneer Day parade.

We were standing there for a long time waving at one float after the other as they passed by. I thought it was all very nice; a lot of bonnets and covered wagons. Then my husband said something that took me by surprise: “I love this parade and watching my people pass by. It gets me all misty-eyed to think about the pioneers and all they did. I love that I came from them.”

For a moment, I didn’t understand why that would make him feel emotional. Then, I understood. Mormons are his Raza, or race. Say the words La Raza and I understand. Anytime I hear mention of La Raza or if I hear of some Hispanic individual excelling in his or her community, or if I see a Hispanic parade on TV, I swell with pride and, yes, get a little misty-eyed. They don’t even have to come from Mexico. They can be from Peru, and I am still happy to identify in some way with them.

I love my people and my race and I realized, as he was talking, that his pioneer ancestors are his Raza - His Mormon Raza. That is something I respect and which I will forever respect from now on. To all those of you of good Mormon pioneer stock, I say, Órale!

So you are from Manasseh, right?

I don’t know of many other things that drive LDS Latinos crazier than when a well-meaning person confuses their identity by saying things such as “You are surely from the tribe of Manasseh since you are Mexican, right?” Here are some responses I have heard to this question:

“Just because I am Hispanic doesn’t mean I am from the tribe of Manasseh. And by the way, I am from Colombia, not Mexico.”

This statement is usually followed by something like “And I have never had a taco in my life either. They don’t make those in Colombia.”

Hispanic people are fiercely proud of their heritage and culture, but they are also pigeonholed quite a few times after they leave their country. They like to be seen for who they are and where they come from, without any assumptions made. The best thing to do is start by asking them where they are from and probably not by asking them what tribe they are from at all. It really doesn’t make a difference unless you are a religious studies professor doing research on tribal patterns.

This is probably my favorite area to cover. The differences are seen from the moment you walk into the meetinghouse, mostly because you will usually be greeted by the sound of people singing—loudly and often off key. I love walking into a Hispanic meetinghouse right when sacrament meeting begins. I love to hear their voices loud and strong and never ashamed. If someone told them they sang off key and that they were a little too loud, I know they would just shrug and say “That’s fine. I praise the Lord with my singing.”

Another way you can know you are in a Hispanic ward is by the Mexican handshake, or un abrazo and un beso (a hug and an air kiss). I love how the people greet in this manner. I think it encapsulates who they are. They live to love and extend a hand to one another.

Another element of Latino church which I love is their pure and great faith and their personal relationship with the Savior. Often when they are told of Joseph Smith’s first vision, they don’t bat an eye. They might say, “Oh yes, a very similar thing happened to my cousin Pepe a few years ago,” and they accept it. There is beauty in this simple faith, and it is a gift rarely seen outside Latin America, where people seem much more skeptical of such visions.

This leads me to an important point. Missionaries often talk about the faith of Latin Americans—these people may not always be from the tribe of Manasseh, but they were given promises by the Lord in ancient times and in Joseph Smith’s times. Not only are Hispanic people at least partly descended from Lamanites, but they are most definitely of the house of Israel. We are children of promise. What an honor it is to be one of this people!

Lost in the Melting Pot

Today we witness big debates on who is really right or wrong about immigration. What actually worries me more than the final result of immigration is LDS Latinos losing their rich heritage.

Sadly, I don’t always feel Hispanic. Sometimes, in this melting pot of a nation, I feel anything but Hispanic. I feel that I’m losing my heritage. Am I trying to fit in, or am I just assimilating too much? Is this a good thing, or bad thing? A couple of times I have reached out to shake the hand of a Hispanic person when I realized they were going to give me un abrazo and un beso. I think I may be forgetting at times what it means to be Hispanic.

How does anyone of any heritage keep their culture in this day and age? That is my question to you today, even and especially if you are not Hispanic. What do you see of value in the Hispanic culture? What do you like about LDS Latinos? And for those of you who are Hispanic and reading this—how do you keep La Raza inside of your heart and continue the great faith of your ancestors? I have some ideas but I need your input too. Leave a comment below and let me know.

I want to affirm that no matter where you go in the United States or in Spanish speaking countries, you can see that Latin American Latter-day Saints have shown undaunted pioneer faith and dedication to the gospel of Jesus Christ. The same values that we see in Mormons all over the world—those of dedication to family, hard work, perseverance in the face of adversity, and, most importantly, deep faith in the gospel—resides within us Latinos. Faith is something that no melting pot can ever take away.

This article was originally written in October 2010 and has been updated for this publication run.