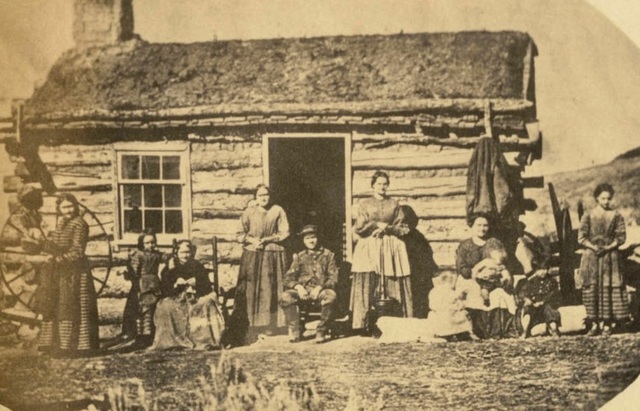 Recently, an NPR podcast cleared up common misconceptions people both inside and outside the Church have about the Mormon practice of polygamy in the 1800s, sharing how the practice actually empowered women in complex ways. The podcast featured Pulitzer Prize-winning historian Laurel Thatcher Ulrich, a Harvard professor who recently published the book A House Full of Females: Plural Marriage and Women's Rights in Early Mormonism.

"Plural marriage empowered women in very complicated ways," Ulrich says, "and to put it most simply, it added to the complexity and the adversity they experienced. And we can argue that women who deal with tough things—or a man—develop certain strengths and aptitudes. It also reinforced an already well-developed community of women to share work, to share childcare, to share religious faith, to share care in childbirth and in illness, in some sense strengthened bonds that were already very much present in their lives."

► You'll also like: How Did Pioneer Women Feel About Polygamy?

Ulrich also specified that the polygamy practiced by Latter-day Saints was very different from those featured in current news articles or shared by popular TV shows.

"Latter-day Saints, like other Americans, believed you had to consent to a marriage. So the woman who was a potential wife had to agree, but in a plural marriage, the prior wife had to agree as well. In fact, in the marriage ceremony, she is involved, and there are some very interesting examples," Ulrich says. "One of my favorites was a man who's first wife had died, and he was courting a potential new wife. And she said, yes, I'll marry you if you'll marry my sister also—seems very, very strange to us. But the idea that they were going to not be parted from a beloved sister was apparently appealing to this woman."

Just as Mormon women had a say in their polygamist marriages in the 1800s, LDS beliefs and views empowered women politically and legally in many other aspects of their life as well.

► You'll also like: When Mormon Women Met with the U.S. President to Defend Their Right to Vote

"Mormons supported suffrage for women," Ulrich says. "For many of us, we think that the women's rights movement is about seizing power over men who appear to be controlling our lives, right to wages, right to divorce, right to enter any profession we would like. In truth, many Mormon women already had those rights. And when they acted publicly in 1870, when this discussion was going on, they astonished the world by creating a very large meeting to defend polygamy, which one woman expressed as the right to choose my own husband."

Ulrich goes on to explain how polygamy and Mormon beliefs actually supported women who were often stigmatized or ostracized during the 19th century.

"Utah had no fault divorce from the beginning. It was very, very open and pretty common. And particularly, I think that made plural marriage workable. If you didn't like it, you could leave. And there was no real stigma," she says. "What's interesting about the Mormons is they sanctified new relationships for women who had fled abusive or alcoholic husbands. A number of these married both monogamously and polygamous among the Latter-day Saints. And they were welcomed into the community and not stigmatized."

For the full story, visit NPR or listen to the podcast below:

Learn more with A House Full of Females: Plural Marriage and Women's Rights in Early Mormonism.

A stunning book that pieces together, through more than two dozen nineteenth-century diaries, letters, albums, minute-books, and quilts left by first-generation Latter-day Saints, or Mormons, the never-before-told story of the earliest days of the women of Mormon “plural marriage,” whose right to vote in the state of Utah was given to them by a Mormon-dominated legislature as an outgrowth of polygamy in 1870, fifty years ahead of the vote nationally ratified by Congress, and who became political actors in spite of, or because of, their marital arrangements.