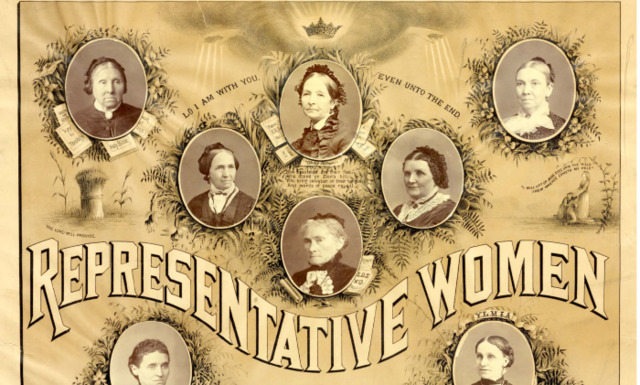 It was the summer of 1878. A group of 13 young men and young women from Mayfield, Utah, went out to enjoy a day of boating on a nearby lake. Tragically, a strong wind caught the group off guard and all but two of them drowned. A shocked community was forced to bury 11 young people, including an engaged couple who were buried in the same grave.

Soon after the accident Relief Society General President Eliza R. Snow arrived in Mayfield with the daunting task of addressing a mourning people. President Snow had been on a speaking tour in the surrounding settlements, but she knew that Mayfield would need a different message than the one she had been sharing with others. She offered words of solace—speaking of the celestial kingdom and encouraging the people to grieve but to also remember and acknowledge the hand of the Lord. People would describe her sermon as “comforting words of hope, soothing, and consoling [for] the bereaved parents and friends.”

After spending months gathering and publishing the teachings of President Eliza R. Snow, Julie Russell says the above story is one of her favorites. A recent project has led Russell to conclude that President Snow is the “epitome of the Latter-day mantra ‘I can do hard things.’”

Russell is the manager for a project with The Church Historian’s Press that is dedicated to making the discourses of Eliza R. Snow, poet and second Relief Society General President of the Church, easily accessible to Church members. President Snow delivered thousands of addresses during her lifetime, and for the first time, they have been organized and published online. Visitors to churchhistorianspress.org/eliza-r-snow are invited to come and learn from one of the most influential Latter-day Saint women of her time. 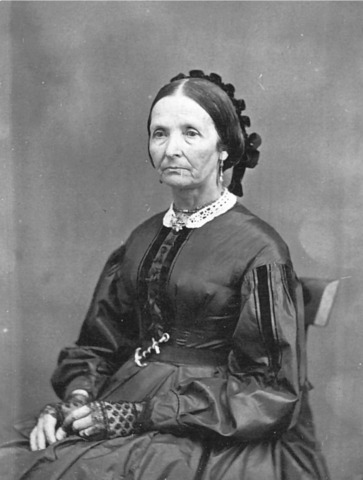 “Members of the Church need to recognize that women had an important and active part in the Restoration and organization of the Church,” says project volunteer Chere Clark. “Eliza's visibility, value, and authoritative voice are a key example of the continuing and indispensable importance of women in building the kingdom of God in the past and in the future.”

Teaching Women to Stand Up and Speak Out

When the Saints began settling in the Salt Lake Valley, President Brigham Young gave the task of organizing Relief Societies throughout the territories to Eliza R. Snow, who had served as secretary of the Nauvoo Relief Society before coming West. Many of the discourses published on the new website come from over 200 handwritten minute books detailing President Snow’s visits to settlements across Utah and southern Idaho as she fulfilled her calling.

“When Brigham Young asked Eliza to help bishops organize Relief Societies and instruct the sisters, she was scared to death. Little by little, with more practice, she grew more comfortable. She spoke freely and extemporaneously, and she encouraged women and young women to always have something to say,” says Jenny Reeder, PhD, 19th Century Women’s History Specialist in the Church History Department. 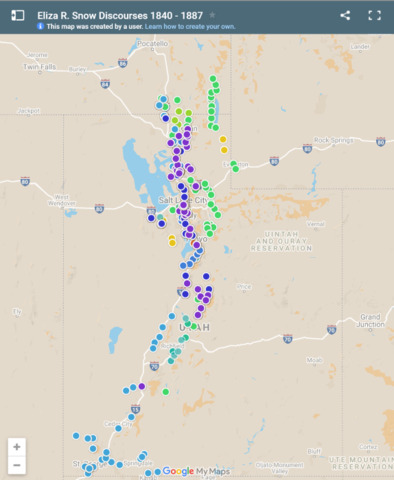 Her bold teachings laid the foundation for the Relief Society organization that is enjoyed by millions of women today.

“She emphasized that women were responsible for working out their own salvation, a rather foreign concept since most women at that time thought their husband was responsible for their salvation,” says Clark. “She consistently taught the women that it was necessary for them to stand up and speak and bear testimony to one another so they would be fit to fill any position they might be called upon to fill—a legacy that women of the Relief Society continue to reap the benefits from.”

We see a continuation of that legacy emulated in President Russell M. Nelson’s recent invitation to women of the Church. In the October 2019 women’s session of general conference he said, “As a righteous, endowed Latter-day Saint woman, you speak and teach with power and authority from God. Whether by exhortation or conversation, we need your voice teaching the doctrine of Christ.”

Reeder hopes that studying the teachings of President Snow will inspire women worldwide to heed the prophet’s counsel.

“I also think it’s crucial that we hear each other’s voices, not only in our own Relief Societies and ministering assignments but also from women around the world. I want to hear the experiences of women in Latvia, Sierra Leone, and Mongolia,” says Reeder.

Uniting Today’s Struggles with the Past

For the team working on the project, studying President Snow’s teachings has been an inspiration for navigating their own sorrows, and they hope it will do the same for others.

“Her trust in God and the restored gospel of Christ was such that she was able to find purpose in the gnarliest struggles,” says Julie Russell of President Snow.

When Russell first started working on the project, she was going through a “gnarly” struggle of her own. She found herself dealing with untreatable depression that was taking a toll on her relationships and making it difficult to participate meaningfully in Church. During this time, one of Russell’s tasks for the project was spending hours deciphering the handwriting on pages and pages of minute books. For Russell, reading through President Snow’s discourses and learning about the lives of other 19th century Latter-day Saint women kept her grounded.

“It was a daily reminder that Jesus Christ is the reason I am here and that He understands my weaknesses and strengths. Eliza and her contemporaries helped me see that we aren’t so different from our predecessors—they struggled with unity, Church policy, and imperfections within themselves and others,” says Russell. “[This project] gave me an opportunity to read other women’s . . . heartfelt testimonies that all [that] they were experiencing and living was not in vain; they had such faith that all would be made right in the end, as long as they leaned on Christ and His teachings.”

One testimony that was especially meaningful to Russell came from President Snow’s teachings on what it means to be “saviors on Mt. Zion.” President Snow shared an analogy in which she compared Latter-day Saint’s roles as saviors to a mother who had just given birth to a baby who wasn’t breathing. Rather than push the baby away, the mother would pull the infant closer and use her own warmth to revive her child. President Snow taught that is what Latter-day Saints should do for each other: if someone is growing cold in the gospel, we need to bring them in to share the warmth, not push them away.

“This teaching impressed me so much that I was able to turn my focus outward, which helps—sometimes, but not always—to dull the aching the depression can cause,” Russell says. “No matter how I feel inside, I am called to be a savior on Mt. Zion, and I don’t want anyone to ever feel lonely and cold or shunned.”

In a different way, Reeder has found comfort in President Snow’s teachings to minister with warmth. She explains,

“I read [Eliza’s] words to know I am not alone. It’s been especially tricky to be a single woman living alone during Coronavirus isolation. I love that Eliza teaches me to draw upon the power of the temple and my covenants, even though I can’t be there or at church right now. She reminds me how to reach out to the women I minister to with love and warmth and the Spirit. She taught that by providing relief to others, we find relief for ourselves. I love that. I need that. We all need that. We all need to provide and find relief.”

Reeder and her colleagues hope that the new website hosting President Snow’s words will pave the way for more of her teachings to be included in lessons for all genders and age groups within the Church.

“We can all draw a little encouragement from this peppy little old lady who magnified the heck out of her calling to organize Relief Societies throughout the territory,” says Russell.

The discourses given by President Snow between 1868–1869 are available now at churchhistorianspress.org/eliza-r-snow. The website will continue to grow as more of Snow’s teachings are released quarterly. The team at The Church Historian’s Press aims to publish a book of selected teachings from President Snow by 2023.

All images screenshots from churchhistorianspress.org/eliza-r-snow.