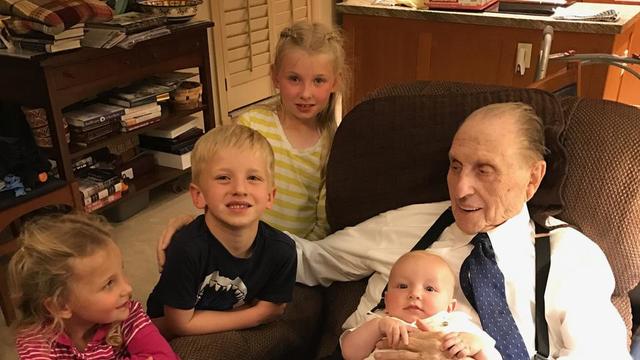 President Monson Shares What He Wants for His 90th Birthday

We love and sustain our prophet, Thomas S. Monson!

His counselors in the First Presidency, President Henry B. Eyring and President Dieter F. Uchtdorf, spend a few minutes with the Church leader — as they do on a regular basis — and wish him a happy birthday.

Surrounding the trio are reminders of the nine decades of President Monson’s life.

A photograph of President Monson and the late Sister Frances Monson leaving general conference hangs on the wall; Sister Monson is waving. A painting portrays the story of the Old Testament prophet Daniel standing in the Lion’s Den. A center piece of beautiful trout is featured on the living room table. And above the fireplace hangs a painting by LaVoy Eaton, given to President Monson at a BYU Management Society dinner where he was honored with the 2004 Distinguished Utahn Award. In a letter President Monson later sent to the artist, he said: “In this painting, which will be featured prominently in our home, you have captured a favorite spot of mine on the Provo River.”