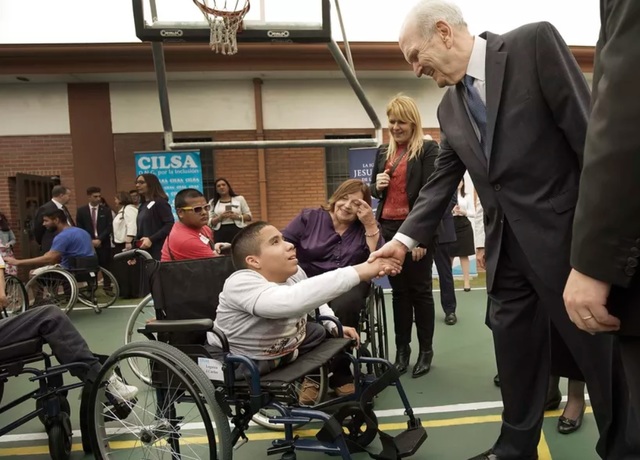 "Hours before President Russell M. Nelson addressed 12,000 members of The Church of Jesus Christ of Latter-day Saints here in Tecnopolis Arena on Wednesday evening, he personally greeted individual children receiving new wheelchairs at a local Latter-day Saint meetinghouse," a recent Church News article states. "To both groups, he offered the same message: The Lord will pour down blessings on those with a willing heart."

As part of his Latin American ministry tour, President Nelson took time to minister to the individual even amidst large gatherings where he ministered to thousands.

In Argentina, Latter-day Saint Charities partners with CILSA—an organization that works toward for the full inclusion of people with disabilities—to provide many with wheelchairs, which gives them better access to education, medical care, and their surrounding communities.

CILSA President Silvia Carranza, who was born with a disability, has the goal “Nobody is left behind."

The Deseret News recently described what these wheelchairs mean for one family in Argentina:

"Standing near a chapel belonging to The Church of Jesus Christ of Latter-day Saints, Paola Loza watched dozens of children move around the outdoor basketball court with the aid of new wheelchairs on Wednesday afternoon.

"Loza was just 18 years old and single when her son, Juan Carlos, was born 14 years ago with half a body.

"When her baby started crawling without the use of functioning legs, Loza’s father found his grandson a skateboard; with it Juan Carlos found mobility.

"A few years later, Loza carried her son and his skateboard down her community’s dirt roads to the local school to register him for kindergarten. 'I was told that without a wheelchair he could not attend,' Loza recalled.

"Still watching Wednesday as other children are fitted for their own wheelchairs, Loza summarized the reality facing many with disabilities in this South American nation. 'The wheelchair means respect,' she said."

Read more about President Nelson's ministry in Argentina on the Church News and how the Church is helping change the life of those with disabilities on the Deseret News.