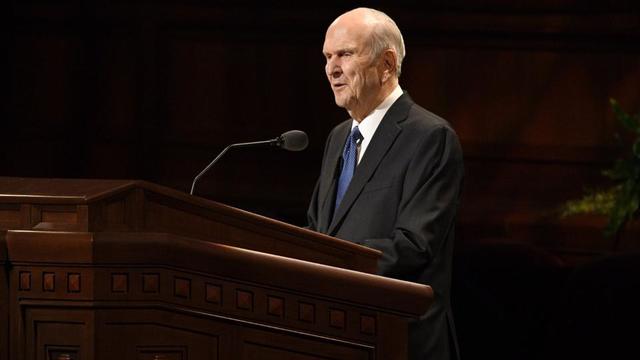 Speaking of the remarkable history of the Restoration, President Nelson shared,  “In the springtime of the year 2020, it will be exactly 200 years since Joseph Smith experienced the theophany that we know as the First Vision. God the Father and His Beloved Son, Jesus Christ, appeared to Joseph, a 14-year-old youth. That event marked the onset of the Restoration of the gospel of Jesus Christ in its fulness, precisely as foretold in the Holy Bible.”

President Nelson then detailed many of the remarkable events that stemmed from that one moment, including "a succession of visits from Heavenly messengers, including Moroni, John the Baptist, and the early Apostles Peter, James, and John. Others followed, including Moses, Elias, and Elijah. Each brought divine authority to bless God’s children on earth once again." The miraculous bringing forth of the Book of Mormon and other scripture, as well as the restoration of the priesthood and covenants followed that first sacred vision.

President Nelson suggested that as members prepare for this marvelous anniversary that they could do four specific things:

1. Read "afresh Joseph Smith’s account of the First Vision as recorded in the Pearl of Great Price."

2. Ponder important questions as we study the Book of Mormon for the Come, Follow Me curriculum next year, such as "How would my life be different if my knowledge gained from the Book of Mormon were suddenly taken away?" or, "How have the events that followed the First Vision made a difference for me and my loved ones?"

3. Incorporate the Church's Book of Mormon videos into your individual or family study.

4. "Select your own questions. Design your own plan. Immerse yourself in the glorious light of the Restoration."

President Nelson promised that as we do these things, "general conference next April will not only be memorable, it will be unforgettable."

Lead image from the Church's newroom