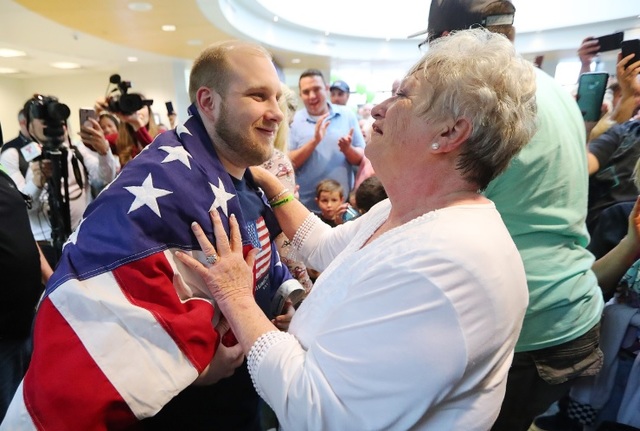 RM Jailed in Venezuela Returns Home to Hero's Welcome, Testifies of the Power of Prayer

After a terrifying, two-year imprisonment, Joshua Holt returned home Monday and shared how prayer and faith helped him through his ordeal. Holt's grandmother, Linda Holt, said, “For 678 days, I posted a prayer on Facebook for Josh and Thamy. Our stake has fasted for them. People (have) prayed for them."

Josh Holt returned home to a hero’s welcome Monday with his wife, Thamy, and two stepdaughters at his side, finally ending a two-year ordeal behind Venezuelan prison bars on what U.S. officials and his family says were false charges.

►You’ll also like: President Trump Announces Josh Holt and His Wife Are Freed from Venezuelan Prison

"Man, that was a long vacation. I don’t recommend a two-year vacation to Venezuela," he joked to about 200 people gathered in the Old Dome Meeting Hall at Riverton City Park where the city threw the Holts a Memorial Day homecoming celebration.

Dozens of people line up outside the building afterward to shake his hand and give him a hug.

"It was hard," he told reporters. "But we definitely felt the help, the support of the people here, of the prayers."