“We have selected a couple of talks from every decade from 1831 to 2016,” Reeder elaborated. “As early as Emma Smith, as early as Lucy Mack Smith as she led the Saints from Colesville, New York, to Kirtland, Ohio, to Elizabeth Ann Whitney in Kirtland, to Eliza R. Snow traveling throughout the Utah Territory. These women had something to say.”

“The 54 discourses in this book show us a lot of the combined wisdom through the decades of Church history that comes from our strongest female voices, their great theological thinking, their insights,” said Holbrook. “It was so important for us to bring in international voices.”

“We also have talks from women around the world, from Judy Brummer in South Africa and from Gladys Sitati from West Africa,” said Reeder.

Each speech includes an introduction and annotation that provides additional context and history. Many of the speeches had never been published, especially those from the early years of Church history. 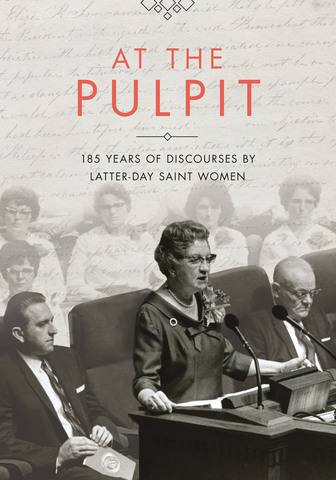 From the banks of the frozen Lake Erie in early May 1831, Lucy Mack Smith admonished her despondent fellow Saints. "Where is your faith in God?" she asked. "If I could make my voice to sound as loud as the trumpet of Michael the archangel I would declare the truth from land to land and from sea to sea."

At the Pulpit contains fifty-four discourses given by Latter-day Saint women throughout the history of The Church of Jesus Christ of Latter-day Saints. Like Lucy Mack Smith, these women drew on inspiration and experience to declare their understanding of eternal truths.