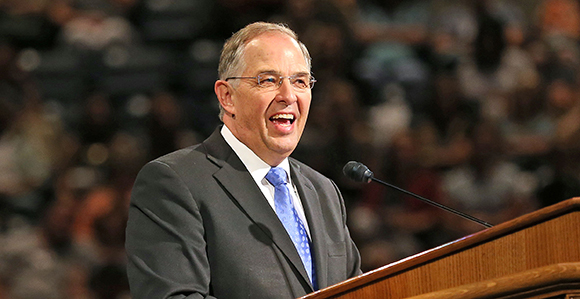 MR says: It's encouraging and comforting to know that in a world that is constantly being filled with evil influences, we have access to another power--one greater than ourselves.

“As evil increases in the world, there is a compensatory spiritual power for the righteous,” Elder Neil L. Andersen of the Quorum of the Twelve Apostles told thousands of people gathered for the BYU Campus Education Week devotional held in the Marriott Center on August 18.

“The Lord has long anticipated this important period of human history,” he said. “He knows the end from the beginning. The Savior has assured us in our day: ‘Be of good cheer, and do not fear, for I the Lord am with you, and will stand by you.’”

Education week students of all ages gathered on the BYU campus to participate in hundreds of classes on a variety of topics. This year’s theme, “Hope, an anchor of the soul,” comes from the scripture found in Hebrews 6:18–19 in the New Testament.

“During those many decades, they moved across the world and used every opportunity to testify of the divine mission of the Lord Jesus Christ and of the Restoration of His gospel,” Elder Andersen said. “And as they bore witness of Him, He refined them, purified them, and sanctified them.”

Sharing some selected statistics from recent studies, Elder Andersen briefly spoke of the harsh realities of the day—an increase in terrorism throughout the world, children born to unmarried couples, a decline in religious affiliation, and an increase in refugees and displaced people around the world. Yet, despite difficulty, Elder Andersen reminded listeners of the contrasting good in the world and the blessings that come to those who follow the Savior.

“We live in very interesting times, yet marvelous times,” he said. “We are in the dispensation of the fulness of times, when the fulness of the gospel has been restored and as the world is being prepared for the Second Coming of the Savior. These are days of looking forward, of beautiful anticipation. These are our days.”