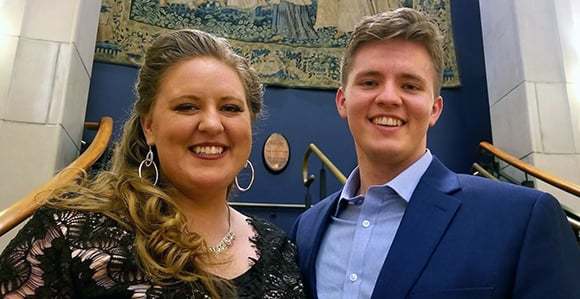 Mary Hoskins and her brother Jonah Hoskins are two rising stars in the opera business. According to Church News, the two Latter-day Saints have competed in or will compete in the most elite opera singing competitions in the U.S. That's why it is so strange the two would decide to take a break from their careers to serve missions, but that sacrifice doesn't seem to have slowed them down.

Like missionaries around the globe, their days were spent finding people to teach and serving others. Mastering the lyrics of, say, Don Giovanni or The Marriage of Figaro was set aside for a season.

“But I did have opportunities to perform, often at my mission president’s request,” said Mary, who admits she sometimes wondered if her voice would change during the layoff.

Jonah enjoyed singing at zone conferences and even sang at an interfaith gathering during the Muslim observance of Ramadan.

Some of Jonah’s fellow opera performers thought he was crazy to interrupt vocal training for missionary service. “But I don’t think serving a mission was ever really a question for me.”

Mormon Life Missions OperaMissions,Opera,Mormon Life
Comments and feedback can be sent to feedback@ldsliving.com