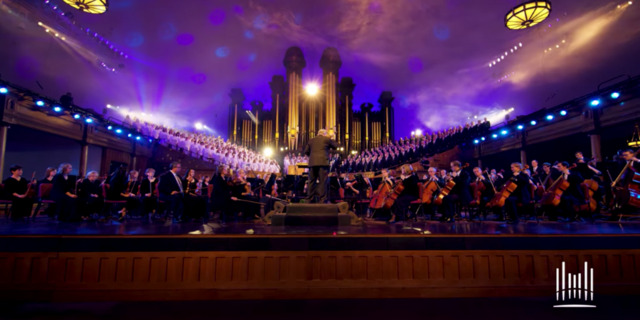 Even though the new music video from the Tabernacle Choir at Temple Square is filmed at the familiar and iconic Tabernacle, viewers may find themselves transported to a galaxy far, far away as they watch it.

The Choir released the music video for “Duel of the Fates,” a song found on their new EP recording, When You Believe: A Night at the Movies, on September 10. The video release coincides with the 110th anniversary of the Tabernacle Choir’s first recording.

The Choir celebrated the anniversary with a news conference held at Temple Square. Choir President Ron Jarrett, Choir Director Mack Wilberg, and historian Richard E. Turley Jr. spoke about the new video’s release, the history of the Choir’s first recording, and what’s ahead for the Choir.

Prior to introducing the video, Jarrett told media in attendance, “You will be surprised.” The music video includes dramatic angles and smoke was directed by Devin Graham, a popular YouTube videographer known to his followers as Devinsupertramp. Filming took place prior to the pandemic.

“We love this video because it’s fun,” Jarrett said. “It was fun to record. It was an enjoyable experience. It was different music than we’ve often sung, and yet it still has a central core, a belief, a faith, and a draw.”

When the Choir released When You Believe: A Night at the Movies, Wilberg told Deseret News that it was of prime importance to have the music be inspirational and faith-promoting. “Both Star Wars and Avengers are about overcoming darkness, darkness to light. . . . The music has to have an integrity about it.”

At the news conference, Wilberg noted the Choir’s history and friendship with John Williams, who wrote a piece for the Tabernacle Choir as part of opening ceremonies of the Winter Olympics in 2002 in Salt Lake City.

“It is a little bit of a bonus to do this piece that we normally wouldn’t do on a Sunday morning, for instance, and you could tell everyone was having a great time doing it,” Wilberg said.

► You may also like: The Tabernacle Choir hits No. 1 on Billboard charts for 14th time

History of the First Recording

On September 1, 1910, the first recording of a large choir (the Tabernacle Choir) took place in the Salt Lake Tabernacle for the Columbia Phonograph Company. At the time, recording was done acoustically meaning that no microphones were used.

“Instead the musical sound waves traveled down a large horn and vibrated a sapphire needle that ran along a flat disc made primarily of wax heated to 95 degrees Fahrenheit, creating a recording master,” Turley explained. “The wax master could then be used to mass-produce 78 RPM shellac records for commercial distribution.”

Using that technology worked well when recording solo artists and small groups, but record companies were eager to go beyond those limitations to capture large choirs, orchestras, and massive organs with their many pipes, Turley said.

An engineer for Columbia Phonograph Company traveled to Salt Lake to attempt a recording in the Salt Lake Tabernacle. On August 30 and 31, the engineer recorded organist John J. McClellan, and on Thursday, September 1, the Choir was recorded.

“To record the Choir the engineer suspended two large receiving horns on a rope strung between the north and south balconies,” Turley explained. “He aimed one at the sopranos and altos, the other at the tenors and basses. He had all the choir members pack closely together, which required that the women remove their hats which were fashionable at the time. All choir members were then asked to face the horns and sing toward them.”

That evening, the Choir recorded 12 numbers directed by Evan Stevens. Eight of those recordings were released commercially. Now, the Choir has had 97 releases, with 48 CDs, 28 DVD/VHS and Blu-ray, and 21 books. As part of the news conference, a 1910 recording of McClellan on the organ was played. Turley noted it may sound like the organist is rushing because the technology at the time only allowed for a maximum recording of 3 minutes and 15 seconds on each side of a record. You can listen to the recording at minute mark 10:58 in the video below. 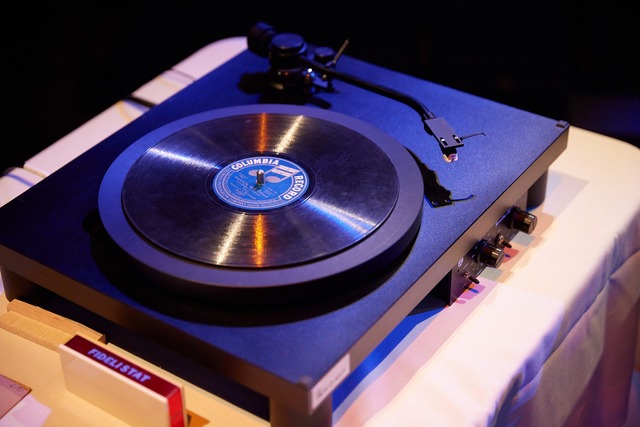 “Today the 1910 records are extremely rare with all the known copies being in institutions and a couple private collections,” Turley said. “As best I can tell as a historian, they are rarer than a Book of Commandments, the first published compilation of Joseph Smith’s revelations, copies of which have sold for well over $100 million dollars.”

► You may also like: This Newsroom infographic highlights 110 years of recording excellence by the Tabernacle Choir

Wilberg noted that the Choir has always been at the forefront of technology.

“That technology has opened a completely new world for everything, but particularly for the Choir and its access,” Wilberg said.

Jarrett noted that the Choir is active on all social media platforms, and the Choir’s YouTube channel has over 247 million views.

“In fact, during this global pandemic that we’re experiencing, the Choir and Orchestra has been viewed more consistently, more frequently, and been brought to be part of people’s lives more consistently as they worship from home,” Jarrett said. “Many people find the peace and comfort of great music throughout the world.”

Jarrett noted that sharing these messages continue the Choir’s mission to draw listeners to the divine and to celebrate God’s love for all His children.

► You may also like: Sleek new Tabernacle Choir logo with special symbolism released

Though the pandemic may have canceled this year’s Christmas concert, Wilberg shared some of the Choir’s upcoming offerings. A CD and DVD of the 2019 Christmas Concert featuring Kelli O’Hara and Richard Thomas is available now for preorder along with a book adaptation, Christmas Day in the Morning—the story that Thomas presented onstage during the live concert. In December, the concert will become the 17th annual PBS Choir Christmas TV Special.

The Tabernacle Choir and Orchestra at Temple Square present a collection of beloved songs from the silver screen. Celebrating uplifting melodies, positive stories, and the inspiring imagination of great filmmakers in recent years, the 360-member Choir and full Orchestra breathe new life into these arrangements like nobody else can. Hold on to your seats for an exciting journey through timeless melodies, epic soundscapes, and an awe-inspiring tour de force of musical talent. Available now at DeseretBook.com.