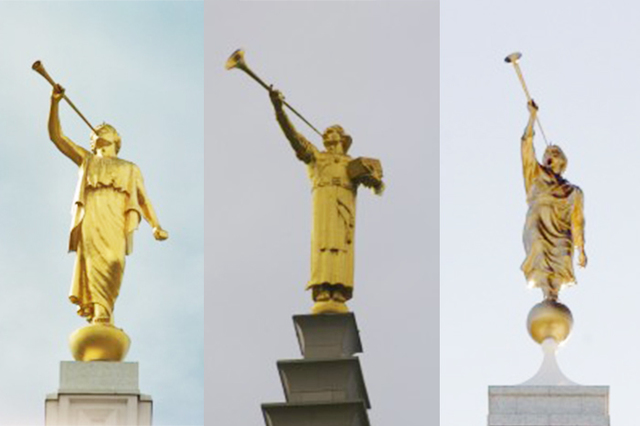 The 8 Designs of the Angel Moroni Statue

Seeing an Angel Moroni statue atop the temple can be awe-inspiring. But not every Moroni is the same. In fact, there are eight different Moroni statues in use by the Church today!

But Angel Moroni statues did not always top temples. The earliest LDS temples had weathervanes, and it wasn’t until the 6th temple — the Salt Lake Temple — that the Moroni statue was introduced. The next Moroni statue wouldn’t be placed on a temple until 1956!

1983 marked the turning point. The Atlanta temple featured an Angel Moroni statue, and of the 126 temples dedicated since then, only 2 did not receive an Angel Moroni before dedication, and even those got a statue within a year.

Of the 15 temples that had originally been built without a statue, seven have been retrofitted with one. Of the fifteen not yet dedicated temples for which designs have been released, all have Angel Moroni statues planned. With one exception.

The Paris France temple made a design choice to have no spires, and consequently no Angel Moroni will be placed. Could this mark a new direction? Or is it a single blip on a thirty year tradition?

Of the Angel Moroni’s in use, each has an interesting and unique history that tells us something of the time and conditions of where the temple was built. Did you know that in the early days of the restoration of the Gospel, before there were ever Angel Moroni statues, there were weathervanes?

The first temple of the Restored Church was dedicated in 1836 in Kirtland, Ohio. On top of the single tower a weathervane turned with the wind.

At the time, weathervanes were often placed on the tallest buildings in a community —  churches and civic buildings alike — and were of great use to communities whose industries were often dependent upon the weather for survival.

The Nauvoo Temple had a 3-dimensional weathervane in the form of an unnamed figure made of tin and gilded in gold. It was fashioned in the likeness of a man, holding a book raised in one hand and a trumpet to his lips in the other, wearing robes and a cap and lying horizontal as if flying.