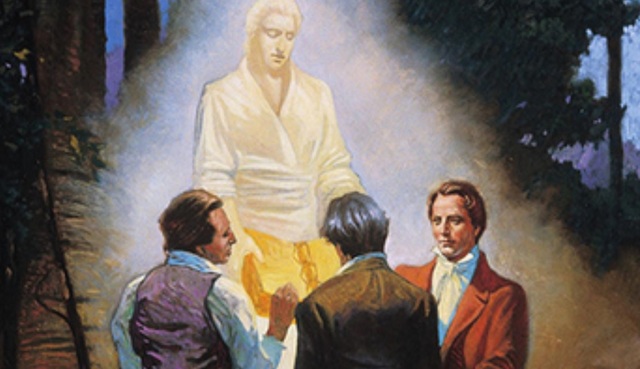 At some point in our lives, all of us will ask and worry and wonder why we are not receiving an answer to our prayers. Even—and sometimes especially—when we most want to follow the Lord's will for us, we can become frustrated when He seems inexplicably silent.

Joseph Smith experienced such an occasion while he was accomplishing the work of translation. The following is an account by the prophet Joseph Smith, as told in History of the Church:

Not many days after the above commandment [Doctrine and Covenants section 17] was given, we four, viz., Martin Harris, David Whitmer, Oliver Cowdery and myself, agreed to retire into the woods, and try to obtain, by fervent and humble prayer, the fulfilment of the promises given in the above revelation—that they should have a view of the plates. We accordingly made choice of a piece of woods convenient to Mr. Whitmer’s house, to which we retired, and having knelt down, we began to pray in much faith to Almighty God to bestow upon us a realization of these promises.

According to previous arrangement, I commenced by vocal prayer to our Heavenly Father, and was followed by each of the others in succession. We did not at the first trial, however, obtain any answer or manifestation of divine favor in our behalf. We again observed the same order of prayer, each calling on and praying fervently to God in rotation, but with the same result as before.

Upon this, our second failure, Martin Harris proposed that he should withdraw himself from us, believing, as he expressed himself, that his presence was the cause of our not obtaining what we wished for. He accordingly withdrew from us, and we knelt down again, and had not been many minutes engaged in prayer, when presently we beheld a light above us in the air, of exceeding brightness; and behold, an angel stood before us. In his hands he held the plates which we had been praying for these to have a view of. He turned over the leaves one by one, so that we could see them, and discern the engravings thereon distinctly. He then addressed himself to David Whitmer, and said, “David, blessed is the Lord, and he that keeps His commandments;” when, immediately afterwards, we heard a voice from out of the bright light above us, saying, “These plates have been revealed by the power of God, and they have been translated by the power of God. The translation of them which you have seen is correct, and I command you to bear record of what you now see and hear.”

I now left David and Oliver, and went in pursuit of Martin Harris, whom I found at a considerable distance, fervently engaged in prayer. He soon told me, however, that he had not yet prevailed with the Lord, and earnestly requested me to join him in prayer, that he also might realize the same blessings which we had just received. We accordingly joined in prayer, and ultimately obtained our desires, for before we had yet finished, the same vision was opened to our view, at least it was again opened to me, and I once more beheld and heard the same things; whilst at the same moment, Martin Harris cried out, apparently in an ecstasy of joy, “’Tis enough; ’tis enough; mine eyes have beheld; mine eyes have beheld;” and jumping up, he shouted, “Hosanna,” blessing God, and otherwise rejoiced exceedingly.

Joseph Smith's persistence resulted in the opening of the heavens, but it did not come at the same time and in the same way for all the witnesses of the Book of Mormon. God's timing, His answers, and His communication to each of us is unique. He understands us perfectly and knows what we most need.

We do not always receive inspiration or revelation when we request it. Sometimes we are delayed in the receipt of revelation, and sometimes we are left to our own judgment. We cannot force spiritual things. It must be so. Our life’s purpose to obtain experience and to develop faith would be frustrated if our Heavenly Father directed us in every act, even in every important act. We must make decisions and experience the consequences in order to develop self-reliance and faith.

Even in decisions we think very important, we sometimes receive no answer to our prayers. This does not mean that our prayers have not been heard. It means only that we have prayed about a decision that, for one reason or another, we should make without guidance by revelation. Perhaps we have asked for guidance in choosing between alternatives that are equally acceptable or equally unacceptable.

More than 200 other stories are included in Best-Loved Stories of the LDS People, such as Joseph F. Smith's encounter with a rough anti-Mormon in "True Blue, Through and Through" and "Fooling a Bulldog," by Parley P. Pratt. You'll find stories about faith, answers to prayer, and revelation, courage, honesty, and many other gospel principles and doctrines. A valuable reference that belongs in every Latter-day Saint home.