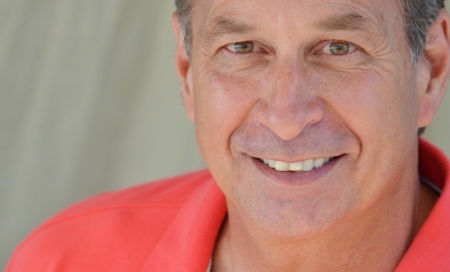 The Incredible Story of How One LDS Comedian Joined the Church

January 10, 1989, was a more important day in Mike Guido's life than he realized at first.

Mike had just finished a routine at a club in San Franciso as the opening act for two of the most famous comedians of the day: Bobcat Goldthwait and Robin Williams.

"Little did I know my future wife was in the audience," Mike chuckles.

Seeing "a beautiful woman" sitting in the restaurant portion of the club, Mike walked over and introduced himself to the future Mrs. Guido.

But the conversation took an unexpected twist within the first 10 minutes of Mike and Laurine meeting each other.

"She started asking me questions like, 'Are you happy?'" Mike says. "I'm like, 'Yeah I'm happy. I'm on stage with Robin Williams, are you kidding me?'" And she said to me, 'You don't know how happy you can be.'"

Laurine talked to Mike about the Church and asked if he would be interested in meeting with the missionaries.

But Mike met with missionaries, and it was a good thing, too. It turned out Mike was what his missionaries called a "golden contact." When Mike first heard the missionaries talk about the gospel, "it just felt like coming home," he says.

He took all of the discussions in two weeks and was baptized on February 18, 1989. Not many months later, he was married to Laurine on August 12.

But as Mike continued his career, now as a Mormon, he came across some new challenges. Right after Mike was baptized, he says he began to feel uncomfortable about working on Sundays. Most of the comedy clubs hosted comedians Wednesday through Sunday, Mike says, and many of his shows included working Sundays as a result. While he would still go to church wherever he traveled for shows, Mike said he felt impressed to "look into the Sunday thing."

So Mike talked to his wife about his concerns, and she suggested he pray about it.

"And I did—I got on my knees and I prayed and asked about me, specifically, working on Sundays," Mike says. "It was one of those times when the answer was crystal clear: Nope. You, Mike Guido, shouldn't be doing your shows on Sunday."

So he called up the clubs he was scheduled to perform at. While some were willing to give Mike Sundays off, others were not. "I began crossing weeks and weeks of work off my calendar," Mike says.

But then something special happened. Mike's emptied calendar began to fill up again as complete strangers, some of whom were fellow Christians, called and offered him work, until 80 to 90 percent of the lost jobs were replaced.

Though Mike no longer travels as much as he used to work for comedy clubs, he often works a one-man show revolving around one of his nine children, Maria. When she was 3 years old, Maria was diagnosed with autism spectrum disorder and is low functioning.

"Our family revolves around Maria," he says. "I tell people my kids can fight with each other and they can get serious because we're Guidos and we're Italian. But I'll tell you, if anybody messes with Maria, you've got a lot of angry Guidos on your hands. Everyone is united in Maria. She is a blessing to our family."

For the past five years, Mike has performed his show "A Real Man—Dad. Daughter Autism" about Maria, and he and often performs for autism fundraisers and organizations.

It's this show that has helped him redefine what it means to be a great comedian.

"I used to gauge everything, as a comedian, on 'Hey, people laughed, it was a successful show!' And that's a really great feeling to make people laugh," he says. "But in my show 'A Real Man—Dad. Daughter Autism,' I tell the whole story and people cry at this show. I mean they laugh some, but people literally cry and that blows me away every single time."

Through all of his experiences, Mike says being a Latter-day Saint and keeping his routines clean has made him better at his craft.

And though a few of his colleagues couldn't understand why he joined the Church, Mike says he's still a happy and fun-loving guy.

And his friends have noticed.

"There have been comments made that this . . .Mormon thing works," he says. And a lot of people are blessed because of it.