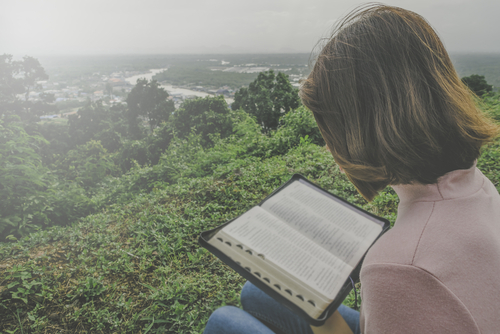 The Surprising Meanings Behind "Enos" and "Noah": Insights into Book of Mormon Names

Ancient scripture writers often used the literary pattern of paronomasia (word plays and word puns) to convey significant theological messages (see here and here). Bible and Book of Mormon authors used names of individuals as a means to teach core principles. If we could read the original Hebrew and Egyptian texts of the Book of Mormon, we’d find names repeated thematically throughout the text. Just as a modern persuasive writer today will repeat their thesis statement in multiple ways throughout their writing, so too, ancient prophets used names and derivatives of names to reinforce in meaningful ways the major idea they wished for readers to see in the text.

Such word plays constitute beautiful, significant, even brilliant literary sophistication of Book of Mormon writers. Prophets also employed names to call our attention to other individuals in scripture with the same name. Remember when Helaman named his sons Nephi and Lehi (see Helaman 5:6-7)? He did so to call to their remembrance the good lives of their forefathers. But such naming and remembering goes beyond simply thinking of another similarly named person. Naming and wordplay provide opportunities to compare and contrast scripture stories that might otherwise not be brought together. For example, consider the literary and theological role three names play in teaching truths:

Enos was one of the first words Hebrew children would learn. Enos simply means “man.” The prophet named Enos in the Book of Mormon was a true man of God. Perhaps his name was meant to remind Enos that the One we worship is the Man of Holiness (Moses 6:57). These ideas heighten the complexity and meaning of Enos’ name. No longer does his name seem simple. Rather, his name invited him and all of us to remember the Man we call Father. To seek to live like Him, emulate Him, and render Him thanks all day and all night.

Enos can also be seen as a wordplay hearkening back to the patriarch Jacob’s nighttime wrestle with an angel (see Genesis 32:24-32). Like Jacob from the Old Testament, Enos wrestled before the Lord all night long, seeking answers, seeking blessings. If we peel back the translation of the Bible and look at the Hebrew, we see that the angel who wrestled with Jacob was called an enos, a man (see Genesis 32:24). So perhaps The Book of Mormon writers included this story of Enos to teach us that, like the great prophet Enos and the great patriarch Jacob, we too can engage in the wrestle for blessings, faith, and humility. We can have confidence that God will answer our prayers and grant us the righteous blessings we seek.

King Noah in the Book of Mormon was such a notorious character. It seems inappropriate that he would carry the same name as the noble prophet Noah from the Old Testament. However, there are lessons to be learned from the name regardless of its bearers.

In Hebrew, Noah means “rest.” From an Old Testament standpoint, we can immediately see the wordplay. God wanted to rest from the wickedness of the world, the ark came to rest on Mount Ararat, and the dove could find no rest until the waters dried up.

But what does the name Noah mean within the Book of Mormon? Significantly, the word “Noah” can also hold the negative meaning of “lazy.” And who is the laziest king in the whole entirety of the Book of Mormon? King Noah! It is easy to see how lazy the king and his priests are when contrasted with the industrious and heavy laboring citizens:

“Yea, and thus [King Noah and his wicked priests] were supported in their laziness, and in their idolatry, and in their whoredoms, by the taxes which king Noah had put upon his people; thus did the people labor exceedingly to support iniquity” (Mosiah 11:6, emphasis added).

In the Book of Mormon, we see what happens when a society has a lazy king (like Noah) compared to righteous kings (like Benjamin or Mosiah II) who labored in the service of their people.

Another unexpected insight from this story can be derived by comparing some of the broad outlines of the story of King Noah to Noah in the Bible. In both stories, men called Noah introduced viticulture (the planting of vineyards, winemaking, and drunkenness) into society. Noah in the Old Testament was the first person mentioned who planted a vineyard and who also later became drunk. King Noah was the first person mentioned in the Book of Mormon to plant vineyards and to bring about drunkenness. Significantly in each story, curses follow drunkenness.

We doubt that young Joseph Smith would have been able to create such a brilliant use of Hebrew wordplay with the name Noah in the Book of Mormon. Perhaps he could have thought to use a positive Bible name for a negative character, but could he have provided a story arc that captured the subtle contours and theological message of Noah in the Old Testament?

If we render the relevant passages in chiastic literary form (another ancient near-eastern literary technique centered on a major idea), we see that the word Heshlon is at the very middle of a chiasm. The word is literally and literarily demonstrating its own meaning, “the place of crushing,” as it is crushed between the competing ends of the chiasmus. (See the Chiasmus here from Dr. Matt Bowen’s article “Place of Crushing: The Literary Function of Heshlon in Ether 13:25-31”).

Not only are the presence of ancient literary structures within the Book of Mormon amazing but they survived translation into English. That is even more amazing and far beyond the capabilities of young Joseph Smith.

The Book of Mormon is literarily beautiful, doctrinally truthful, and everlastingly applicable. Three simple names within its pages prove to not be so simple after all. They stand as additional evidence that the book is of ancient origins and was brought forth by the gift and power of God.

(For more on the name Enos see: Matthew L. Bowen, “Wordplay on the Name 'Enos',” Insights 26/3 (2006): 2. publications.mi.byu.edu/fullscreen/?pub=1321&index=3; Matthew L. Bowen, “‘And There Wrestled a Man with Him’ (Genesis 32:24): Enos’s Adaptations of the Onomastic Wordplay of Genesis,” Interpreter: A Journal of Mormon Scripture 10 (2014): 153. mormoninterpreter.com/and-there-wrestled-a-man-with-him-genesis-3224-enoss-adaptations-of-the-onomastic-wordplay-of-genesis/; Matthew L. Bowen, “I Kneeled Down Before My Maker”: Allusions to Esau in the Book of Enos. Interpreter: A Journal of Mormon Scripture 27 (2017): 29-56. mormoninterpreter.com/i-kneeled-down-before-my-maker-allusions-to-esau-in-the-book-of-enos/.

For more on the name Noah see: Matthew L. Bowen, “‘And He Was a Young Man’: The Literary Preservation of Alma’s Autobiographical Wordplay,” Insights 30 (2010): 2‒3. publications.mi.byu.edu/fullscreen/?pub=1369&index=3; Matthew L. Bowen, “This Son Shall Comfort Us”: An Onomastic Tale of Two Noahs,” Interpreter: A Journal of Mormon Scripture 23 (2017): 263-298. mormoninterpreter.com/this-son-shall-comfort-us-an-onomastic-tale-of-two-noahs/.)

Taylor Halverson is a BYU Teaching and Learning Consultant. He recently helped edit the new book Knowing Why: 137 Evidences that the Book of Mormon is True and has published and presented widely on scripture, innovation, entrepreneurship, technology, teaching, and learning and has PhDs in Biblical Studies and Instructional Technology. Click here to request a free eBook Memoirs of the Ward Rumor Control Coordinator, a light-hearted look at our beloved Mormon culture. More at taylorhalverson.com.

Brad Wilcox is an associate professor in religious education at BYU and the author of The Continuous Atonement and the book, Changed through His Grace.