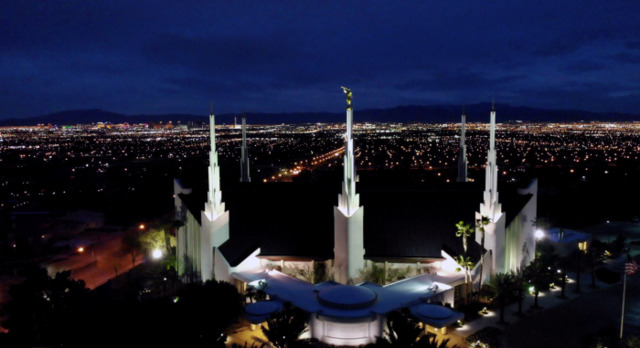 The ‘crowning jewel’: Lesser-known stories behind the building of the Las Vegas temple

Editor's note: This article appears in the November/December 2020 issue of LDS Living magazine.

President Gordon B. Hinckley was once asked by the local Southern Nevada press why Las Vegas was selected as a place for a temple. His response was, “I don’t know of any place in all the world that needs one more. I don’t know of a place in the world where you see more clearly the contrast between evil and good, than you do in this city. This place needs a temple.”1

On April 7, 1984, President Hinckley, then the Second Counselor in the First Presidency, announced in the semiannual general conference that a temple would be erected in Las Vegas. It would become the 43rd operating temple of the Church. For Robin Dixon, a Latter-day Saint native of Las Vegas, the announcement was “thrilling.”2 And for Tom Thomas, son of famed Las Vegas banker E. Parry Thomas, it was an announcement that brought the community together:

When the announcement came out, what I remember was a great deal of support from all the other faiths. And I believe that the building of a temple in Las Vegas, to members of other faiths, . . . was a bookmark that this is a good place, this is a community, there are families that are here, and now The Church of Jesus Christ of Latter-day Saints is going to build a temple here.3

► You may also like: Latter-day Saint Temple Featured on the Cover of the "Las Vegas Sun"

In his dedicatory prayer, President Hinckley said, “We thank thee for the faith and skills of all who have contributed to make it possible.”4 One of those key players with conviction as well as skills and gifts was the temple architect, George G. Tate. Tate had been spiritually prepared for this sacred work as a Church member in his youth, though he did not fully recognize it until decades later. Tate wrote,

When I received my patriarchal blessing at age 16 . . . mention was made several times of my future involvement in temples and temple building. . . . None of this sank in very deeply until age 52, [when] I sat in my living room watching general conference on television.5

Tate heard the announcement by President Hinckley of a temple to be constructed in Las Vegas. Remembering the promise in his patriarchal blessing, he soon wrote a letter to his area representative requesting that his firm be considered for the job.6 Ultimately, Tate’s firm was chosen, and despite sometimes intense opposition from community members and occasional difficulty getting clearances, work on the temple soon began in full swing.

But construction and architectural firms weren’t the only ones contributing to the temple building. At the time of the temple’s announcement, former North Las Vegas mayor and current member of the Church Shari Buck recollects that though she was a young mother with two children and pregnant with her third, “My husband [Keith] and I . . . took all of our savings and donated it toward the temple fund. . . . It was a sacrifice because we were a young family, . . . but we felt like it was the right thing to do.”7 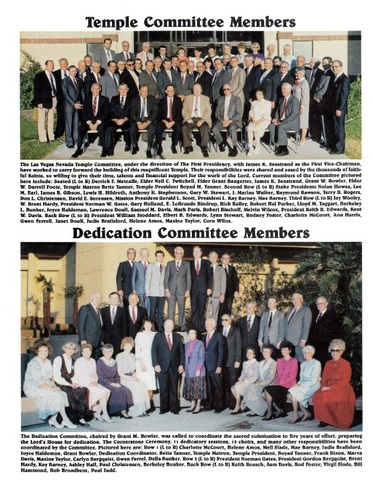 Ed Smith, then a bishop seeking temple funds from members of his ward, remembers,

In fact, Mahlon Edwards recalls that the fundraising was so prolifically beyond what was expected or needed that President Hinckley had to tell the stake presidents in the Vegas region, “Brethren, you’ve got to stop raising money.”9

► You may also like: The Miraculous Story Behind the Laie Hawaii Temple

On November 30, 1985, the groundbreaking ceremony was held, with President Hinckley (the First Counselor in the First Presidency at the time) dedicating the land in a small assembly before addressing a gathering of 8,000 to 9,000 members and friends of other faiths at a nearby convention center.

Regional Representative Elder James K. Seastrand recalls, “This assembly set a new experience for the Church in temple groundbreaking—a small gathering with its proceedings videotaped; a large indoor assembly with the videotape shown as part of the program. The assembly program was a beautiful experience.”

After the temple was completed, an open house was held. A temple open house can have a tremendous impact on a community and on individuals. Such was the case with Mrs. Loran Amadore, who lived near the Las Vegas site and had apprehensions about the proposed edifice.

That is, until she went through a Latter-day Saint temple in Texas just two months prior to the decision of whether or not the Las Vegas temple could be built at the base of Sunrise Mountain. In an article she sent to the Las Vegas Sun, published under the heading “Big asset,” Amadore praised the Texas temple she had visited as one of the most beautiful buildings and grounds she had ever seen.10

► You may also like: Watch the Jordan River temple get built in 90 seconds in incredible time-lapse

When the touring days concluded, Robert (Hal) Parker, chairman of the temple open house committee, wrote a letter to each of his committee members letting them know that the Temple Department had informed him, “This is the smoothest open house we have ever seen.” Parker further noted that many of the visitors had said, “It is not just the beauty of the temple that we admired but it was the beauty of the people who were working there, so happy and delightful.” One guest who was not a Latter-day Saint stated, “I saw the Lord in the eyes and the faces of the hosts.”12

Less than a month before the temple dedication, Steve Wynn’s luxurious Mirage hotel was completed and opened its doors. The Mirage could then boast of being the largest hotel in the world, with over 3,000 rooms, erupting volcanoes, and an exotic getaway aura, but the total expense of this resort, combined with hotel and casino, came at an exorbitant cost of $630 million.13

Cristi Bulloch, who was part of a subcommittee involved with the temple’s open house, notes, “I remember when the temple was announced and it was right about the same time they announced that Mirage hotel . . . and the difference between the Mirage, . . . and our temple, there was such a different feel there. And when the temple was done . . . it just felt like it was the right thing, that finally our pioneer heritage had this edifice that would represent really what Las Vegas was started to be: a family community.”14 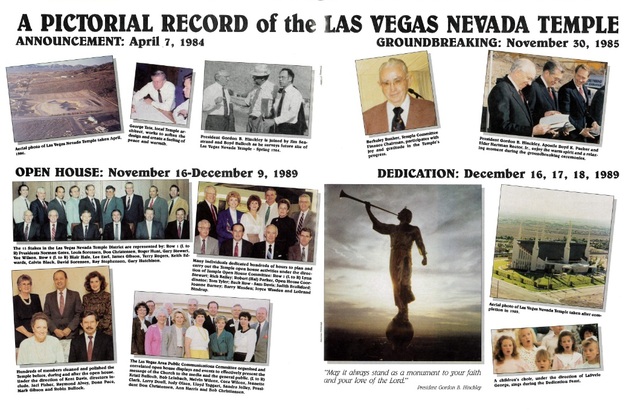 The dedication on December 16, 1989, was a very special and sacred day. President Ezra Taft Benson presided over the cornerstone ceremony and there expressed his love to about 10,000 Church members.15 President Hinckley told the assembled Saints, “Never has there been so beautiful a day in Las Vegas as we dedicate the House of the Lord, the crowning jewel overlooking the city.”16 He also stated, “I don’t know of more faithful Latter-day Saints than in this temple district. . . . I believe the Lord has accepted your sacrifice. I want to make you a promise that you will never miss that which you have contributed; the windows of heaven will be opened.”17

► You may also like: Remembering the Salt Lake Temple as it closes for 4 years

A Light for the Future

Buck points out that one of the strengths of Las Vegas is that it is an international city that hosts over 40 million visitors annually. Many of the Latter-day Saint visitors, Buck says, “will come and do sessions at the temple, and that’s exciting, too, to meet and share testimony with people from all over the world that happen to come into Las Vegas for a conference or for a visit . . . so, that strengthens us as members.”18

Visits to view the exterior of this beautiful, inspiring temple have also attracted others who are not Church members. For example, local member Ashley Hall recounts that while serving at the front desk of the temple, “I’ve had people come in that front door of the temple—nonmembers who would say, ‘Why does this temple shine? I mean, I live down the hill a little way, and I find myself on my back patio and I look up at this glow around the temple. It [doesn’t have] lights on it. It does at night, but not in the daytime,’ and so we would have those conversations.”19

Bulloch adds, “I think that there’s a security about having a temple here in Las Vegas to even people who aren’t members of the Church. . . . Having a temple here locally has been a wonderful thing in that it feels like it brings peace to our community.”20

Dixon concludes, “[When] I work there as a temple worker, it’s just manna to my soul. It feeds my spirit. It just fills me with love and gratitude that we have a temple in this valley.”21 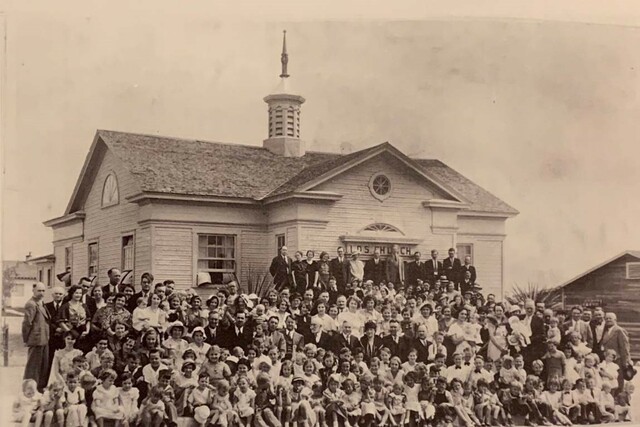 Fred E. Woods is a professor at Brigham Young University and currently holds a BYU professorship of Moral Education. This short article is a segment of a forthcoming book and companion documentary film both titled Bright Lights in the Desert: The Latter-day Saints of Las Vegas.