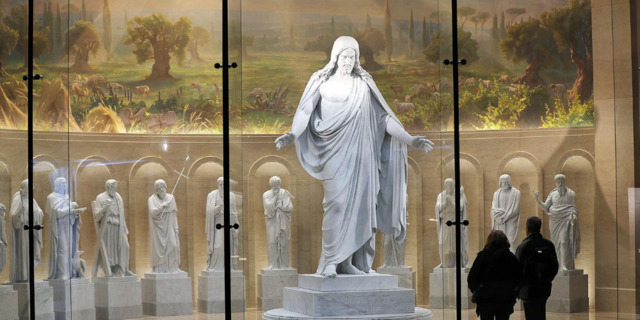 The essential daily question Jesus Christ asks all of us

First and last words have always intrigued me. Their positioning adds a dimension of importance. The first and last words of Jesus in the Gospel of John are questions—very relevant questions for us all, very simple questions, which is wonderful to me. Let’s look at Jesus’s first three words. John the Baptist was standing with John the Beloved and Andrew by the Jordan River just north of the Dead Sea when Jesus walked by, drawing from the Baptist the words, “Behold the Lamb of God! And the two disciples heard him speak, and they followed Jesus. Then Jesus turned, and saw them following, and saith unto them, What seek ye?” (John 1:36–38; emphasis added).

There is an essential daily question Jesus asks all of us! “Michael,” He says to me, “what seek ye? What do you desire of life?” At different points on my earthly climb, I might have answered that in various ways. How would you answer it? What are you seeking—really, truly, deeply seeking? Andrew, John, and John the Baptist don’t quite know how to answer that question on the deeper level, but they want to know where to find Him, so they ask Him where He dwells. This brings from Jesus what I call “the Great Invitation”—three simple words: “Come and see” (John 1:39). These words are echoed later by Philip to Nathanael, “Come and see” (John 1:46); by the woman at the well, “Come, see a man, which told me all things that ever I did” (John 4:29); and even by Pilate at the trial of Jesus: “Behold the man! . . . Behold your King!” (John 19:5, 14).

What is it that we truly seek in life? Notice also that the word seek suggests effort and commitment. I remember that when I or the children lost something in the house and could not find it, we always turned to Laurie, my wife and their mother. She would inevitably find the missing item fairly quickly, then add in a humorous but emphatic tone: “Move something!” We were hoping things would just turn up. I can hear the Lord occasionally say to me, when I am looking and hoping for some soul-blessing gift that doesn’t come right away: “Move something!”

Lucifer usually approaches us with a similar question: “What do you want?” But he can only offer what money or power can obtain. He tried this approach on Jesus during His preparation in the wilderness. I can’t help but compare the implied efforts of the word seek with the effortlessness of the word want. Do we seek truth? The Spirit? Do we seek comforts? Pleasure? Friendships? I think most of us would say to Jesus, “Lord, I just long to be happy! I just desire peace! I need love! I want to feel good about myself.” To these essential desires, Christ responds, “Well, if you want joy, peace, love, serenity, truth, or the Spirit, come and see. Follow me and you shall have all you seek.”

I have taken many long walks with Jesus’s first three words revolving through my mind. Many people I meet are in doubt about what they really hope for in life; or they want certain things but may not realize the need to seek them or how to do it; or cannot perceive that what they are currently seeking will not give them what they really desire. I remember a little book I used to read to my children called The Giving Tree, by Shel Silverstein. It was a simple and delightful but thought-provoking book about a boy who spent his life trying to figure out what he really needed until, in old age, he was happy to just rest. Well, “rest” is also something the Savior promised to those who follow Him: “Come unto me, all ye that labour and are heavy laden, and I will give you rest” (Matthew 11:28).

In section 7 of the Doctrine and Covenants, Jesus asked, “John, my beloved, what desirest thou?” (Doctrine and Covenants 7:1). In the Book of Mormon, Jesus asked each of His twelve disciples “one by one” as He was preparing to return to His Father, “What is it that ye desire of me, after that I am gone to the Father?” (3 Nephi 28:1). I am sometimes tempted to ask, “Lord, isn’t this backward? What do you want me to do for you?” But He is the Giving God and gently holds to His question: “No, Michael, what can I do for you? What is it that ye desire of me?”

In high school, for reasons I could not have explained then, I was profoundly moved by the experience and words of Henry David Thoreau, who built a small cabin by Walden Pond near Concord, Massachusetts. He, too, was seeking, and concluded: “I wished to live life deliberately, to front only the essential facts of life, and see if I could not learn what it had to teach, and not, when I came to die, discover that I had not lived. I did not wish to live what was not life, living is so dear. . . . For most men, it appears to me, are in a strange uncertainty about it.”1 The first three words Jesus spoke in the Gospel of John are designed to move us to thought, so we will not have a “strange uncertainty” about life and what we hope to gain from it. To be totally honest, at this point and situation in my life, since my wife, Laurie, passed nine years ago, I tell my Savior: “I seek Laurie. Can you give her back to me, Lord? As lovely as my mind remembers her?” And even in this, He replies, “Come and see.”

I hesitate to suggest a particular answer to any of Jesus’s questions, but He does give us more than a hint about at least one way we may answer those initial three simple words. We do know what He sought—how He would have answered His own question. “I seek not mine own will, but the will of the Father which hath sent me” (John 5:30). That was the essence of His life: “For I do always those things that please him” (John 8:29). This would carry through to the last bitter cup He was asked to drink when, in Gethsemane, He prayed, “O my Father, if it be possible, let this cup pass from me: nevertheless not as I will, but as thou wilt” (Matthew 26:39).

“What seek ye?” Just recently, my five-year-old granddaughter Abigail taught me a beautifully simple and poignant lesson about answering this question. It was Christmas Eve. Abigail and her sister had prepared a nativity for the family. She assigned us all our parts: shepherds, wise men, the holy family. Which part do you think she wanted to play? Isn’t it usually Mary? Not this time. She wanted to be Jesus! There would be no doll in this nativity, but an actual child, innocent as was the infant she wanted to emulate. She wrapped herself up in a blanket for “swaddling clothes,” curled up as small as she could on a cushion, and was as contented as a child could be. She lay there very still, because, of course, the baby Jesus would not cry—but I did, and I have often wept again when the memory returns. “What seek ye?” I believe that somewhere in the many ways we answer that question throughout our lives is a constant ardent desire to “be Jesus,” not to just be like Him, to soak ourselves so fully in His life, thoughts, teachings, and attributes that we—as He invited us to do during His ministry—become one with Him as He is with the Father.

For me, life is not a test, but a journey toward a certain destination—so I’ll conclude these thoughts on this first, so-needful question of our Savior with an experience by Leo Tolstoy, the great Russian writer of War and Peace. He spent most of his life trying to answer Jesus’s question and created memorable characters in his books who also try to answer it. At one point in his life, he was in such despair about the purpose of living that suicide seemed a desirable option. He wrote A Confession, a story of his search for meaning, which included the following experience:

What happened to me was something like this: I was put into a boat (I do not remember when) and pushed off from an unknown shore, shown the direction of the opposite shore, had oars put into my unpracticed hands, and was left alone. I rowed as best I could and moved forward; but the further I advanced toward the middle of the stream the more rapid grew the current bearing me away from my goal and the more frequently did I encounter others, like myself, borne away by the stream. There were a few rowers who continued to row, there were others who had abandoned their oars; there were large boats and immense vessels full of people. Some struggled against the current, others yielded to it. And the further I went the more, seeing the progress down the current of all those who were adrift, I forgot the direction given me. In the very center of the stream, mid the crowd of boats and vessels which were being borne downstream, I quite lost my direction and abandoned my oars. Around me on all sides, with mirth and rejoicing, people with sails and oars were borne down the stream, assuring me and each other that no other direction was possible. And I believed them and floated with them. And I was carried far; so far that I heard the roar of the rapids in which I must be shattered, and I saw boats shattered in them. And I recollected myself. I was long unable to understand what had happened to me. I saw before me nothing but destruction, toward which I was rushing and which I feared. I saw no safety anywhere and did not know what to do; but looking back, I perceived innumerable boats which unceasingly and strenuously pushed across the stream, and I remembered the shore, the oars, and the direction, and began to pull back upwards against the stream and toward the shore.

That shore was God; that direction was tradition; the oars were the freedom given me to pull for the shore and unite with God. And so the force of life was renewed in me and I again began to live. . . . I returned to the belief in that Will which produced me and desires something of me. I returned to the belief that the chief and only aim of my life is to be better, i.e. to live in accord with that Will.2

So let us “come and see.” Let us “behold the man!” For in the life of this beautiful man we worship, and in those things He asks us, we will eventually find all we seek.

We often think of our relationship with God in terms of us being the questioner approaching the great Answerer. But what if He is actually the great Questioner, and we are intended to wrestle—not to receive the answers from Him, but to give them? Bestselling author S. Michael Wilcox teaches, "How we answer those questions tells our Father in Heaven much about us, as well as revealing ourselves to ourselves." Over time, Wilcox has also learned, "If I am the Answerer and God the Questioner and I can answer His questions with thought and devotion, then my own inquiries to Him are significantly diminished." As you explore these short yet profound questions, you'll learn more about the Savior and more about yourself, discovering personal answers along the way. What Seek Ye? is available now at DeseretBook.com.