Set to Frank Sinatra's enchanting "New York, New York," four movie-making and snowboarding enthusiasts created a video that has been creating quite the splash on YouTube and social media. After authorities warned locals to stay indoors because of a giant blizzard that would hit the east coast, Casey Neistat, Jesse Wellens, Dean Neistat, and Oscar Boyson decided to take advantage of the fine weather and go snowboarding and skiing in New York's typically crowded streets.

Pulled by a car, the four even make it to Times Square where, amidst the lights and advertisements, a message from the Church of Jesus Christ of Latter-day Saints can be seen, standing out brilliantly against the fallen snow. The message? "A Savior Is Born" and "Joy is born."

That was the very message and ad campaign that led the Church to crack the top ten list for viral videos during the holiday season, the only religious organization to do so.

Check it out for yourself: 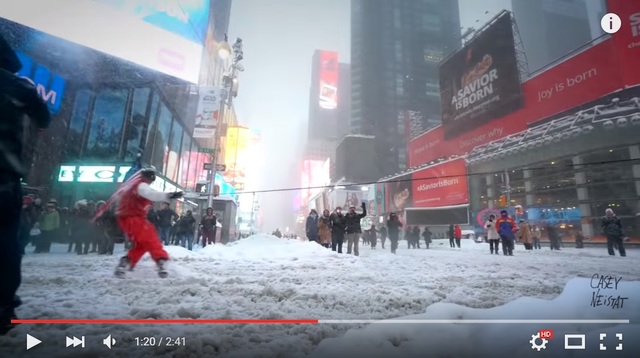 Warning: The video contains one moment of profanity, though very low and in the background. It may be best to play the video without noise.

Thanks to Mormon Soprano for making us aware of this amazing find!