Watch: Sister Nelson Shares How the Lord Brought Her and President Nelson Together Despite Difficulty

Learn more about how the Lord brought President and Sister Nelson together in this new Church News video:

Insights from a Prophet's Life: Russell M. Nelson shares more about how the Nelsons met and the challenges they overcame as a couple:

In the spring of 2005, Wendy Watson made a trip to southern Alberta to speak at a stake Relief Society conference in her hometown of Raymond, Alberta, Canada. One of her sisters, Kathy Card, from Edmonton, joined her. Following a session in the Cardston Alberta Temple, Wendy told her sister that she could feel a big change coming in her life but had no idea what it was. Maybe it was time to quit teaching at BYU. Maybe she should move. She just wasn’t sure. But as they talked, she found herself saying something she’d never said to anyone before in her life: “Kathy, you can write it in your journal. There is a big change coming in my life.”

The next morning, Wendy mentioned that she had awakened with a hymn in her mind and she didn’t know what it was. When she hummed it for Kathy, her sister said, “Oh, don’t you know, that’s the hymn that Elder Nelson wrote new words to and that the Mormon Tabernacle Choir sang to accompany his general conference talk.” Wendy responded, “Well, I don’t know anything about that, but there’s a big change coming in my life.”

A few weeks later, in May 2005, Wendy and her friend Sheri Dew left for Europe on a trip that was part business and part vacation. . . .

When the four arrived in Florence, they bumped into friends who happened to mention that the first stake in Rome was being created that very weekend by Elder Russell M. Nelson. They debated briefly about whether they should attempt to attend such an amazing historical event—the first stake in the shadow of the Vatican—but decided that a change in their itinerary at that point would cause a domino effect too major to overcome. . . . As Wendy and Sheri considered options, [however], they decided to see if they could get last-minute tickets on a train from Florence over the Italian Alps to Zurich. Surprisingly, tickets were available, so they hurriedly packed, caught a cab to the train station, bought their tickets, and walked to the large yard filled with trains.

As they perused a large marquee identifying which trains were going to which cities—all in Italian—they heard someone from behind them say, “Sister Dew, may I help you?” When they turned around, they saw an adorable young woman, a returned missionary who had returned to Florence, where she had served much of her mission. She helped them identify the train headed to Zurich and casually mentioned that she was off to Rome to attend the creation of the first stake there. Wendy then left to check out platform number 8, which was where their train to Zurich would be.

Suddenly Sheri had an idea. She was almost certain that Elder Harold G. Hillam, then the Area President, and his wife, Carol, would be accompanying Elder Nelson to Rome. She had worked closely with Elder Hillam during her service in the Relief Society General Presidency, and she asked the young woman if she would be willing to walk up to the stand and hand a note to Elder Hillam. Sheri adored the Hillams and loved the idea of sending them a note. The returned sister missionary was game, so Sheri quickly jotted a note and handed it to her.

As they prepared to part, it occurred to Sheri that it would only be polite to send a note to Elder Nelson as well, though she did not know him as well as she did Elder Hillam. As she began to write a second note, Wendy suddenly reappeared from checking out the various train platforms. Sheri explained the note she had written to the Hillams and said that she was just finishing a second note, this one for Elder Nelson. “Sign my name to it too,” Wendy said. Sheri signed both her and Wendy’s names, the young woman took the notes and departed, and Sheri and Wendy boarded the train for Zurich. They wondered out loud if the young woman would actually deliver the notes, but assumed they would never know.

However . . . they did find out that the young returned sister missionary did indeed deliver the notes to Elders Nelson and Hillam. And they found out in a most unexpected way.

Elder Nelson’s wife, Dantzel, had passed away several months earlier. Knowing that he would be traveling alone to and from Europe, he asked his secretary to go to Deseret Book and get him a couple of books to read on the trip. On the flight over, he read one of those books: Rock Solid Relationships, by Wendy L. Watson.

When he read the note while sitting on the stand in Rome prior to the beginning of the stake conference and saw Wendy’s name, it leaped off the page as all the other words faded away. He couldn’t see anything except the name Wendy Watson. At the same time, Elder Nelson had a strong, immediate, and clear spiritual impression about her. Once home from Europe, he took the note with him to the Salt Lake Temple to seek confirmation about that impression. What he learned was that when it was time for him to consider remarriage, he needed to meet this woman. . . .

It was a stunning display of timing—the Lord’s timing. And the rest, as they say, is history. The day came when Elder Nelson felt prompted to reach out to Wendy. As they became acquainted, it was clear that heaven was orchestrating their union. The Lord was their matchmaker, as Wendy would say ever after. . . .

On Thursday, April 6, 2006, President Gordon B. Hinckley performed the sealing of Elder Russell M. Nelson and Wendy L. Watson in the Salt Lake Temple. Following the sealing ceremony, the new Elder and Sister Nelson invited family and close friends to join them in an endowment session. Then, after a round of photographs, the new couple were off on their honeymoon. When they drove away, it was the first time they had been alone in a car together. “We were both excited, both scared, but both filled with faith,” Wendy remembered.

They would quickly learn that just because, or maybe precisely because, the Lord had orchestrated their courtship and sealing, it did not mean marriage would be easy for them at first. Wendy knew, both from her own life experiences and also from her professional involvement with many couples, that when the Lord makes it clear that a certain course of action is directed or even ordained by God, it likely means there will come a time when you absolutely need to know that the decision or direction you’ve taken was inspired by Him. 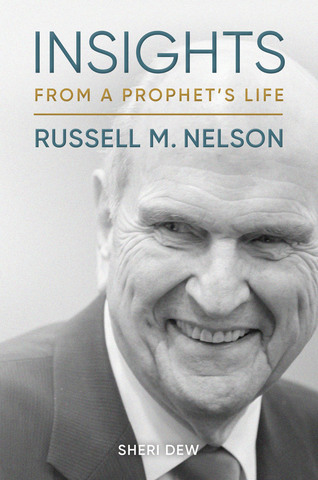 For more about President and Sister Nelson's relationship, check out Insights from a Prophet's Life: Russell M. Nelson.

What kind of life preparation does the Lord give the men He will one day call to be a prophet? And what are the lessons to be learned from such a life?