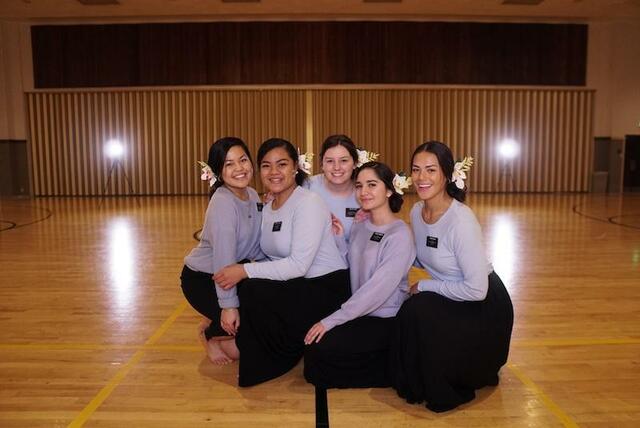 “Hula,” “missionary work,” and “Missouri” may be words that don’t typically go together, but for Sister Camacho from O’ahu, Hawaii, nothing could be more natural.

Originally called to serve in Brazil, Sister Camacho had been reassigned due to the pandemic to Independence, Missouri. She hadn’t been in her new mission for long when she learned that her trainer, Sister Tu’avao, had previously brought the elders and sisters in their mission together to perform a Tongan dance. Inspired by the idea, Sister Camacho wanted the opportunity to share her Hawaiian culture and her love for the Savior as well—through hula. 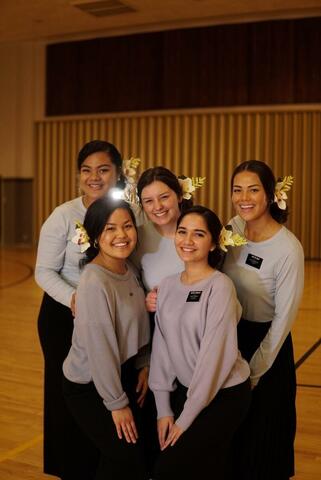 First, she needed music, and Sister Camacho thought the song “Halleluia” by Kuana Torres Kahele would be appropriate. While listeners may recognize the song—Leonard Cohen’s “Hallelujah” has the same melody—the meaning of the Hawaiian version is actually quite different, Sister Camacho explains, as it focuses on Jesus Christ.

She and another missionary, Sister Grace (also from Hawaii), started to choreograph the third and fourth verses of Kahele’s rendition, which is composed of lyrics such as “Give praise to the heavens / to the beautiful King Jehovah,” and “Jesus is the Christ / let us worship Him.” The movements of the hula also reflect the meaning of those lyrics.

“In the video, a lot of emotions that we put into the song are toward the heavens. They make the audience look up,” Sister Camacho says. “In that way, [we’re] praising Jesus Christ . . . the Light of the World.”

Other sister missionaries were recruited, and once they found matching outfits and created faux orchid hair pieces they were ready to go. Elder Stone, an elder in their mission with experience in videography, filmed the number, which was originally planned to be executed outside—but a snowfall made a change of plans necessary and they opted for a church building instead.

Only a few takes were necessary before everything was wrapped up, and the video was soon posted on Facebook in mid-January. Since then, it has been viewed over 1,100 times and has close to 250 comments. Many people expressed how the video moved them—one person even said that while he had not attended church for many years, the missionaries’ hula had inspired him to return. Another viewer also expressed her gratitude for the video, saying it was just what she needed that day.

“Sisters, you each dance with such grace and the Light of Christ. Beautiful! My mom danced and taught hula for many years in the Independence/KC area, including for church events and roadshows. She passed that love of hula and story on to my sister, and I was feeling quite low today because of missing her (she passed in November from a sudden stroke) and seeing your hula brought back such beautiful memories of her dancing, as well as her testimony of the Savior. Thank you for sharing your gifts with the world. We need you!!” she wrote.

► You may also like: Grif the Great: Remembering how 1 boy’s example of love and light brought joy to an island community

Not only have viewers been able to feel the Spirit as they’ve watched the video, but the sister missionaries felt it as they recorded the number, Sister Camacho says.

Sister Camacho added that this project has been an opportunity to preserve her Hawaiian culture, history, and language, and that sharing it with the world has been a blessing.

“I love hula, and it’s kind of like who I am. And it’s cool, because every missionary brings out something as they go out on their missions, right? And I feel like this is something that I brought out. I never would have thought that I’d be dancing hula in Independence, Missouri, but here we are. . . . You know, hula’s not only an expression, it’s also a history of the Hawaiian people. So [in] doing this, I was really appreciative of the sisters being willing to preserve that Hawaiian culture.” 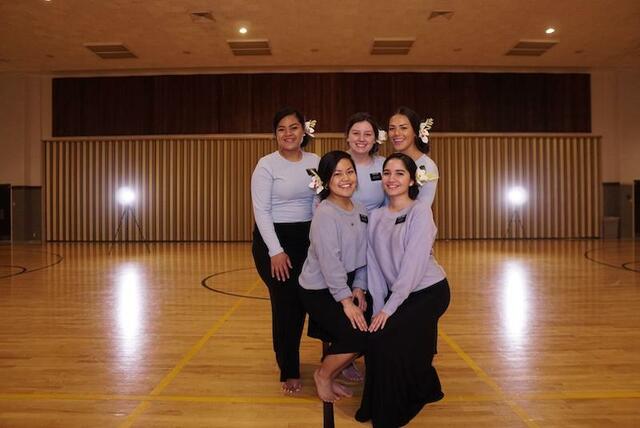 Though missionary work has had to adapt due to the pandemic, this video shows new ways that “the work is moving forward,” Sister Camacho says. She hopes that above all, the video will help others feel the light of Christ and that they will share their light with others.

“Jesus Christ is ultimately the source that we look to for light, and as missionaries [with our] hope in Christ, we strive to be more like Him. We strive to let His light shine through us so that even the people around us can feel of it and experience it. I hope that everyone that watches our video feels that there’s light through the mele—the song—our emotions, and expressions . . . and I hope that the Spirit that we felt while putting it together can be felt by the audience and that they, too, will want to share that light in their own unique way.”