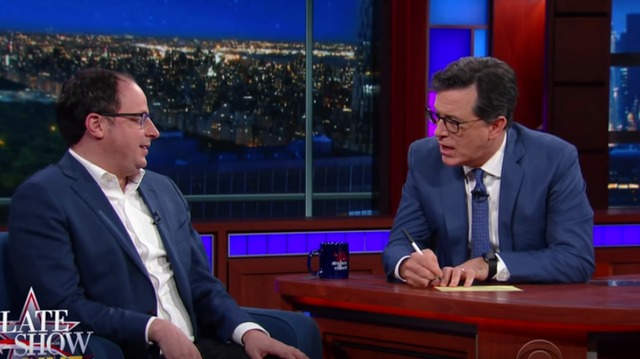 Watch: Stephen Colbert Shocked to Hear a Mormon Is Running for President

"Wow, you do a great Mitt Romney," Colbert tells the LDS former presidential candidate in the commercial.

After that brief encounter, Stephen Colbert probably thought his run-in with Mormon presidential candidates all but over, at least for this election.

So when told about a new LDS candidate who might actually take the state of Utah, Colbert could hardly believe it.

Nate Silver, a statistician with an incredible record for predicting presidents during elections based on poll results, came on the Late Show and told Colbert what he thought about the upcoming election.

When asked about the undecided voters and which candidate they might vote for, Silver says, "They are people who don't like either candidate. I mean, there's this guy named Evan McMullin in Utah, who is literally someone no one ever heard of, and he's now leading in some polls of Utah."

That's when Colbert stops him. "Wait, wait. So he's running for president in Utah?'

That's when Colbert breaks out his pen. "What's his name?" he asks while writing it down.

"Evan McMullin?" he continues, fascinated by this information. "So there's a guy I've never heard of who might win the electoral college vote in Utah?"

That's when Silver shares that this political underdog moved from 10 percent to 31 percent in the polls in the space of a week, meaning Evan McMullin could be the first independent presidential candidate to win electoral votes since 1968.

No wonder Stephen Colbert was surprised.