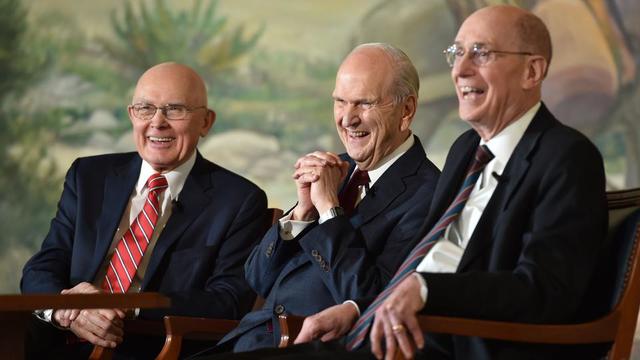 "If you think the Church has been fully restored, you're just seeing the beginning," President Russell M. Nelson said during his South American tour this year. This past year has demonstrated our Church is a living church—one that is continually evolving to help bring us closer to the Savior. And this is just the beginning. "Wait till next year, and then the next year," President Nelson said. "Eat your vitamin pills. Get some rest. It's going to be exciting."

Here are just a few ways the Church has changed in 2018.

"With tender feelings we announce that Thomas S. Monson, president and prophet of The Church of Jesus Christ of Latter-day Saints, died this evening at 10:01 pm in his home in Salt Lake City. He was with family at the time of his passing. He died at age 90 from causes incident to age."

► You'll also like: 14 Photos of President Monson That Will Make You Love Him Even More

After his passing, many around the world shared their love and respect for our beloved prophet, from the Quorum of the Twelve Apostles to presidents and news outlets to celebrities.

► You'll also like: 23 of Our Favorite Quotes from President Monson

2. We sustained a new First Presidency and two new apostles.

In his first message to members of the Church, President Russell M. Nelson announced President Dallin H. Oaks and President Henry B. Eyring as his counselors in the First Presidency. He then shared this uplifting message: "To each member of the Church I would say keep on the covenant path. . . . As a presidency, we want to begin with the end in mind." 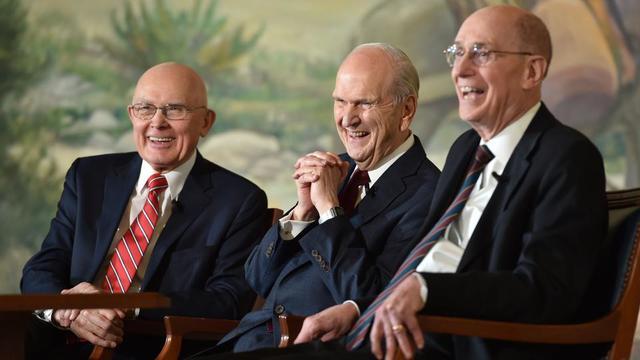 During general conference this April, we held a solemn assembly to sustain our new prophet and Church leaders, including two new apostles: Elder Gerrit W. Gong and Elder Ulisses Soares.

► You'll also like: 5 Things You Should Know About Our New Apostle Elder Soares

3. The Church changed the recommendation process for missionaries, how missionary calls are sent, and updated Preach My Gospel.

The Church made quite a few adjustments concerning missionaries over the past year, including updating the missionary handbook to improve safety measures for those serving, sending calls online instead of through the mail, updating the missionary tool Preach My Gospel to reflect changes in the Church, and changing the recommendation process for missionaries to expand opportunities for more young people to serve. As Newsroom announced: "Beginning January 2, 2019, all young men and women in the United States and Canada—including those who may not be able to serve a proselyting mission due to health reasons—will use the same online recommendation process. They will complete recommendation forms, participate in interviews with their local Church leaders and undergo evaluations by medical professionals. Candidates will then receive a call from the president of the Church to serve either a proselyting or service mission."

4. We no longer refer to ourselves as Mormons, and we use the Church's proper name.

"The Lord has impressed upon my mind the importance of the name He has revealed for His Church, even The Church of Jesus Christ of Latter-day Saints. We have work before us to bring ourselves in harmony with His will," President Nelson said. These changes include focusing more on our Savior, whose Church this is, by avoiding using "Mormon Church," "LDS Church," "Church of the Latter-day Saints," or the terms "Mormon" and "Mormonism."

"My family and I thank you for your love and your outreach of kindness after the passing of my wife Barbara. How grateful I am to know where my precious Barbara is and that we will be together again, with our family, for all eternity. . . .

"We . . . can be comforted and learn more about our own future when we and our loved ones die and go to the spirit world by studying this revelation and pondering its significance in the way we live our lives each day. May the peace of the Lord sustain us now and forever."

6. We are now ministering brothers and sisters, not home and visiting teachers.

In line with the "newer, holier approach" our prophet and Church leaders outlined for us in April general conference, we now focus more on caring, loving, and serving our fellow brothers and sisters and less on reports and checklists.

7. Elders quorums got a little bigger.

President Nelson announced during the Saturday priesthood session of April general conference that the high priests would meet with the elders in the elders quorum "to accomplish the work of the Lord more effectively." This change has helped create unity and learning opportunities for all involved.

8. President Nelson has toured the world meeting and teaching Latter-day Saints around the globe.

Our new prophet's travels have not ended with his global ministry tour that included eight countries visited in eleven days. Since then, he has continued to travel, hold firesides, and meet with Church members everywhere in venues from major league baseball fields to hockey stadiums and countries from South America to Asia.

The Church released the first new Church history book in nearly a century, Saints: The Story of the Church of Jesus Christ in the Latter Days. Unlike previous histories, this book brings the stories of past members to life with vivid storytelling that doesn't shy away from controversial Church topics. Both accessible and informative, the narrative-form book gives readers a look into the lives of the Saints who dedicated their hearts to establishing the Church and spreading the gospel throughout the world.

10. The Church changed our meeting schedule to focus on home-centered gospel study. 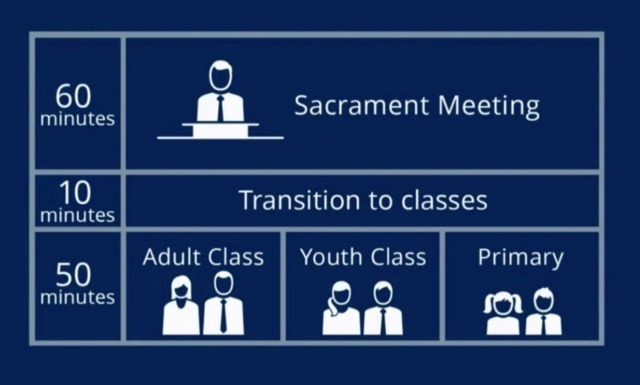 During the Saturday morning session of the 188th Semiannual General Conference of The Church of Jesus Christ of Latter-day Saints, the Church announced changes to weekly Church meetings, including that church meetings will now be two hours instead of three.

“As Latter-day Saints, we have become accustomed to thinking of ‘church’ as something that happens in our meetinghouses, supported by what happens at home,” President Nelson said. “We need an adjustment to this pattern. It is time for home-centered church, supported by what takes place inside our branch, ward, and stake buildings.” Because of this, the Church decided to make changes to "organizational structures that will fortify our members and their families."

11. We can all contribute to the Church's new hymnbook and children's songbook.

Over the next few years, the Church will be revising their current Hymns and Children's Songbook, and they've asked for us to contribute. Find out how you can submit a song of your own here.

"The Church of Jesus Christ of Latter-day Saints is growing across the earth. As this occurs, local Church leaders and members are encouraged to focus on gospel learning in their homes and to participate in Sabbath worship and the Church’s supporting programs for children, youth, individuals and families. The goal of every activity in the Church should be to increase faith in the Lord Jesus Christ and to share His gospel message throughout the world," a statement from the Church's newsroom stated. Because of this, the Church began reexamining some of its sponsored pageants and held discussions with local Church and community leaders to decide the best way to move forward. In the end, the Church announced:

13. The Mormon Tabernacle Choir got a new name.

Following President Nelson's request that members use the full name of The Church of Jesus Christ of Latter-day Saints and refrain from using the term "Mormon," the historic Mormon Tabernacle Choir changed its name to the Tabernacle Choir at Temple Square.

About this name change, Ron Jarrett, president of the choir, said, "The name may change, but everything that people know and love about the choir will not only be the same but will get better and better."

In a letter to the Church, the First President stated that "Bishops have a sacred responsibility to lead, teach, and inspire youth. Effective personal interviews are one important way they do this. These interviews provide opportunities to help youth become disciples of the Savior, repent of transgressions, and live the gospel of Jesus Christ." The letter continues, "To help ensure that youth and parents are aware of the topics and questions covered in these interviews, the bishop should share the enclosed guidelines with them before the first interview."

15. We have new resources to study Primary and Sunday School lessons at home.

The curriculum of the Church is changing.

“Programs of the Church are home-centered and Church-sponsored,” said Mike Magelby, director of the curriculum for the Church. “Your study starts at home. You will get the doctrine and learn things from the home manual.”

Brian J. Hansbrow, a curriculum developer for the Church, added, “[Research has] found that scripture study in the home—personal religious devotion—had a greater impact on conversion than anything else." And the Church is utilizing that information to strengthen how we learn and teach the gospel.

16. Youth can advance to Young Men and Young Women classes and begin attending the temple the year they turn 12.

In a letter released December 14, 2018, the First Presidency announced:

17. We have 14 new general board members on the Relief Society, Young Women, and Primary boards.

18. We have new resources for preventing suicide and for families impacted by suicide.

In addition to asking the Church membership to join in prayers and making a historic donation to an LGBTQ support group for suicide prevention, the Church released a powerful new video series and provided new resources to help others feel loved, receive needed help, and to combat the rising suicide rates.

19. The Church has now teamed up with the NAACP to change the world for the better. 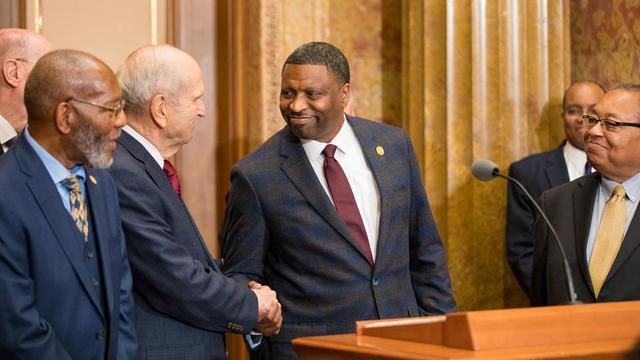 For the first time, members of the First Presidency and leaders of the National Association for the Advancement of Colored People (NAACP) met together in a historic meeting to learn how they could unite in their shared causes. Leon W. Russell, chairman of the NAACP Board of Directors, called the meeting between the NAACP and the Church "God-assisted." "No matter what your belief is, sometimes you have to believe there is some direction coming. I believe that spiritually this was directed. It was meant to be, purposeful, and intended," he said. "It was mutual, let's say God-assisted, work. It so happened we were looking for ways to reach out, they were looking for ways to reach out, and we got connected, and so here we are."

20. The Church announced a new initiative for children and youth.

Set to roll out in January 2020, Newsroom said about this new initiative: "For years, Church leaders have been preparing a new initiative to teach and provide leadership and development opportunities to all children and youth, to support families and to strengthen youth everywhere as they develop faith in the Lord and Savior, Jesus Christ. This new approach is intended to help all girls and boys, young women and young men discover their eternal identity, build character and resilience, develop life skills and fulfill their divine roles as daughters and sons of God."

21. We're looking forward to the dedication of our 200th temple. 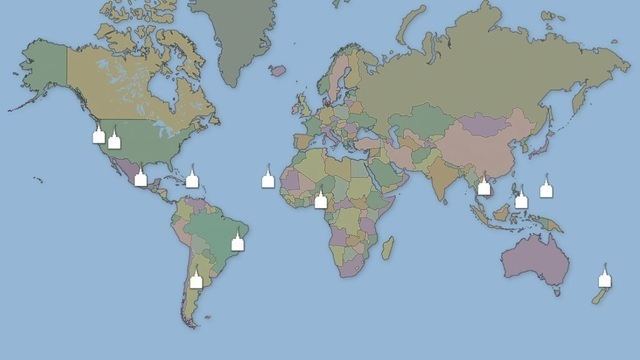 22. We celebrated the 40th anniversary of the priesthood revelation with an unprecedented event. 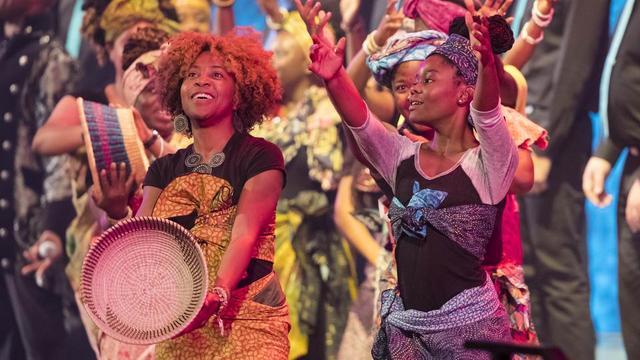 The "Be One" celebration featured a message from the First Presidency, stories of faith from Church member across the globe, and music from Gladys Knight, Alex Boyé, the Bonnor family, the Unity Gospel Choir International, and members of the Tabernacle Choir. It was a beautiful commemoration of people all over the world who were blessed by the declaration that worthy black men in the Church could begin to hold the priesthood.

23. We are less distracted by social media at church.

In order to help enhance Latter-day Saints' worship experience, many social media sites were no longer available in church meetinghouses beginning May 2018.

We can't wait to see what changes next year brings!