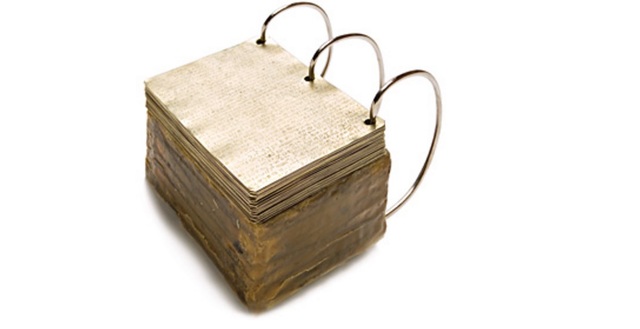 Were the Gold Plates Actually Made of Pure Gold?

The following is an excerpt from a New Era article, "What Did the Plates Look Like?"

What Were the Plates Made Of?

Neither Joseph nor any of the witnesses said that the ancient record was made from solid gold. Nor did they use the term “gold plates” or “plates of gold.” All Joseph said is that they had “the appearance of gold.”

The presumption that the plates were made of solid gold is curious but probably not correct. It was Joseph’s enemies that coined the phrase “GoldBible.” It is more appropriate to refer to the ancient metal record as “the Golden Plates,” referring to their color, not the material they were made of.

The Golden Plates Couldn’t Be Made of Pure Gold

Many critics have been quick to point out that if the record was made of solid gold it would have weighed much more than a person could lift. Besides being too heavy, thin plates of pure gold would not function well as a book. The metal would be so soft that it could easily tear from the rings, and engraving would be limited to one side.

The text of the Book of Mormon itself refers to Nephi’s seeking “ore” from which to make his plates. Metal ore usually has a mixture of various metals in it. Gold and silver are often mixed together in an alloy called electrum. Logically, the Book of Mormon plates could have been composed of these two metals. Some have suggested a combination of copper and gold.

The Lord promised that the plates would preserve their “brightness”(see Alma 37:5–7). Because gold does not corrode, objects made of gold can last thousands of years. When exposed to oxygen, silver tarnishes until it turns black. Copper turns a green color. Ancient American metallurgists familiar with this process were able to accelerate the oxidation of silver and copper and remove its residue, leaving an enhanced gold surface. Thus, a composite metal could be made to have the appearance of solid gold. (For details, see “How Witnesses Described the ‘Gold Plates,’” Journal of Book of Mormon Studies, vol. 10, no.1 [2001], 21).

Read the rest of this story at www.lds.org/new-era