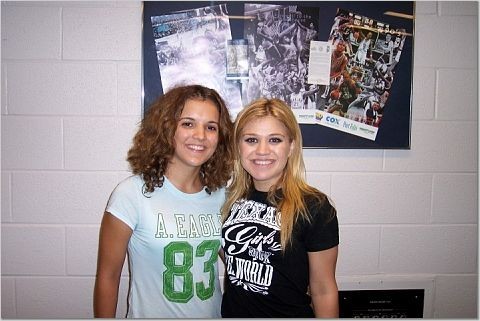 What I Learned After Giving Kelly Clarkson a Book of Mormon

I fell in love with Kelly Clarkson’s voice as a 13-year-old little girl watching American Idol. I’ll shamelessly admit that I still, nearly 16 years later, get teary-eyed each time I see the clip of her singing “A Moment Like This” after being named the reality show’s inaugural winner.

While I could submit a wide array of YouTube videos as evidence that Clarkson can literally sing anything and make it sound good, it was an interaction with the singer 13 years ago that has made me a Kelly Clarkson fan all of these years.

When I was 16 years old my parents bought me tickets to see Clarkson live at Old Dominion University in Norfolk, Virginia. I was lucky enough to score backstage passes to the show and couldn’t wait to meet Kelly after watching countless interviews and performances (judge me, I’m judging myself while writing this). I found out by reading others’ experiences online that fans often bring gifts to celebrities at meet and greets.

“What do you give someone who could literally buy anything they wanted?” I remember asking myself.

Then, I remembered an interview I had seen where Clarkson said that she really enjoyed reading books about different religions.

As a member of The Church of Jesus Christ of Latter-day Saints, I grew up reading the Book of Mormon every day. In fact, that year I woke up at 6:45 a.m. to study the book in my early morning seminary class.

While I didn’t understand everything in the book, I knew that it had helped me in my life and I remember thinking that if it had helped me, maybe it could help Kelly, too. I felt like it was really the only thing I could offer her that she might not be able to get on her own. So I wrote my little teenage testimony on the inside cover and wrapped it in tissue paper.

After enjoying the concert with my family, I went to a hallway where I waited in line with dozens of other people to meet Kelly. The people online were right. Everyone brought gifts. The guy in front of me gave her an Easy-Bake Oven.

As I sat and waited, I began talking to a girl behind me. She was from Las Vegas and told me that a friend had surprised her with backstage passes. She was a Kelly fan but not a fanatic like some others in line. She asked me what my wrapped gift was and I told her it was a religious book. I enjoyed talking to her and before I knew it, my turn came.

I will love Kelly Clarkson forever because she could’ve reacted in a million different ways to being given a Book of Mormon, and in truth, she probably thought my gift was incredibly weird. But she couldn’t have been nicer, and maybe that’s why I still love her to this day. She immediately told me that one of her best friends growing up was Mormon and then began to ask me questions about what I believed. She asked me about the book and about LDS temples. It’s at this point that my memory of the experience goes blank. I was so nervous there is no telling what I said, but I will always remember how kind and gracious she was.

My family stood waiting for me outside the room, and as I stood telling them about my experience meeting Kelly, the friend I had met in line came out. She came running up to me with tears streaming down her face. I was a bit caught off-guard. I would’ve expected an emotional response from a few others in the line but not her. But then she explained that her tears were not the result of meeting Kelly.

“I’m Mormon,” she said as she hugged me. “I never would’ve thought to give her that, but thank you.”

I’ve wondered for the last 12 years what Kelly did with the Book of Mormon. She may have immediately disposed of it. It may be sitting in storage somewhere or on a shelf gathering dust.

I hang on to hope that one day she’ll pick it up and begin to read. Maybe, just maybe, she’ll read a verse that she likes or feel something and she’ll keep reading.

But even if her copy is long gone, I know there is always a reason that we feel prompted to share the things we hold dear. Maybe it’s just for our own personal development, to help us feel in our hearts that we really do believe, or maybe it’s for the girl behind us in line.