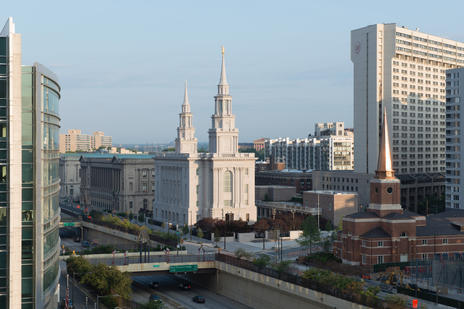 The Free Library of Philadelphia is opening a new exhibit in honor of the Philadelphia Pennsylvania Temple. Called An American-born Faith: Writings from the First Century of Mormonism, the exhibit will include an 1855 Book of Mormon written in Hawaiian, early copies of the Book of Mormon, and a phonetic alphabet, or "Mormon alphabet," written for non-English speaking converts.

This week, the doors of the new Philadelphia Pennsylvania Temple were opened to the public for the first time. The open house has attracted the attention of national news outlets, including the Huffington Post and Washington Post. The various articles that have been written about the temple by local and national news outlets have focused on the temple’s tribute to history.

Washington Post’s Julie Zauzmer spoke with several missionaries currently serving in Philadelphia during her time at the open house. . . .

Thom Nickels, a Philadelphia-based journalist for the Huffington Post, wrote at length about his experience during the temple media tour. He recalled his previous experiences with the LDS Church, from having Mormon neighbors as a teenager to visiting the Mormon Pavilion at the New York World’s Fair.