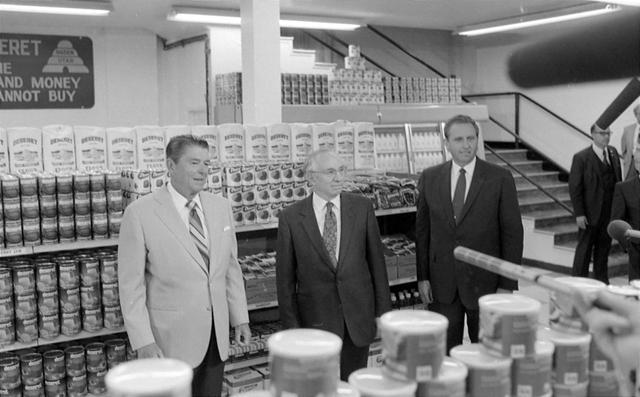 What President Reagan Had to Say About Mormons

"From his days as governor of California, the doctrines and the principles of the Church drew his frequent interest. As president, he often asked about Church programs. He recognized the Church's moral leadership and social influence, even declaring, 'A Mormon contribution to American life is beyond measuring.'"

President Reagan also noted that what makes the Church's welfare system so successful and unique is that it focuses on helping the needy not only provide for their immediate needs, but it gives them the experience, satisfaction, and opportunity to become self-sufficient.

Aside from the Church's welfare services, President Reagan also praised another icon of the LDS Church: the Mormon Tabernacle Choir. Reagan was the first president to term the choir "America's Choir."

“At my first inauguration as president of the United States, I wanted very much to reignite the fires of liberty and re-inspire the American spirit. And no one sings the anthems of America quite like the Mormon Tabernacle Choir,” President Reagan said.

“The Choir’s singing was a highlight of our inauguration, as we knew it would be. I’m sure I speak for all Americans when I say thank you for saying so well what all of us feel about this land of the free and home of the brave. There is no more inspirational moment for any American—and that includes Ronald Reagan—than to hear the Mormon Tabernacle Choir sing ‘Glory, glory, hallelujah, His truth is marching on.’”