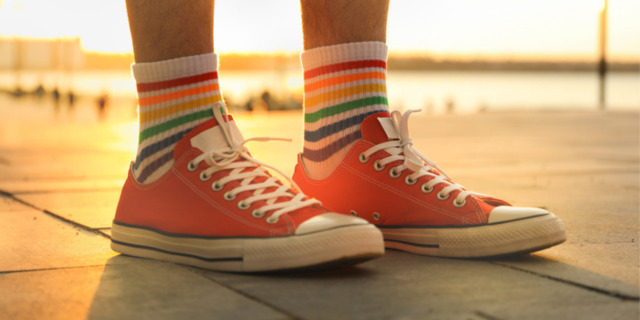 What does it mean to walk in someone’s shoes? Gay Latter-day Saint shares his perspective

byBen Schilaty, excerpted from “A Walk in My Shoes: Questions I'm Often Asked as a Gay Latter-day Saint” | Jun. 29, 2021

In 2014, I returned to Tucson after spending weeks at my parents’ house trying to figure out how to move forward. I had few answers, but one thing I knew was that I needed to stop hiding. I had decided not to force my experiences on anyone, but to be honest with people when my orientation came up organically. Dianna and I had carpooled to a young single adult activity on Mt. Lemmon, just north of Tucson, and as the two of us drove down the mountain I felt a prompting to come out to her. I mentioned our friend Laura whose nickname is Fun Laura. Dianna asked, “Does Fun Laura have a nickname for you?”

I replied, “Yep, she calls me Gay Mormon Ben,” to which Dianna responded, “Why does she call you that?” and I said, “Because I am both of those things.” Dianna seemed a little stunned by this revelation. I had wanted to tell Dianna I was gay for a long time, and I was glad to finally tell her. She was mostly cool about it, but she lamented that she’d had a crush on me and that she always has crushes on gay guys. I was a little bummed that her initial reaction was to focus on her poor crush choices instead of focusing on me and on our friendship.

Dianna had never had a gay friend before, and she didn’t really know what to say at first. I tried to have a conversation about my orientation as we drove, but she didn’t seem interested right then. So I just put on some music and we sang songs for the rest of the drive. I brought it up again a few days later, but she really didn’t know what to say or how to address the topic. Not long after that, the two of us took the two-hour drive to the Mesa Arizona Temple together. On the drive up, she asked me a question about being gay and that shattered the barrier that had kept us from really talking. We chatted about my experiences the rest of the drive. When we got back in the car, she said she’d been thinking about me the entire time we were in the temple and she had a lot of questions. We talked about faith and sexual orientation for the entire drive home. From that day on, Dianna was committed to being with me on my journey. I had wanted to have this discussion weeks earlier, but Dianna wasn’t ready. And that was okay. I have learned that just like it took me years to be ready to explore this reality in my own life, I need to be patient with others and give them time to process their feelings as well.

Six months later, I decided to attend a conference for gay Latter-day Saints in Mesa. I had just barely come out on my blog, and I only had a handful of gay friends. Stepping into the LGBTQ world was terrifying. I wanted to go to the conference, but I didn’t want to go alone. I told Dianna I was going, and before I could invite her, she said, “I want to go. Can I go with you?” I wanted to reach out and hug her in that moment for anticipating my need (but I didn’t because she’s not a huge hugger). Her offer to spend a Saturday with me at a conference was such a gift. While we were at the conference listening to gay Latter-day Saints share their journeys, she would lean over to me and ask, “Did you feel like that?” and I’d say, “Oh, yeah.” A few minutes later: “Can you relate to what he’s saying?” “For sure.” She was walking in my shoes.

When we got in the car, I asked her what she had thought about the conference. She said she needed some time to collect her thoughts. As we sat in the Cafe Rio parking lot a little later, I asked her again. She started to cry. It was one of those rare times when instead of making me feel awkward, the tears felt like a gift. She said that she loves the Church and its doctrines and that she supports our leaders who teach us of the eternal importance of marriage between a man and a woman. She also said that she cares about me and just wishes that I could marry who I want to marry. I wasn’t asking Dianna to support same-sex marriage. I wasn’t expecting her to change any of her beliefs. I wasn’t even asking her to walk in my shoes. All I wanted that day was to not be alone. But she did walk in my shoes, and it expanded her heart.

When I decided to start a support group for LGBTQ Latter-day Saints in Tucson, I didn’t even need to ask Dianna if she would be involved. I knew that she would be an ally. She was there at the first meeting when it was just me and two other LGBTQ folks. As the group grew, my house and Dianna’s house became LGBTQ Latter-day Saint central in Tucson. People from the group were always hanging out at Dianna’s, and she hosted numerous Ally Nights. She was always willing to open her home to the people who needed a place (unless it was late, of course, because Dianna needs her sleep). She often jokingly lamented that her house was always full of boys, but none of them were straight.

► You may also like: Ben Schilaty: Why I chose to stay at BYU and help LGBTQ students as an Honor Code administrator

Dianna has been an amazing ally as she has supported her LGBTQ friends and helped other people to understand. A month after I moved away from Tucson, Dianna posted the following on the Tucson LGBTQ group Facebook page: “In Relief Society today we had to stand up, say our name, where we’re from, and something interesting about us. I took that opportunity to say I’m an ally and anyone can reach out and talk to me. I hope that helps at least one person in the future.” I wonder what Dianna from 2014 would think of Dianna now. I bet she never anticipated her life being so full of LGBTQ Latter-day Saints, but that’s what happened. Dianna is as committed to The Church of Jesus Christ of Latter-day Saints as anyone I know. I believe that it is because of her commitment to the restored gospel that when she heard the knock at the door, she answered it. And then she helped others see what she had seen. Her faith compelled her to reach out in love and invite others in.

Just like Dianna, many people have answered my knocking and have tried to understand me and my life. Walking in my shoes has led a number of my friends and loved ones to apologize for things they said or did in the past. Usually I don’t remember the thing that they’re apologizing for, but they remember and feel compelled to tell me they’re sorry. Even though the individual apologies have rarely been necessary, the collective amount of them has lifted a weight from me, because I can envision a day when we will no longer say hurtful things to each other. Now when I see someone say or do something that could warrant an “I’m sorry for what I said,” I think, When they know better, they’ll do better. This is not to excuse people who are intentionally hurtful, but to acknowledge that we are all on a journey and I want to offer grace to others who, just like me, are still far from perfection. I’m happy to forgive anyone who wants to be forgiven.

There are people knocking right now, and not just LGBTQ people. People who are married or single. People with children and people without children. People who are overwhelmed with all they have to do and people who are at home alone wishing they had more to do. People who have doubts about their beliefs. People of different ethnic backgrounds and cultures. So many people who just want to be heard and understood. If we are to build Zion, we must create a place where hearts and minds come together and where everyone belongs. This happens as we respond to the knocking we hear, as we throw open the door and welcome people in.

A Walk in My Shoes: Questions I’m Often Asked as a Gay Latter-day Saint invites readers to act upon that counsel by following the journey of Ben Schilaty, a licensed therapist and BYU Honor Code administrator, as he works to reconcile his faith with his sexual orientation. Each chapter in the book focuses on a question that the author is often asked which he answers using stories from his life and gospel principles. Questions include: Were you born gay? Why do you stay in the Church? Why don’t you marry a woman if marriage is about more than sex? Readers are invited to experience various steps of Ben’s journey with him. A Walk in My Shoes allows readers a glimpse into the life of a single, gay, active Latter-day Saint and provides examples of how they can support and minister to their LGBTQ loved ones. Available now in Deseret Book stores and at DeseretBook.com.