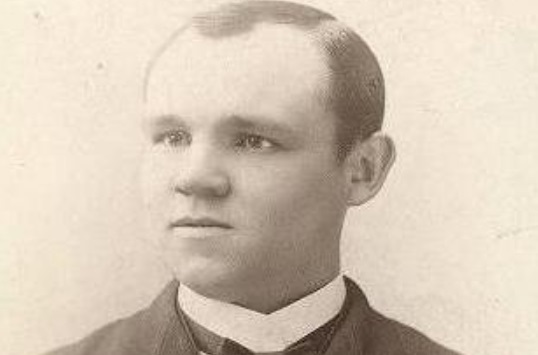 When James E. Talmage Blinded His Brother in a Terrible Accident (+ How It Brought Them Both Closer to God)

The following is an excerpt from the book And Now You Know: The Rest of the Story from the Lives of Well-Known Latter-Day Saints.

When he was 15 years old, a thoughtful young man recorded a tragic accident in which he was involved four years earlier:

“On October 10, 1873, while working after nightfall—a very dark night—a fearful accident occurred. My brother Albert, then about six years of age, came quietly towards me as I was still working with a digging fork in my hands; he gave no notice of his approach and until he screamed I had not an idea he was near me; then to my horror I discovered that while in the act of pitching with the fork I had struck him with the tool, one grain piercing the ball of his left eye. This organ was finally entirely removed, though not before the right eye had become sympathetically affected and he was almost entirely blind, being only enabled to distinguish very bright colors, and then only when within a few inches of the eye…. I need say nothing in regard to my feelings and reflections at this mishap; but that my relief lies in the promise pronounced on him by the priesthood of God that he shall recover.”

The brothers were third-generation members of Church because their grandfather and father had both converted to Mormonism. Three years after the accident, the family gathered to Zion, settling in Provo, Utah. At that time, schools for the blind were rare and had not been established anywhere in the state, but Albert obtained 15 or 20 books in line-letter and taught himself how to read. Many years later, a school for the blind was founded in Ogden, and at 30 years of age, Albert became one of the first students. There he met and fell in love with Sarah Whalen, a teacher at the school. They were married in the Salt Lake Temple a few days before Christmas in 1905.

Rather than having his sight restored, Albert's blessing was to bless the lives of other blind individuals. At Brigham Young Academy he studied various occupations for the blind, such as hammock making, chair caning, reed weaving, and basket making. He also became an expert typist. He then returned to teach at the Odgen school for the blind. During this time, he was continually thinking of ways he could help blind members of the Church, who had virtually no access to the vast storehouse of printed Church literature. Albert and Sarah visited blind people throughout Utah and taught many of them to read Braille.

In 1903, with the help of Weber Stake Academy president David O. McKay, Albert spearheaded an effort to raise $700—an enormous sum at the time—purchase a press, and begin printing reading material for the blind. A year later, under the direction of Church president Joseph F. Smith, Albert helped found the Society for Aid of the Sightless, serving as manager with his wife, Sarah, as secretary. Together, they began printing missionary tracts and other Church literature in Braille, making them available to both Church members and investigators for the first time. . . .

In 1912, Albert and Sarah began publishing The Messenger to the Sightless, a Braille magazine containing Church literature and doctrine, articles, poems, general conference addresses, and other items of interest. It was sent free of charge to blind people throughout the world. Albert ran the press from his home and published The Messenger to the Sightless every month for more than 40 years—an incredible length of time—until his retirement in 1953 at the age of 86. His wife, Sarah, was his partner in this effort until she died in 1942.

The older brother was devastated by the accident that took Albert's sight, and his biographer speculated that it possibly accounted for his “deep, almost fanatical dedication to work, to Church duties and to all the serious adult responsibilities” that marked his life from that time forward. But the Lord had a plan for this sorrowful young man. In 1911, at the age of 49, he was called to the Quorum of the Twelve. . . .

On 20 February, not long after celebrating his election to the Provo City Council, James was pouring molten slag into a mold when some of the molten material exploded and penetrated his left eye. He immediately obtained what first aid he could and had both eyes bandaged. Then, despite intense, searing pain, he attended a city council meeting as a blind man and was sworn to his new position as councilman on the very evening of the accident.

For weeks, James endured continual pain and an uncertain future, his worries no doubt compounded by haunting memories of the accident involving his brother Albert. He moved from his bachelor apartment into the home of Sister Josiah Cluff, who cared for him during this period. Fortunately, with the aid of regular medical treatment and priesthood blessings, his sight returned in full by the early part of March. . . .

James served as president of the Society for Aid of the Sightless and (probably accompanied by Albert) met Helen Keller when she came to Salt Lake City. Inspired by her example, the two brothers worked hand-in-hand to improve the quality of life for blind members of the Church. After his call to the Twelve, James spoke at a conference in Cache Valley, Utah. After the meeting, a blind woman introduced herself and said that she wished very much to read The Messenger to the Sightless but lacked the keen sense of touch required to read Braille. When James reported this conversation to his brother, Albert sent the woman Braille lessons that used extra large dots, enabling her to learn Braille and soon read the magazine.

Read more incredible stories in And Now You Know: The Rest of the Story from the Lives of Well-Known Latter-Day Saints.

And Now You Know presents fifty behind-the-scenes stories of prominent Church members you only thought you knew.

In this rare collection, author Larry E. Morris reveals startling true experiences in a 'rest-of-the-story' format that will keep you guessing as each tale unfolds. Who was responsible for the tragic accident that caused his younger brother's blindness? Which general Relief Society president endured the loss of her eldest son in a violent Indian attack? Who tenderly cared for her deaf sister during the last twenty-five years of her life while shouldering enormous responsibilities as the wife of a Church president?

Each story recalls a forgotten fact from Church history and provides a lesson in faith, courage, and determination.

Well documented and presented, And Now You Know opens little-known corners of the past, providing an interesting and personal look at experiences of prominent members of The Church of Jesus Christ of Latter-day Saints.