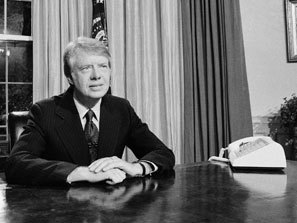 When President Jimmy Carter Offered a Prayer in the Tabernacle

Utah has hosted a variety of presidents from President Ulysses S. Grant to President John F. Kennedy. But there is one president in particular who made a lasting impression on the people of Utah for sharing his faith values while serving our country.

President Jimmy Carter is known these days for his Sunday School class, one in which the president himself sometimes teaches religious lessons.

And that’s exactly what he brought to Salt Lake City when he visited as president in 1978. According to KSL, Carter spoke at the Salt Lake Tabernacle about family. He then came back to Utah a few times after his presidency, visited Temple Square, and offered book signings.

When he visited Salt Lake City, he met with President Spencer W. Kimball of The Church of Jesus Christ of Latter-day Saints, and he gave the closing prayer at the Family Week program at the tabernacle, which occurred in November 1978.