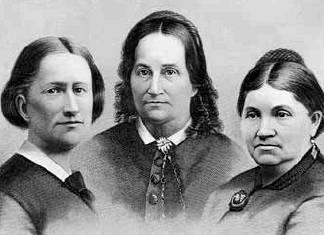 Who Were the First Women Pioneers in the Salt Lake Valley?

Following a long winter and spring in Winter Quarters — where 700 homes had been built and the camp of 12,000 members of The Church of Jesus Christ of Latter-day Saints divided into 22 wards — the first company was readied to make the journey. Some of the most seasoned and reliable brethren were selected, and at first the 148 in number were to be men only.

But Brigham gave way to entreaties, especially those of his brother Lorenzo, who wished his unwell, asthmatic wife, Harriet, to be allowed to accompany him. Eventually, it was decided that she and her two sons could join the group, as well as Brigham’s wife, Clara Decker (who was Harriet’s daughter by her first marriage), and Ellen Sanders, one of Heber C. Kimball’s wives (see "Brigham Young: An Inspiring Personal Biography" by Susan Evans McCloud).

Surely their presence made a difference to the men.