Why Does God Sometimes Allow His Saints to Be Martyred

"For behold the Lord receiveth them up unto himself, in glory; and he doth suffer that they may do this thing … that the judgments which he shall exercise upon them in his wrath may be just."
Alma 14:11

On June 27, 1844, an angry mob stormed into Carthage jail and murdered Joseph Smith and his brother Hyrum [1]. This event was deeply shocking to the early Latter-day Saints. “In the days, weeks, and months following the martyrdom,” explained Jeffrey Mahas, “the Saints grappled with how to describe their reactions to the deaths [2]." According to historian Richard Bushman, they “scarcely knew how to react to [such] hatred and violence [3]."

Joseph and Hyrum themselves, on the other hand, seemed to sense the brutal outcome that awaited them. In their final hours, they sought to understand the purpose of their “imminent martyrdom” by turning to Ether 12:37–38 in the Book of Mormon [4]. According to Elder Jeffery R. Holland, “Hyrum turned down the corner of the page from which he had read, marking it as part of the everlasting testimony for which these two brothers were about to die [5]."

Several stories in the Book of Mormon can help explain why God sometimes allows His righteous followers to suffer martyrdom. Abinadi was the first Nephite prophet, “of whom we have record, to die as a martyr [6]." For preaching the Lord’s message to the people, Abinadi was tortured with burning faggots [7]. In his last moments before death, he cursed King Noah and his priests with a fate similar to his own [8]. He then declared, “Thus God executeth vengeance upon those that destroy his people” (Mosiah 17:19). Mormon described Abinadi as “having been put to death because he would not deny the commandments of God, having sealed the truth of his words by his death” (v. 20) [9].

In another story, the Anti-Nephi-Lehies buried their swords as a covenant that they would never “use weapons again for the shedding of man’s blood” (Alma 24:18) [10]. As part of this covenant ceremony, their king declared that “if our brethren destroy us, behold, we shall go to our God and shall be saved” (v. 16). Tragically, a group of wicked Lamanites did attack, and “without meeting any resistance, they did slay a thousand and five of them” (v. 22). However, because they faced no resistance, their Lamanite aggressors took pity on them and threw down their own weapons of war. In the end, “the people of God were joined that day by more than the number who had been slain” (v. 26) [11]. 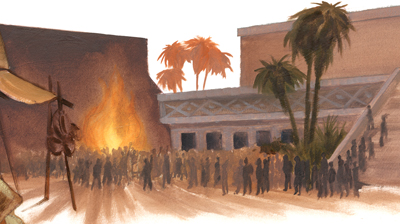 In perhaps the most tragic episode of Book of Mormon martyrdom, the men of Ammonihah, who believed in the teachings of Alma and Amulek, were expelled from their city. Then at “the place of martyrdom” their wives, children, and holy scriptures were cast into a fire (Alma 14:9). “And when Amulek saw the pains of the women and children who were consuming in the fire, he also was pained; and he said unto Alma: How can we witness this awful scene?” (v. 10). Amulek wanted to use the power of God to save the women and children, but Alma declared,

The Spirit constraineth me that I must not stretch forth mine hand; for behold the Lord receiveth them up unto himself, in glory; and he doth suffer that they may do this thing, or that the people may do this thing unto them, according to the hardness of their hearts, that the judgments which he shall exercise upon them in his wrath may be just; and the blood of the innocent shall stand as a witness against them, yea, and cry mightily against them at the last day. (Alma 14:11) [12].

In the story of Alma and Amulek, in particular, we are able to see the confusion that so often accompanies the friends and families of those who have been persecuted or slain for their beliefs [13]. “How is it possible,” asked Charles Swift, “that [Alma and Amulek] can simply stand there and watch these innocent people die, especially since they are dying because they believed in their words [14]?" Alma’s inspired answer: so that (1) God’s judgments may be just and (2) the innocent can stand as witnesses against the wicked.

In each of these Book of Mormon stories, it is stated or implied that Salvation would be given to those who willingly suffered martyrdom for their beliefs [15]. It is also apparent that God’s purposes were further accomplished through the courageous actions of these martyrs. Abinadi’s message ended up leading to the establishment of Christ’s church among the Nephites [16]. The Anti-Nephi-Lehies helped save more Lamanites than were martyred, and their faithful sons repeatedly helped deliver the people of Nephi during a great war with the Lamanites [17]. The ministry of Alma and Amulek led to the complete desolation of Ammonihah, which fulfilled the Lord’s law against apostate cities [18].

Elder Dallin H. Oaks has explained that “God rarely infringes on the agency of any of His children by intervening against some for the relief of others.”

Unfortunately, instances of religious persecution and even martyrdom are increasing in today’s world [20]. As noted by David Marsh, “Modern technology allows us to witness the suffering and death of people all over the world. As we weep over the innocent and the righteous who are caught in destructive and deadly forces of war, violence, and natural disasters, perhaps we can appreciate even more the divine perspective the Lord provides in the Book of Mormon [21]."

No other book of scripture so adequately and deeply explains God’s underlying purposes for mortality [22], including the suffering and persecution that help provide “opposition in all things” (2 Nephi 2:11) [23]. Like Joseph and Hyrum Smith, we too can find comfort, purpose, and understanding in the pages of the Book of Mormon—a book for which they willingly sacrificed their lives [24].

Jeffrey Mahas, “Remembering the Martyrdom,” Revelations in Context: The Stories Behind the Sections of the Doctrine and Covenants (Salt Lake City, UT: The Church of Jesus Christ of Latter-day Saints, 2016), online at lds.org.