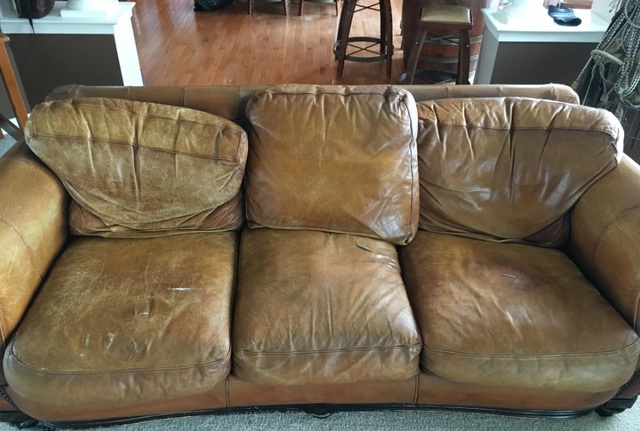 My editors say I often bury the lede in my columns.

Fine, here you go. The couch in my living room should be labeled a health hazard and sent to Area 51 for testing.

If the couch in my living room was being chosen for a furniture kickball team, it would be picked last.

If the couch in my living room was dissected and samples sent to the Center for Disease Control in Atlanta, the governor of Georgia would declare a state of emergency.

If the couch in my living room starred as the evil monster in a horror movie, it would rise again during the credits and eat a family of four on the front row.

A few weeks ago I noticed that a visitor in our home could not stop staring. He couldn’t miss the broken springs and depressed couch cushions, one of which is currently propped up by an old blanket. He seemed to study its leather scars and was either repulsed or enthralled by the smells.

Oh, the smells. There are moments when a little bit of weight in the right spot will launch scents into the air that if bottled would be labeled a weapon of mass destruction.

I once had a cousin visit who was born without a sense of smell. The couch cured him.

Seven years ago when the stork brought our tiny and tender Goldendoodle home, he was banned from the couch. (The pooch, not the stork.) But when the dog hit 110 pounds, he began banning us.

And yet there it still sits. Ten years after purchase and at least three years after neighbors recommended replacing it during a Friday night furniture intervention.

“Wright family, we love you. But your couch needs help.”

Sure, we've considered swapping it many times. Even in the last few weeks, we’ve pondered saying goodbye to our old friend. But whenever we get serious about a change, we remember all the things that the couch has witnessed and the support it’s provided.

We have changed diapers on it; which probably explains a few things. (See paragraph seven.)

The couch has held us when we’ve laughed until we've cried and cried until we've laughed. While snuggling we've watched movies and home videos, golf tournaments, and global tragedies.

We’ve napped there on lazy Sunday afternoons and slept on it all night when too lazy to go upstairs.

Every single member of my family has been nursed to health on it when a cold, flu, or broken bone came to visit.

We've leaped over it, around it, and found things under it that could have come from a fast food time capsule.

It’s been a fort, a desk, a snack bar, and an obstacle course finish line.

My family has studied the scriptures on it and prayed around it literally thousands of times.

As I ponder the memories embedded in the leather, I realize how often I’ve been far too hasty to discount or discard things which have lost their luster. Maybe I’ve fallen prey to the notion of a cheaply-made world where so much is expected to wear out quickly, then be tossed and replaced.

At the first sign of wear and tear and blemish, many of us we trash everything from furniture to shoes. Embarrassed by imperfections and worried what people will think, imperfect people like me are so quick to cast aside things that still bring joy, still serve us, and forever hold memories that cannot easily be replaced.

Now I know my old leather friend can’t last forever. At some point, it will be time to declare out with the old and in with the new. But for now, I’ll enjoy every slash and scratch and the memories they trigger.

And maybe one day we’ll need two blankets to prop up that flat corner of the couch. But we’ll cross that bridge—or cushion—when we come to it.