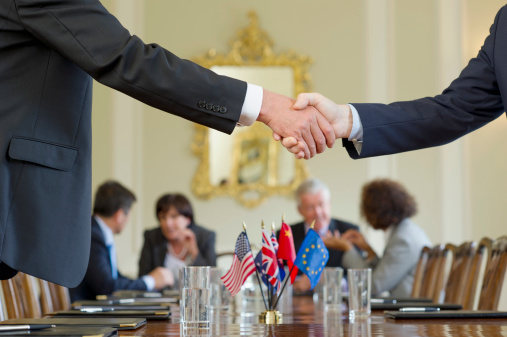 The delegation of power to rule in the earthly kingdom of Jesus Christ will be necessary during the Millennium because He will not always be physically present on the earth. “Christ and the resurrected Saints will reign over the earth, but not dwell on the earth,” said Joseph Smith. They will rather “visit it when they please or when [it is] necessary to govern it.”1 Likewise, the Prophet taught the following: “That Jesus will be a resident on the earth a thousand [years] with the Saints is not the case. But [He] will reign over the Saints and come down and instruct [them] as He did the five hundred brethren [after His resurrection (see 1 Cor. 15:6)]. And those of the first resurrection will also reign with Him over the Saints.”2

It is important to understand, however, that not everyone who administers the kingdom of God on the earth during the Millennium will actually hold membership in the household of faith. George Q. Cannon taught this principle irrefutably.

We have been taught from the beginning this important principle, that the Church of God is distinct from the kingdom of God. Joseph [Smith] gave us the pattern before he died. He gave his brethren an example that has not been forgotten up to this day. He impressed it upon them, that men, [who were] not members of the Church, could be members of the kingdom that the Lord will set up when He reigns. . . . In the minds of all of us who understand this matter there is a clear distinction between the Church in its ecclesiastical capacity and that which may be termed the government of God in its political capacity.3

The political entity President Cannon referred to was an organization sometimes called the Council of Fifty. The Encyclopedia of Mormonism defines this council as a group sanctioned by the Prophet during the Nauvoo era of Church history. It championed scriptural ethics and the responsibilities and protections of the United States Constitution, and its aim was to establish the seed of God’s theocratic millennial kingdom in a pluralistic society. The First Presidency and Quorum of the Twelve Apostles belonged to the Council of Fifty (with the Church President in charge), but three of the members of the council were not members of the restored Church.4 Joseph Fielding Smith emphasizes the significance of this mixture in the council:

After Christ comes, all the peoples of the earth will be subject to Him, but there will be multitudes of people on the face of the earth who will not be members of the Church; yet all will have to be obedient to the laws of the kingdom of God, for it will have dominion upon the whole face of the earth. These people will be subject to the political government, even though they are not members of the ecclesiastical kingdom or [the restored Church of Jesus Christ].5

President Brigham Young adamantly taught that the existence of the millennial kingdom will not nullify any person’s freedom of religion, declaring, “If the Latter-day Saints think, when the kingdom of God is established on the earth, that all the inhabitants of the earth will join the Church called Latter-day Saints, they are egregiously mistaken. I presume there will be as many sects and parties then as now.”6 On another occasion, President Young stated that:

When the kingdom of God is fully set up and established on the face of the earth, and takes the pre-eminence over all other nations and kingdoms, it will protect the people in the enjoyment of all their rights, no matter what they believe, what they profess, or what they worship. . . . [It] will sustain and uphold every individual in what they deem their individual rights, so far as they do not infringe upon the rights of their fellow creatures . . . [and] so far as their notions [are] not incompatible with the laws of the kingdom.7

Neal A. Maxwell does not seem to think that social diversity during the thousand-year reign of Christ will generate social disorder—as sometimes occurs in the present telestial world. He says, “We understand, of course, that there will be many nonmembers of the Church living during the Millennium, but there will be a clear willingness by all the good and decent men and women of all the races, creeds, and cultures to abide by a terrestrial law.”8

Dual Capitals of the Kingdom

One final aspect of the millennial government of God should be mentioned—the location of the capital of the kingdom. Joseph Fielding Smith, in an official Church publication, states: “There are to be two great capitals. One [in the] Jerusalem of old and the other [in] the City of Zion, or New Jerusalem. The latter is to be on this [American] continent. The one will be the Lord’s headquarters for the people of Judah and Israel his companions; the other for Joseph and his companions on the Western Hemisphere, which was given to Joseph and his seed after him as an everlasting inheritance.”9 According to Elder Bruce R. McConkie, “the building of these two world capitals will commence before the second coming and continue during the millennium.”10 The book of scripture most often appealed to for support of this doctrine is Isaiah: “Out of Zion shall go forth the law, and the word of the Lord from Jerusalem” (Isa. 2:3); likewise, “the Lord of hosts shall reign in mount Zion, and in Jerusalem” (Isa. 24:23). This duality is also referred to in Doctrine and Covenants 133:21, where specific mention is made of the voice of the Lord being uttered from the two locations. In certain Book of Mormon texts, the Savior explains that at the New Jerusalem “the powers of heaven” will come down among the Lord’s people and that He Himself will be “in the midst” of them (3 Ne. 20:22; 21:23–25). A parallel text in modern scripture clarifies that this will be connected with the administration of divine law: “For the Lord shall be in their midst, and His glory shall be upon them, and He will be their king and their lawgiver” (D&C 45:59). In referring to the situation at Old Jerusalem, the Prophet Joseph Smith explains that “then shall the law of the Lord go forth from Zion and the word of the Lord to the priests and through them from Jerusalem.”11 Orson F. Whitney proposes that we think of the dual capitals of Zion and Jerusalem from an interesting Old Testament perspective:

David’s ancient empire, which parted in twain, forming the kingdom of Judah and the kingdom of Israel, may it not have been a foreshadowing of God’s greater empire of the last days, which will consist of two grand divisions—two in one? Here upon the Land of Zion, “a land choice above all other lands” [Ether 2:10], the children of Joseph, the descendants of Ephraim, are even now assembling to make preparation for Messiah’s advent. The Jews will greet Him at Jerusalem. Christ’s kingdom will have two capitals, one in the Old World, one in the New; one in America, the other in Palestine. “For out of Zion shall go forth the law, and the word of the Lord from Jerusalem” [Isa. 2:3].12

Regardless of which capital Latter-day Saints may find themselves associated with in the future, they have been instructed by the King of the entire empire to follow the example of Jesus Christ in praying to the Lord “that His kingdom may go forth upon the earth” and prosper, that when the Son of Man descends and unites with that kingdom God may be glorified on earth as He is in heaven (D&C 65:5–6; cf. Matt. 6:9–10).

7. Ibid., 2:309–10. President Young asked, “When the kingdom of heaven spreads over the whole earth, do you expect that all the people composing the different nations will become Latter-day Saints? If you do, you will be much mistaken. Do you expect that every person will be destroyed from the face of the earth, but the Latter-day Saints? If you do, you will be mistaken. . . . [T]he order of society will be as it is when Christ comes to reign a thousand years; there will be every sort of sect and party, and every individual following what he supposes to be the best in religion, and in everything else, similar to what it is now. Will there be wickedness then as now? No. . . . [T]he veil of the covering may be taken from before the nations, and all flesh see [Christ’s] glory together, and at the same time declare they will not serve Him. . . . [During the Millennium] the different sects of Christendom [will not] be allowed to persecute each other. What will they do? They will hear of the wisdom of Zion, and . . . will come up to Zion to inquire after the ways of the Lord, and to seek out the great knowledge, wisdom, and understanding manifested through the Saints of the Most High. They will inform the people of God that they belong to such and such a church, and do not wish to change their religion” (ibid., 2:316). President Young also taught that although “all nations . . . . will be obliged to acknowledge [Jesus’] kingly government” during the Millennium, yet “there will still be millions on the earth who will not believe in Him” (ibid., 7:142). Likewise, Joseph Fielding Smith taught that “some members of the Church have an erroneous idea that when the millennium comes all of the people are going to be swept off the earth except righteous members of the Church. That is not so. There will be millions of people, Catholics, Protestants, agnostics, [Muslims], people of all classes, and of all beliefs, still permitted to remain upon the face of the earth, but they will be those who have lived clean lives, those who have been free from wickedness and corruption. All who belong, by virtue of their good lives, to the terrestrial order, as well as those who have kept the celestial law, will remain upon the face of the earth during the millennium” (DS, 1:86).

9. CHMR, 2:172. Similarly, James E. Talmage states: “Two gathering centers are distinctively mentioned, and the maintenance of a separate autonomy for the ancient kingdoms of Judah and Israel is repeatedly affirmed in scripture, with Jerusalem and Zion as the respective capitals. In the light of modern revelation, by which many ancient passages are illumined and made clear, we hold that the Jerusalem of Judea is to be rebuilt by the reassembled house of Judah, and that Zion is to be built up on the American continent by the gathered hosts of Israel, other than the Jews. When such shall have been accomplished, Christ shall personally rule in the earth, and then shall be realized the glad fulfillment: ‘For out of Zion shall go forth the law, and the word of the Lord from Jerusalem’ (Isa. 2:3; see also Joel 3:16; Zeph. 3:14)” [VM, 167].

11. WJS, 67; emphasis added. This statement by the Prophet seems to support an idea proffered by Bruce R. McConkie, who interprets the phrase in Isaiah 2:3—“out of Zion shall go forth the law”—to mean that the New Jerusalem will be “the seat of government,” and the phrase “the word of the Lord from Jerusalem” to mean that Old Jerusalem will be “the spiritual capital of the world” (Bruce R. McConkie, The Mortal Messiah [Salt Lake City: Deseret Book, 1979], 1:95).