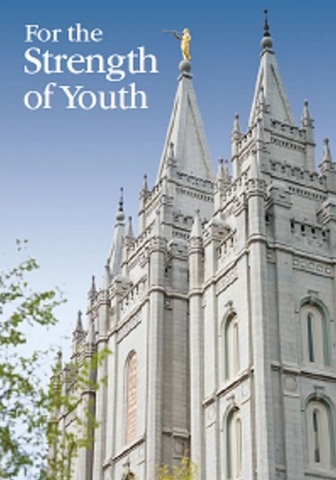 Image of the 2011 For the Strength of Youth from Wikimedia Commons.

In December 2011, the Church announced it would release a new and updated version of the pamphlet. For me, though, it didn’t seem like we were really that far removed from 2001. Had things really changed that much? The 2001 edition seemed to be sufficient for today’s youth—until I looked through the 2011 edition. It’s interesting to note how much things actually have changed. A lot of material in the updated version of FSOY is the same as before, but some additions are clearly vital for our time. In the “Music and Dancing” section, for instance, youth receive this counsel: “Keep your music at a reasonable volume, and remove your earphones when others are talking to you or want you to be part of their activities.”

Another interesting and certainly important addition comes from the section “Sexual Purity.” It counsels youth to “avoid situations that invite increased temptation, such as late-night or overnight activities away from home or activities where there is a lack of adult supervision.” Nearly every section has been expanded by a paragraph or more, and there's even a whole new section--"Work and Self-Reliance." Would the Church have made these additions to the pamphlet if they weren’t important for our time?

Even though FSOY has changed, the principles have remained consistent. “The standards have not changed, but times have changed,” said Elaine S. Dalton, current Young Women general president. “For the Strength of Youth has been revised to address the issues youth face today—to teach them the doctrine behind the standards and the promised blessings of obedience.”

To see the updated For the Strength of Youth pamphlet online, click here.