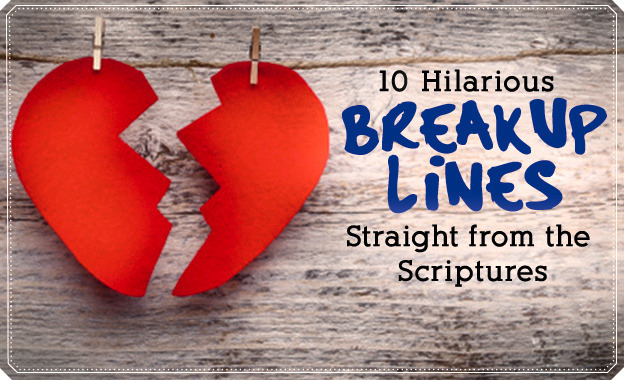 6. “Yea, I hated all my labour which I had taken . . . because I should leave it unto the man that shall be after me.”

This one’s for the guys that always end up breaking up with a girl who gets engaged to someone else three months later (Eccl. 2:18).

Nothing’s worse than being constantly turned down. You’re better off without them! (Proverbs 1:24)

8. “It is better to dwell in the wilderness, than with a contentious and an angry woman.”

No one wants to be with someone who’s constantly frustrated and angry. Trust me, the wilderness will keep you better company than they will (Proverbs 21:19).

They’ll definitely know they’ve been put in the “friend zone” if you call them your sister or brother (Proverbs 7:4).

And last but not least, there’s the Biblical version of “We need to talk.” And nothing ever really needs to be said after that. Message heard, loud and clear. (Acts 21:37)

Check out Break Up with the World by Hank Smith.

In this entertaining and inspirational talk, Brother Smith explains the importance of “breaking up” with the things of the world that keep us from getting closer to the Savior. This hilarious talk will leave you in stitches while also giving you some serious food for thought. Find it at Deseret Book.