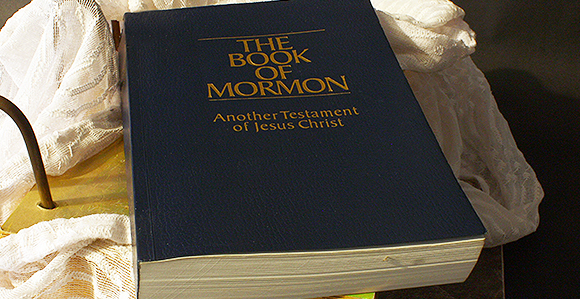 5 Things You Probably Didn't Know About the Three Nephites

The three Nephites—few in the Church have not heard about these translated beings. Like the apostle John, these three disciples of Christ chose to "live to behold all the doings of the Father unto the children of men" (3 Nephi 28:7), meaning they are translated beings who will live on the earth until the Second Coming.

However, beyond 3 Nephi 28, there is not much else written in the scriptures about these three, translated disiciples. In fact, the prophet Mormon was even forbidden from writing their names. But there are a few fascinating things we know about these disciples and their purposes on this earth. From their potential names to who they can appear to, here are five things we know about the three Nephites.

The Book of Mormon contains the names of the 12 disciples—including the three Nephites.

Assuming their names have not changed or were not altered by Mormon, we do have the names of the 12 disciples chosen by Christ in the Book of Mormon—including the three Nephites.

In 3 Nephi 19:4, we learn the names of the 12 disciples Christ chose among the people after appearing to the Nephites and Lamanites in the Americas.

"And it came to pass that on the morrow, when the multitude was gathered together, behold, Nephi and his brother whom he had raised from the dead, whose name was Timothy, and also his son, whose name was Jonas, and also Mathoni, and Mathonihah, his brother, and Kumen, and Kumenonhi, and Jeremiah, and Shemnon, and Jonas, and Zedekiah, and Isaiah—now these were the names of the disciples whom Jesus had chosen—and it came to pass that they went forth and stood in the midst of the multitude" (3 Nephi 19:4).

Nephi, Timothy, Jonas, Mathoni, Mathonihah, Kumen, Kumenohi, Jeremiah, Shemnon, Jonas, Zedekiah, and Isaiah were all chosen by Christ to minister to the Nephites and Lamanites. Of those 12, we know three chose to be translated and become what we refer to as the three Nephites.

In fact, we know from 3 Nephi 28:25 that Mormon was about to write the names of the three Nephites but "the Lord forbade; therefore I write them not, for they are hid from the world."

While we do not know the names of the three Nephites specifically, it is possible that their names could have been among those of the apostles called by Christ.

There could be more than just "three" translated Nephites.

While we know there were at least three translated Nephites, there is evidence in the scriptures and from commentary from Church leaders to suggest that there could be more.

When Alma the younger departed out of Zarahemla into the land of Mulek, there isn't much to suggest that he was seen again, at least not as a non-translated being. From Alma 45, we know he was "never heard of more" and "his death or burial we know not of" (Alma 45:18). And in Alma 45:19 we learn "the saying went abroad in the church that he was taken up by the Spirit, or buried by the hand of the Lord, even as Moses."

The last part about being "taken up by the Spirit" or "buried by the hand of the Lord" sound contradictory when paired with Duet. 34: 5–7, which states that Moses was buried in a "valley in the land of Moab" (v. 6) and that he was "one hundred and twenty years old when he died" (v. 7).

However, according to Bruce R. McConkie:

“Moses, Elijah, and Alma the younger, were translated. The Old Testament account that Moses died and was buried by the hand of the Lord in an unknown grave is an error. (Deut. 34:5–7.) It is true that he may have been ‘buried by the hand of the Lord,’ if that expression is a figure of speech which means that he was translated. But the Book of Mormon account, in recording that Alma ‘was taken up by the Spirit,’ says, ‘the scriptures saith the Lord took Moses unto himself; and we suppose that he has also received Alma in the spirit, unto himself.’ (Alma 45:18–19.) It should be remembered that the Nephites had the Brass Plates, and that they were the ‘scriptures’ which gave the account of Moses being taken by way of translation. As to Elijah, the account of his being taken in ‘a chariot of fire … by a whirlwind into heaven,’ is majestically set out in the Old Testament" (2 Kings 2.) (Mormon Doctrine, 2nd ed. [1966], 805).

Similarly, Nephi, son of Helaman, also disappeared while traveling out of the land of Zarahemla. Though there is less evidence here that he was translated, it appears he was not planning to return, having given "charge unto his son Nephi, who was his eldest son, concerning the plates of brass, and all the records which had been kept, and all those things which had been kept sacred from the departure of Lehi out of Jerusalem" (3 Nephi 1:2).

Similarly to Alma the younger, no one knew where Nephi went, and no one knew anything about his death or his burial save it "could nowhere be found in all the land" (3 Nephi 2:19).

While it is not clear how many translated beings exist, it is possible that there are more translated Nephites than the three disciples.

The three Nephites can choose who can see them.

From 3 Nephi we learn that the three Nephites can choose to be seen or not be seen by whomever they desire. This isn't because of anything they do on their own volition; they must ask for it in prayer and the power to do this comes from Heavenly Father.

"And they are as the angels of God, and if they shall pray unto the Father in the name of Jesus they can show themselves unto whatsoever man it seemeth them good" (Nephi 28:30).

Furthermore, Satan and evil men and women have no power over translated beings, including the three Nephites. In fact, when the three Nephites were in mortal peril at the hands of those who wished them harm, they escaped each time unscathed.

19 And they were cast into prison by them who did not belong to the church. And the prisons could not hold them, for they were rent in twain.

20 And they were cast down into the earth; but they did smite the earth with the word of God, insomuch that by his power they were delivered out of the depths of the earth; and therefore they could not dig pits sufficient to hold them.

21 And thrice they were cast into a furnace and received no harm.

22 And twice were they cast into a den of wild beasts; and behold they did play with the beasts as a child with a suckling lamb, and received no harm (3 Nephi 28:19–22).

However, their ministry is ultimately determined by Heavenly Father. As the iniquity grew among the Nephites and the Lamanites after Christ's appearance in the Americas, the three Nephites were eventually taken out of the land to an unknown location.

13 But wickedness did prevail upon the face of the whole land, insomuch that the Lord did take away his beloved disciples, and the work of miracles and of healing did cease because of the iniquity of the people (Mormon 1: 13).

16 And I did endeavor to preach unto this people, but my mouth was shut, and I was forbidden that I should preach unto them; for behold they had wilfully rebelled against their God; and the beloved disciples were taken away out of the land, because of their iniquity (Mormon 1: 16).

Though the three Nephites were taken out of the land of Zarahemla at about 326 AD, we know that they could, in fact, appear to those they wished because they ministered to Mormon and Moroni.

11 But behold, my father and I have seen them, and they have ministered unto us (Mormon 8:11).

They will be part of "great and marvelous works" before the Second Coming.

Jesus Christ's Second Coming will be "an event eagerly awaited by the righteous and dreaded or denied by the wicked" (Dallin H. Oaks, "Preparation for the Second Coming," lds.org). But there is still work to be done before Christ comes again to the earth.

Part of this work will be accomplished by the three Nephites. Mormon, when he writes of these disciples in 3 Nephi 28, refers to their works as "great and marvelous" (v. 31).

We also know from 3 Nephi 28 that they will preach until the Nephites and Lamanites, the Jews, the Gentiles, the scattered tribes of Isreal, and people of all nations, kindreds, tongues, and people (3 Nephi 28: 23, 27–29). We also know that the three Nephites "shall bring out of them unto Jesus many souls, that their desire may be fulfilled, and also because of the convincing power of God which is in them" (v. 29).

And though the three Nephites are not called apostles in the Book of Mormon, they have been endowed with authority to be special witnesses of Christ. As President Joseph Fielding Smith said:

While in every instance the Nephite Twelve are spoken of as disciples, the fact remains that they had been endowed with divine authority to be special witnesses for Christ among their own people. Therefore, they were virtually apostles to the Nephite race, although their jurisdiction was, as revealed to Nephi, eventually to be subject to the authority and jurisdiction of Peter and the Twelve chosen in Palestine” (Doctrines of Salvation 3:158; italics in original).

The three Nephites and other translated beings will eventually experience a death-like process.

When describing the state of the three Nephites, Mormon uses the word "transfiguration," but in 3 Nephi 28:17, he seems unclear about whether or not the three Nephites were mortal or immortal after they were "caught up into heaven" (v. 13). However, Mormon later writes that he inquired of the Lord to know what state the three Nephites were in and learned "that there must needs be a change wrought upon their bodies, or else it needs be that they must taste of death;" (v. 37) and that this change "was not equal to that which shall take place at the last day;" (v. 39).

Mormon also writes tha "in this state they were to remain until the judgment day of Christ; and at that day they were to receive a greater change, and to be received into the kingdom of the Father to go no more out, but to dwell with God eternally in the heavens" (v. 40).

So although the three Nephites are in a state in which they "shall never endure the pains of death" (v. 8), they must experience a change akin to a death-like process.

As Elder Bruce R. McConkie wrote, “This change from mortality to immortality, though almost instantaneous, is both a death and a resurrection” (McConkie, Mortal Messiah 4:390).

But where death can be bitter or even painful to those who are not translated, the three Nephites and other translated beings will experience no pain or sorrow when they encounter this death-like process, which Christ describes as happening in the "twinkling of an eye" (v. 8).

"There is no funeral, no mourning, no grave. For translated beings, their death is more like an ordinance than a time of parting and separation," according to rsc.byu.edu.

Doctrines of Salvation, Volume I-3, is an authoritative work, written by the most outstanding scholar of the gospel in the Church containing a wealth of explanations about a vast array of gospel topics, many of which can not be found in other sources. Add an authoritative source on issues frequently discussed today.