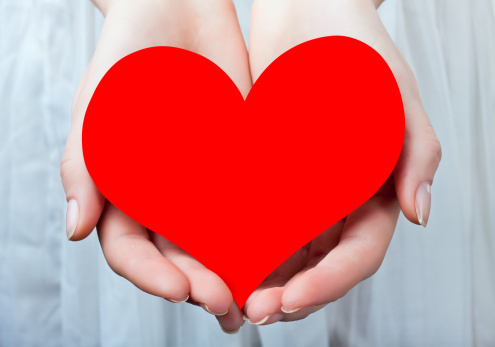 I was a divorced mother of two in my late thirties when I first entered the LDS mid-singles scene. Those years of dating took me on quite a journey—one filled with thrilling highs, as well as countless bumps and bruises to my heart and ego. But the love lessons I learned during that time ultimately made me stronger, wiser, and happier. So here they are: my six hard-learned lessons about love. Hopefully some of my experiences can help you better navigate the mysterious dating world.

Yes, this should be obvious, but it isn’t always easy. In the mid-singles world, at least in my experience, there were several spiritual, intelligent, attractive women for every active LDS man who bothered to show up to an event. Maybe this is why I especially saw women falling into the trap of trying to be what they thought men wanted them to be. I confess to being a “dating chameleon” for one guy in particular. I wanted to give him every reason to like me, so I suddenly found myself taking up his hobbies, abandoning my own interests, and downplaying my professional successes so he wouldn’t feel badly about his own lack of ambition. But at the end of the day, someone can’t fall in love with you if they don’t know the real you. And you won’t be happy with someone if you can never be yourself and let your true personality shine.

You finally found someone you are interested in, so it stands to reason you would want to make yourself as available to that person as possible, right? Wrong.

I hate to admit this, but in an effort to spend as much time as possible with someone, I fell into an unhealthy pattern. What started with one instance of, “Hey, I’m going to a baseball game with the guys tonight, but I should probably be finished around 11, so maybe I’ll stop by after that” set a terrible precedent for our dating relationship. He did whatever he wanted and then made a habit of “stopping by” later because he knew I would wait around for him and give up the opportunity to make my own plans. Clearly, I wasn’t his Plan A, even though he was mine.

Be wary of accepting last-minute dates. Again, it sets you up to be Plan B. The person who texts at 6:30 p.m. on a Friday night and assumes you will be available for a date in one hour is a) not a planner b) inconsiderate of your time and/or c) trying to keep all options open until the last possible moment and has decided there is nothing better to do, so he might as well see what you’re up to. Unless it was something completely unexpected like, “Hey, my boss just gave me front-row tickets to Phantom of the Opera tonight,” then I learned to turn down all last-minute offers, even if I didn’t have other plans. If you stick to this rule, the people you are interested in will either decide you’re worth the effort of planning ahead, or they’ll eventually disappear.

I once dated a guy who seemed to have it all. He was intelligent, confident, spiritual, successful, affectionate, and very charming. I especially loved the fact that he wasn’t afraid to tell me how he felt about me. He talked easily about all the fun dates we would go on and all the surprises he had planned for me. But that’s all it was—talk. He kept me “on the hook” for months by promising one thing or another (not that I was asking for anything, because I wasn’t). I just thought I needed to be patient while he finished his big project at work, but there was always a big project or business trip that kept him too busy to spend quality time with me. This was a hard lesson to learn because I am such a patient person, but now I know that if someone can’t seem to get around to keeping their word to you within a relatively short period of time, then it’s time to move on and find someone who will actually do what he means and means what he says.

It took me a while to figure this out, but the singles scene doesn’t look the same for everyone. I spent the first six months of post-divorce dating showing up to social events, and I hated them. It’s not that I didn’t meet some amazing people, because I did. But in general, the large group activities and house parties were just not my thing. But I continued to go, all the while wondering what was wrong with me and why I didn’t enjoy them. After receiving a spiritual prompting, I finally understood that if I had to constantly force myself to go, then it wasn’t the right scene for me. I dropped off the social radar, and I was instantly much happier. I wondered how I would meet people because online dating didn’t feel right either—until it did six months later. My stint online was brief, but I met an amazing man. We loved each other, and I thought I had found "the one" until after months of dating it became painfully clear that we wanted different things. We went our separate ways, but it was still an important relationship that taught me a lot. After the breakup, I took a sabbatical from all forms of dating until five months later when my friend set me up on a blind date. I have now been happily married to that blind date for a few years. The moral of the story: If a certain dating scene doesn’t feel right, then it isn’t. (This is obviously true for relationships, as well.) Trust yourself and the Spirit.

5. Time between relationships is priceless.

Okay, so once again you find yourself brokenhearted over someone you thought really could have been “the one.” Now what?

We all know people who jump from one relationship to another, but I think this is a huge mistake. If you are willing to look back at the dynamics of the failed relationship and take a good hard look at yourself and who you were in that relationship, then there are valuable lessons to be learned. Chances are good that you are evolving into a different person because of these new experiences. Take time to figure out who you are now and address the issues you still need to work on. This is what will help make you a better person and a more desirable partner. After all, even if you found “the one” while you were still an emotional disaster, he would most likely turn into “the one who got away” in a big hurry. Don’t wait for Prince Charming to come along and save you. Rescue yourself and become the same kind of person you want to attract.

► You'll also like: 3 Dangers of Dating the "Best" Singles

6. You get what you deserve.

When I look back at my dating relationships, I realize that I got exactly what I—deep down—thought I deserved. And it’s clear that for quite a while I didn’t believe I deserved very much.

After dating a string of emotionally unavailable men, I finally realized that I was giving them permission to treat me badly. I did some serious soul searching and discovered that I still felt like a failure because of my divorce and didn’t feel I deserved another chance at a loving, meaningful relationship. I’m sure these men could sense my insecurities and my doubts that anyone could ever really want me.

So I worked hard to change (see #5 above), and eventually I became whole. As trite as it might sound, I finally remembered who I was, what I had to offer, and what kind of relationship I deserved. And then I humbled myself enough to leave it in God’s hands. That isn’t to say I didn’t express to Him the deepest desires of my heart and ask for the blessing of a future marriage to a wonderful man—a blessing that took years longer than I would have liked. But I let go of the fear that there might not be someone out there for me. I let go of the fear that I wasn’t good enough for someone else to love. In fact, I stopped operating out of fear altogether. After that, the men who came into my life were of a much higher caliber, and I ultimately found the deeply loving and commited relationship I was looking for.

For more advice on dating, check out these great titles: 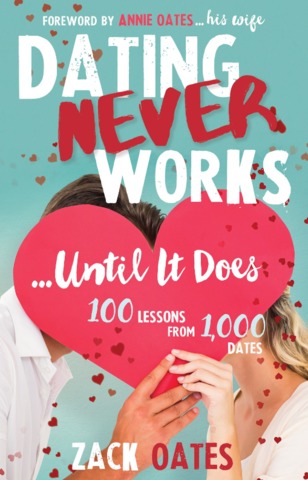 Tired of mixed messages, confusing signals, and of playing the dating game? Dating expert Zack Oates has experienced it all in this comical guide that will keep you happy and laughing. Dating Never Works Until It Does: 100 Lessons from 1,000 Dates is perfect for audiences in dating situations of all kinds. The author’s encouraging steps will help you find your celestial mate. 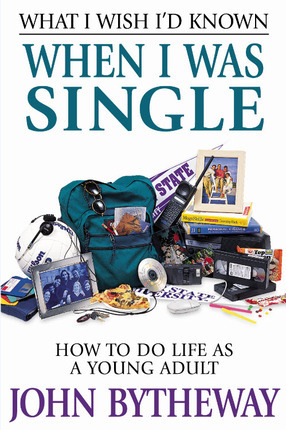 How will I know if I'm in love? Is there a “one and only” for me? How can I get over a bad breakup? I know marriage is important, but why is it so urgent? What do I do while I'm waiting?

These are the hard questions of the young single adult years, made all the harder by the pressure many feel to move from “solo” to “duet” status. In this insightful book, popular author John Bytheway explores how to do life as a young adult: what to expect, how to cope, and where to turn for answers.

You'll learn to stop focusing on things you can't control, to play the dating game in such a way that you'll have no regrets later, to express affection appropriately, to recognize when someone might be “the right one” for you — and when that someone might not be. Filled with counsel from Church leaders, John's personal experiences, and a healthy dose of humor, What I Wish I'd Known When I Was Single is a must-have guide to young adult life. 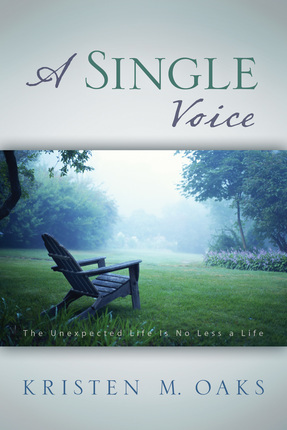 In a Church that is focused on family, singles can feel somewhat discounted and discouraged. Oftentimes the very resources meant to support people can inadvertently cause pain. In the book A Single Voice, author Kristen Oaks addresses questions such as:

A Single Voice addresses these concerns and offers valuable insights, personal reflections (including the story of the author's courtship and marriage to Elder Oaks), and rich advice for living life to the fullest as a single member. 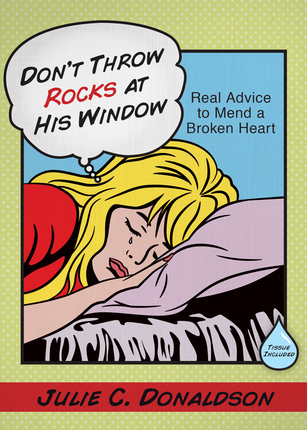 Don't do it. I know you want to. I know you want to pick up that jagged rock and just chuck it through his window. After all, he broke your heart. Worse, he threw it to the ground, danced on it, and then kicked it aside. But you don’t have to resort to criminal activity. There are better ways to get over your broken heart.

Don’t Throw Rocks at His Window is filled with practical remedies and fun, interactive ideas that will help you strengthen your heart, keep your perspective on what matters most, and find comfort through Heavenly Father’s blessings.

It is possible to survive a broken heart. What’s more, it’s possible to love again with a heart that is strong and sure and whole. So drop the rock, toss the tissue, and take the journey from hurt to healing.